All images courtesy of the WWE Network streaming service 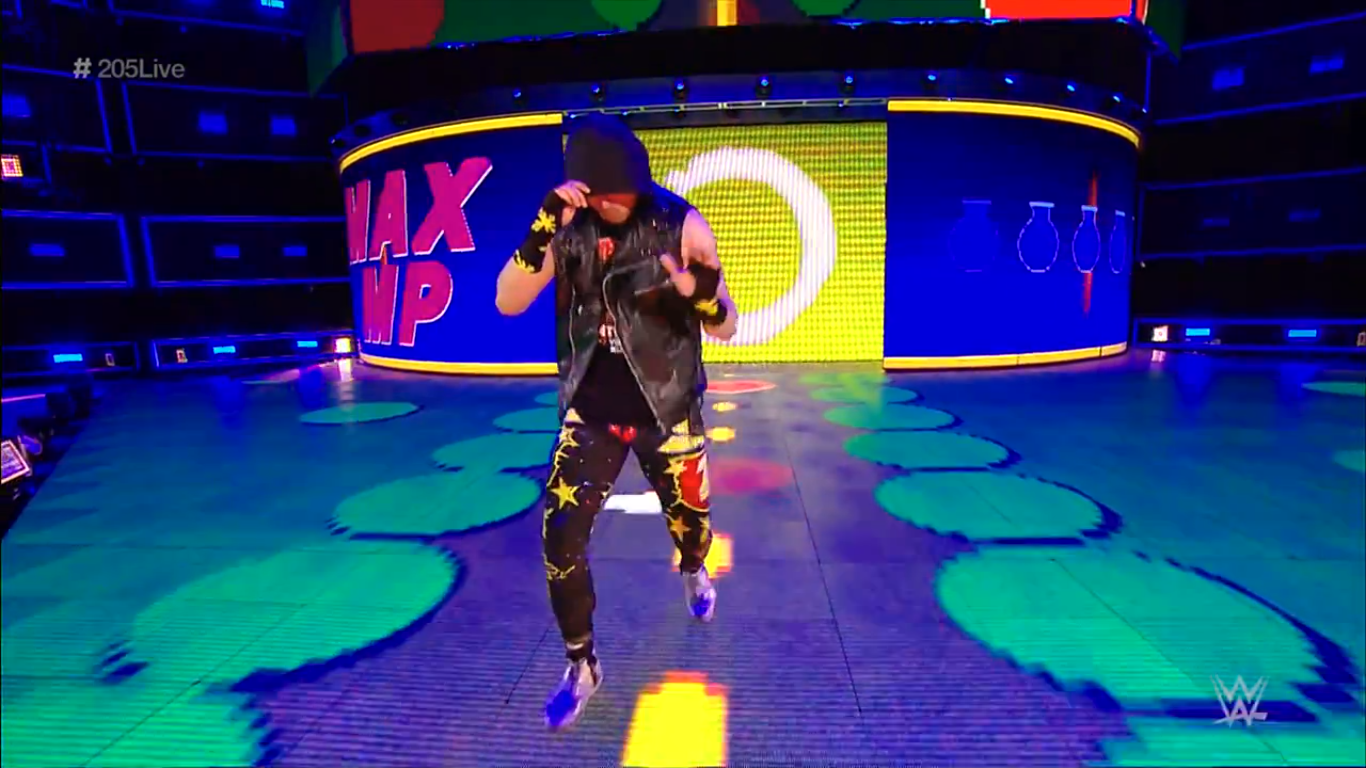 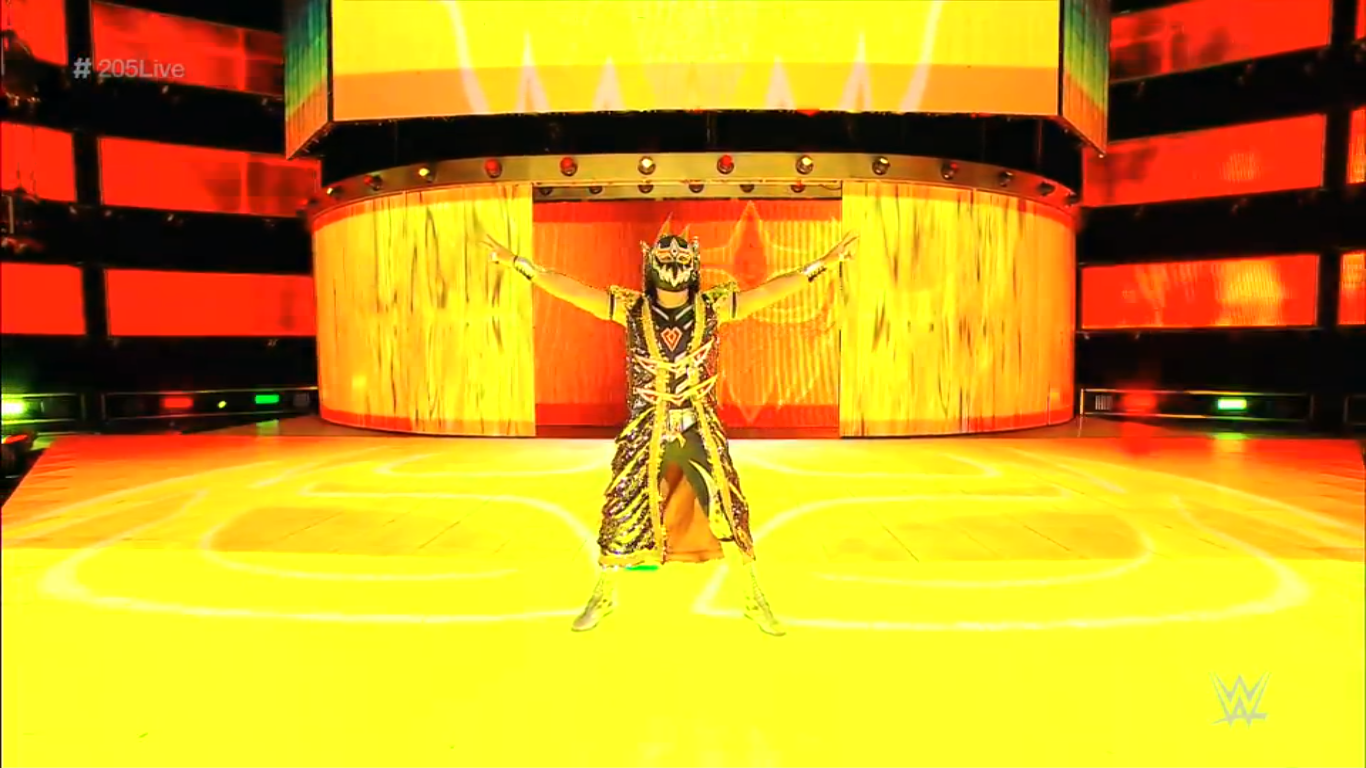 The “Cruiser-Great” threw a big tantrum after his first loss since his return, and now he looks to make up for it against the King of Ropes tonight!

The bell rings, TJP goes right at Metalik with a shoulder, and another. Cover, ONE, TJP is right on Metalik with the facelock. TJP puts a hammerlock on Metalik to then throw him into buckles, and then rock him with a European Uppercut. The inaugural New Era Cruiserweight Champion brings Metalik up again, but Metalik fights out and hits an elevated snapmare. Things speed up, TJP dodges the handspring but Metalik blocks the kick to dump TJP on his back. Metalik keeps moving, he acrobatically arm-drags TJP! 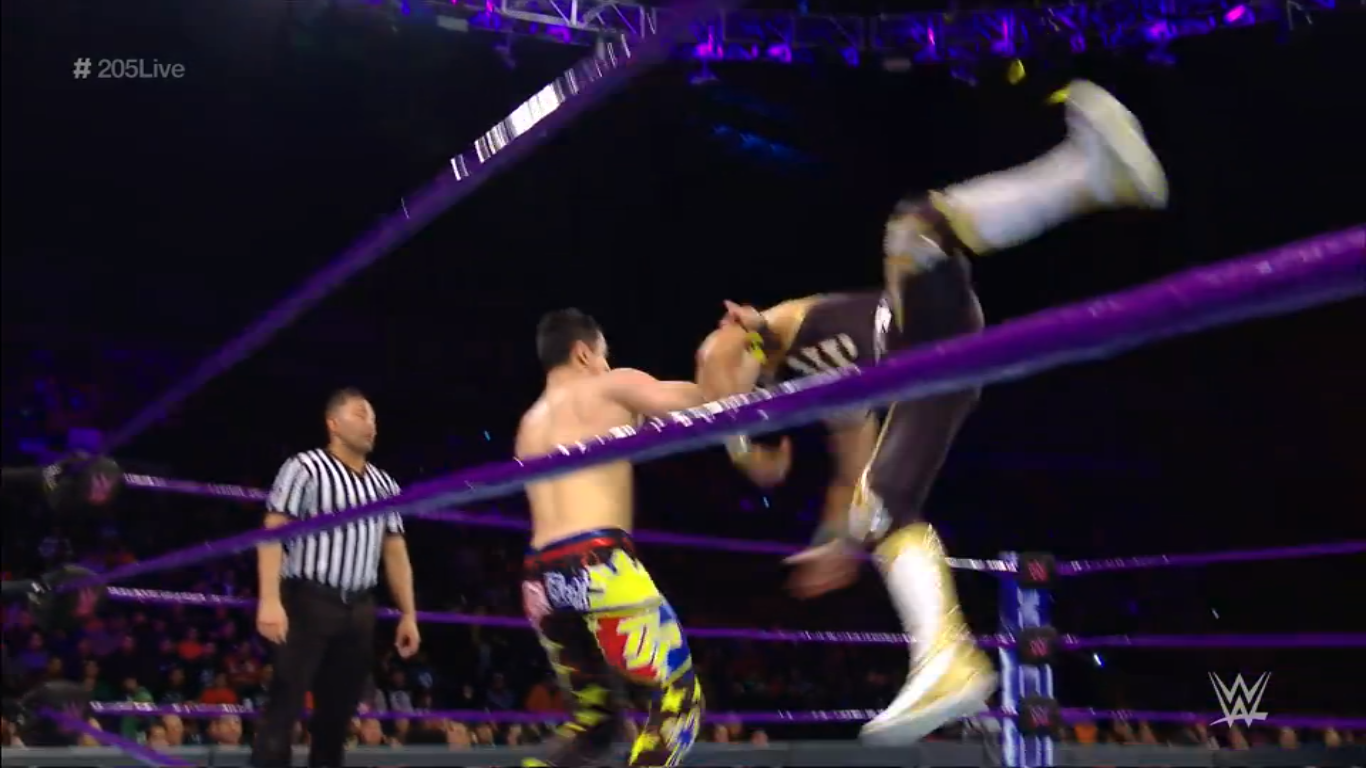 TJP swings but gets blocked and chopped. Kalisto is watching as Metalik leads TJP along into an acrobatic missile dropkick! 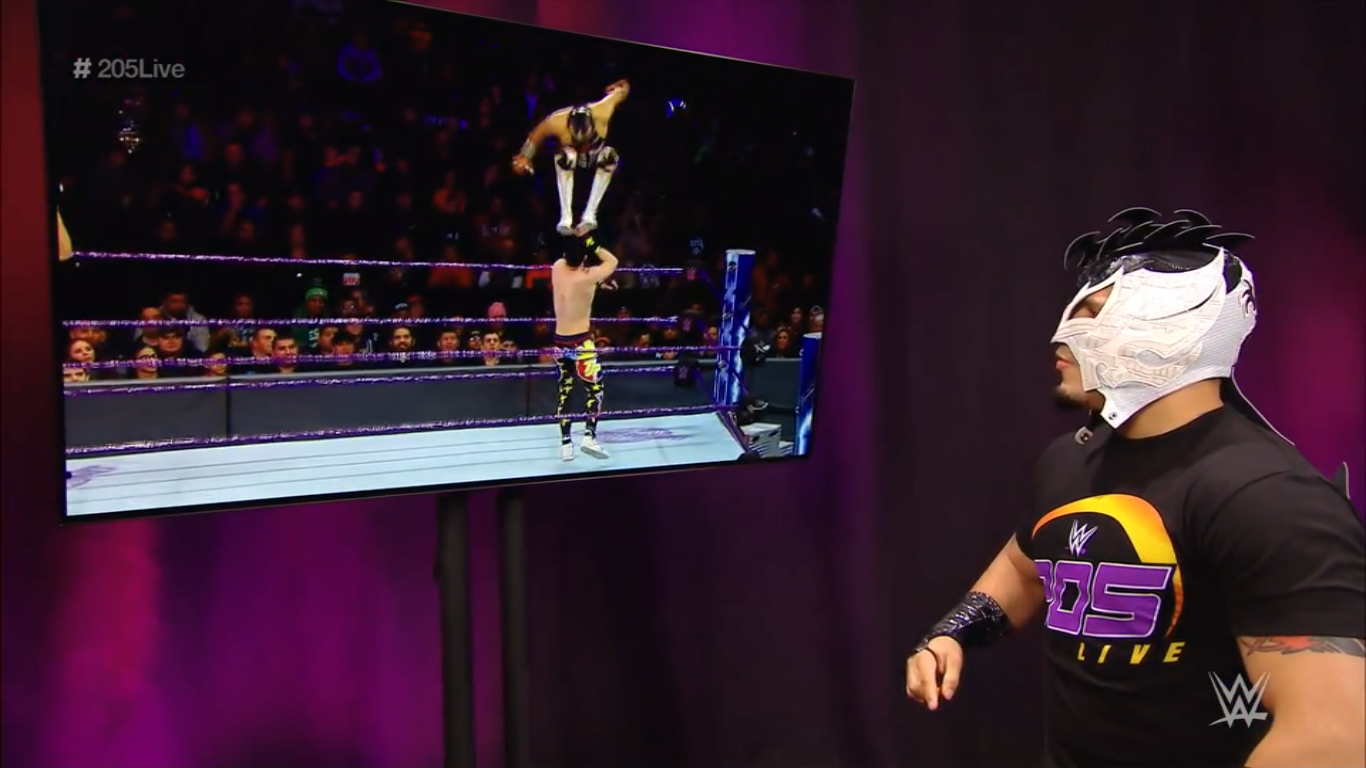 TJP rolls out of the ring and fans fire up as Metalik goes to the apron. TJP tries to trip Metalik up but Metalik mule kicks him away. Metalik adjusts and springboards for the Asai Moonsault! 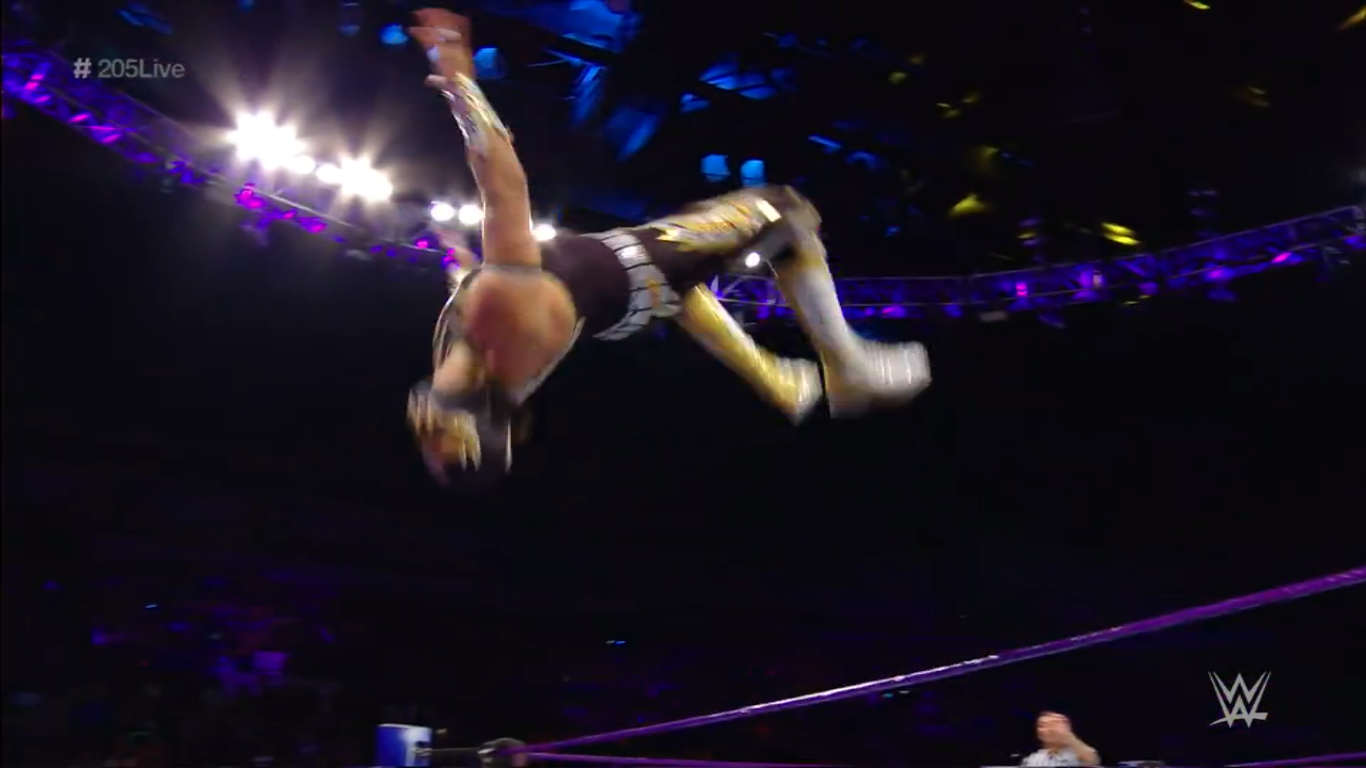 Direct hit takes TJP out! The fans cheer for the luchador as he brings TJP back into the ring. Cover, TWO, but Metalik keeps on him. He whips TJP to the corner, then runs in but gets a boot from TJP. TJP sees Metalik coming, alley-oops him to the corner but Metalik lands safely and mule kicks him away again. Metalik jumps back for the back elbow, but TJP dropkicks him out of the sky! The referee checks on Metalik, but TJP won’t give him time. He whips Metalik, then elbows him down. TJP drives an elbow into Metalik’s head, then rains rights down. TJP embraces the heat before dragging Metalik up. Scoop slam, then slingshot senton, TJP covers, TWO. TJP grows frustrated, but he keeps focus as he puts on the straitjacket chinlock. Fans rally for Metalik, and the luchador gets to his feet. TJP suplexes but Metalik slips out, then evades in the corner. Metalik hops up, but TJP trips him up! TJP then drags Metalik into the Tree of Woe, and runs corner to corner, but Metalik sits up to let TJP split himself down the middle on the post. Metalik adjusts while fans rally for him, he jumps from post to rope to high-flying crossbody! 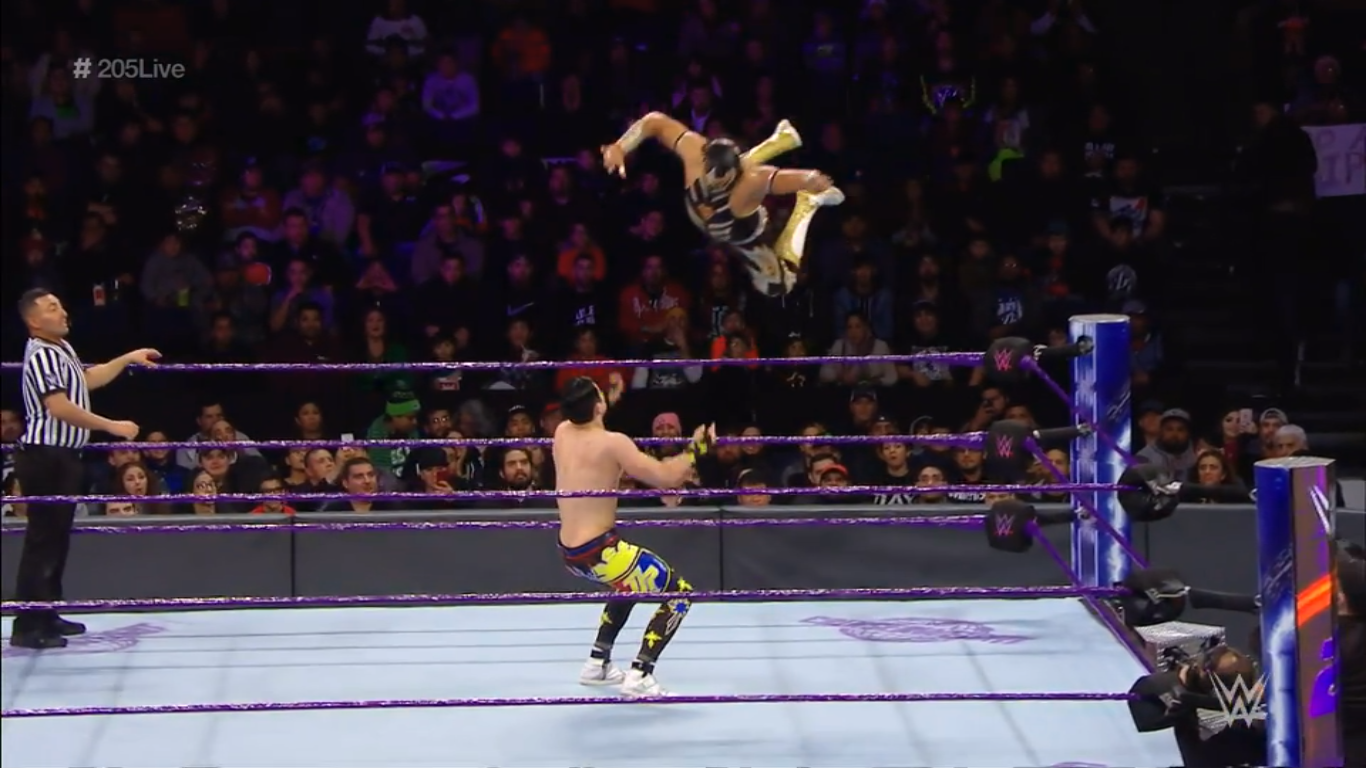 Direct hit again, but Metalik bounces off of the cover. He whips TJP at a corner but is reversed, TJP runs into a SUPERKICK! Metalik hits the Sling Dog, then keeps moving to walk the ropes for the whirlwind missile dropkick! The fans of Loredo fire up for Metalik as he goes back up, chanting “Lucha Libre!” Metalik walks the tight-rope, for the springboard elbow drop! 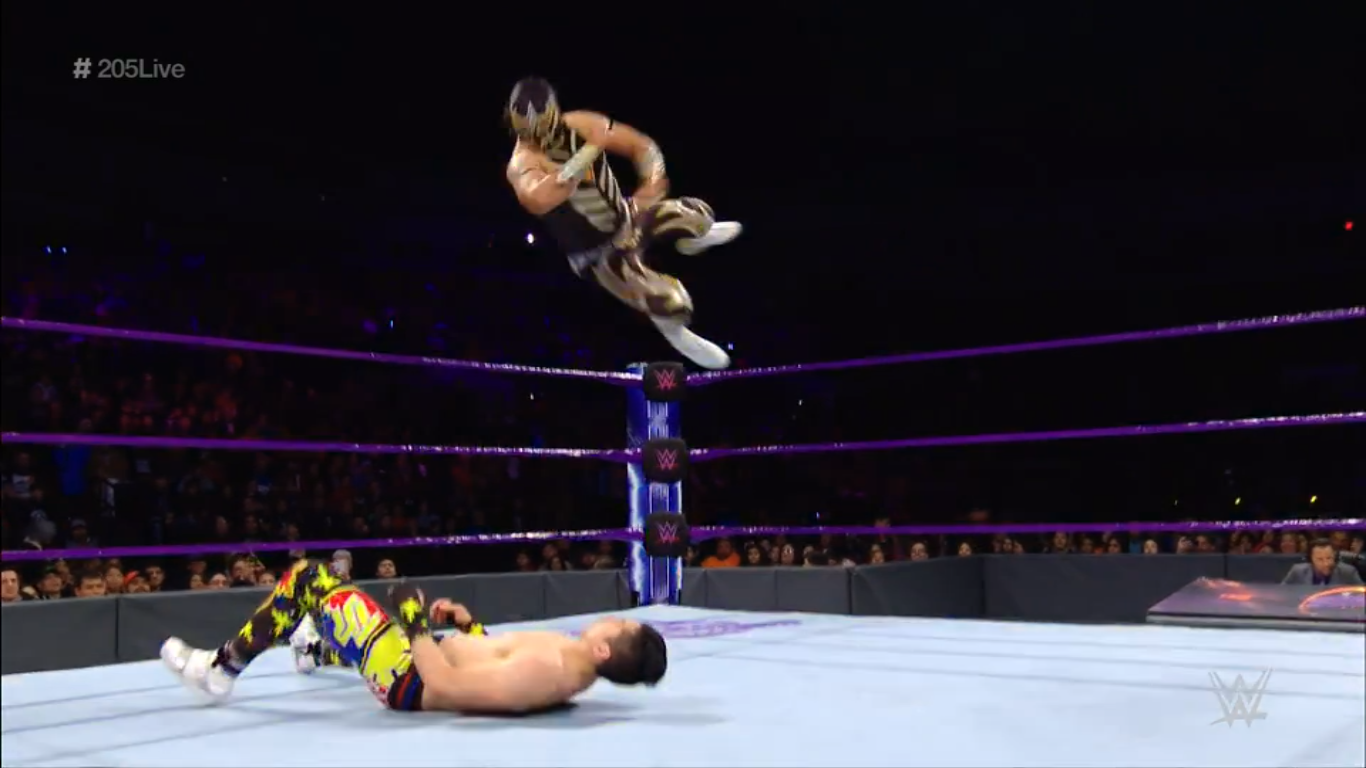 TWO! Metalik thought he had it. He brings TJP up, fireman’s carry, but TJP slips out and rips at the mask! TJP shoves Metalik into a buckle, then hits a springboard forearm. TJP keeps going, he gets the chicken wing lift but Metalik reverses with a victory roll! Metalik wins AGAIN! 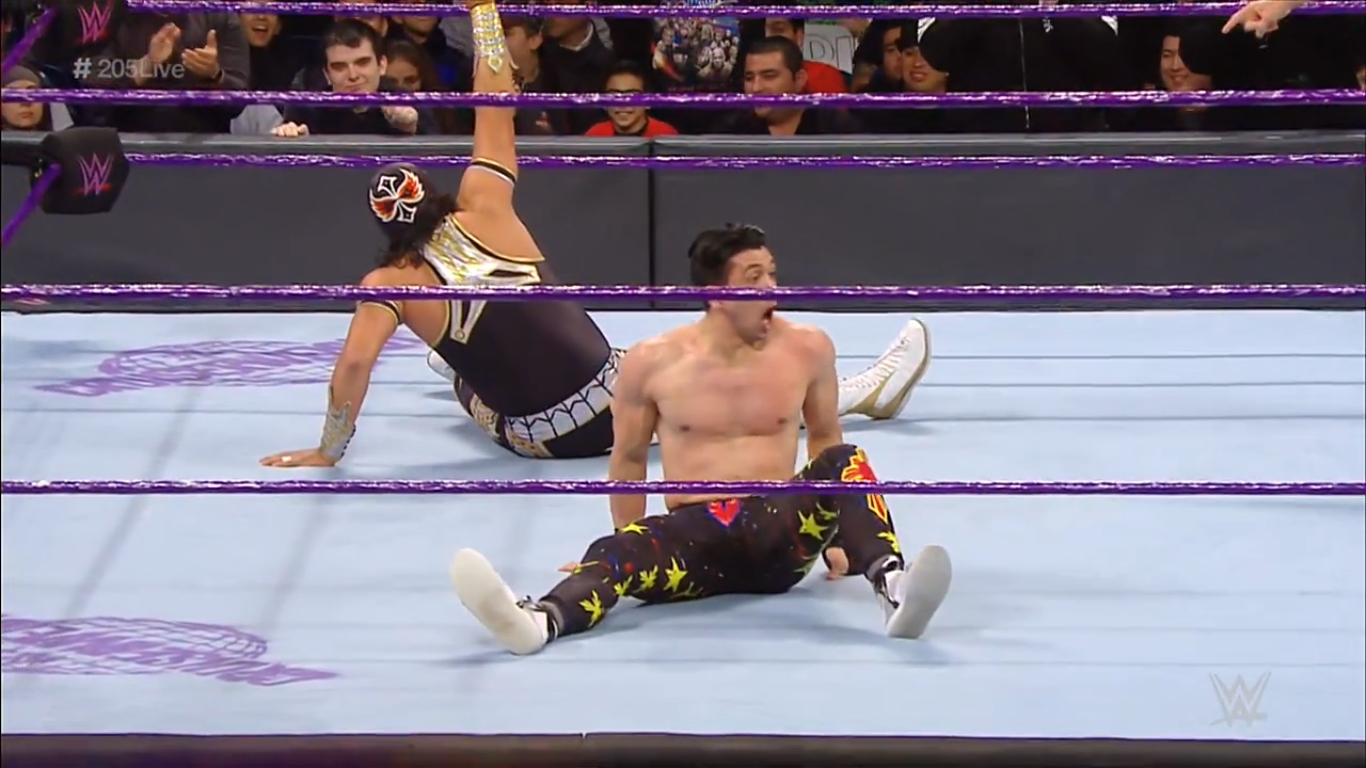 And clearly TJP is shocked! TJP lost two times in a row, and to the same man. The referee has him exit the ring peacefully this time, but it is clear he is seething just below the surface. How long until TJP explodes on everyone again? 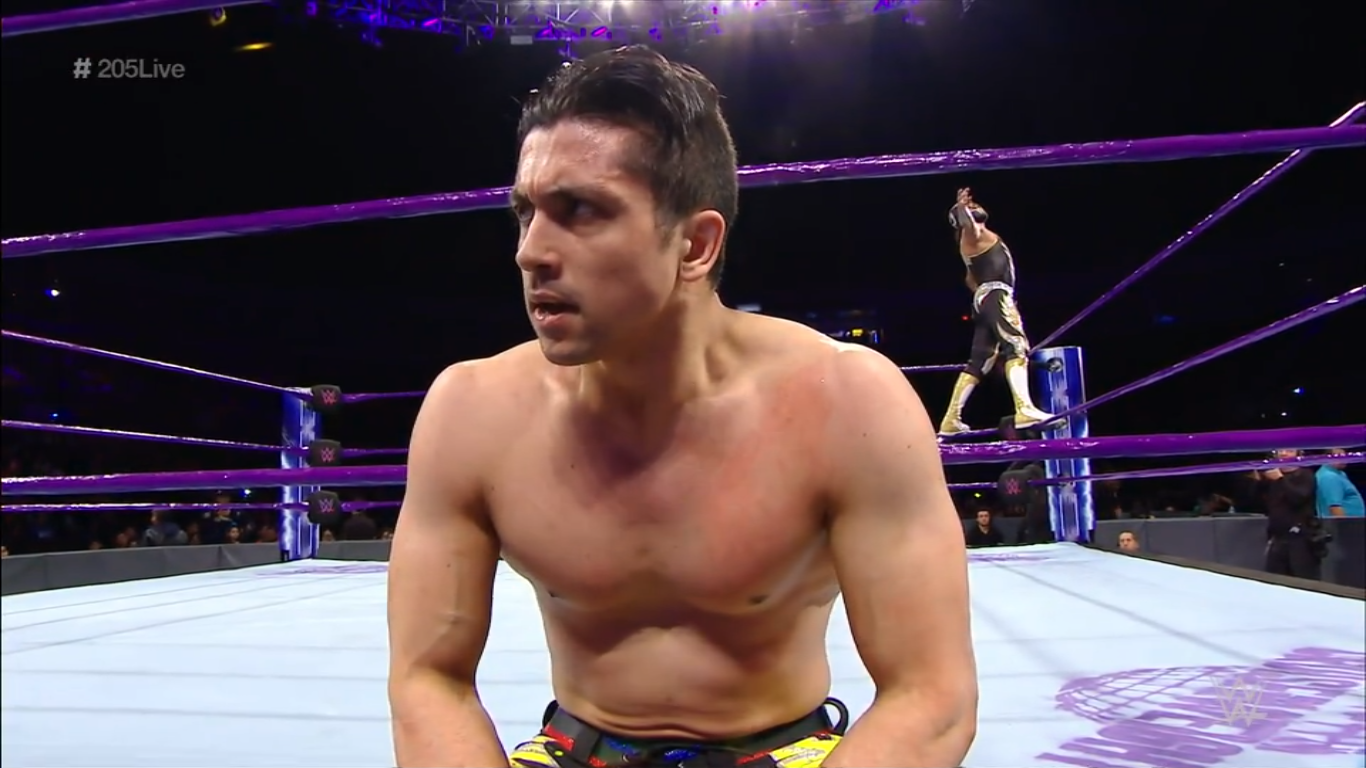 TJP makes it backstage, before erupting with rage. 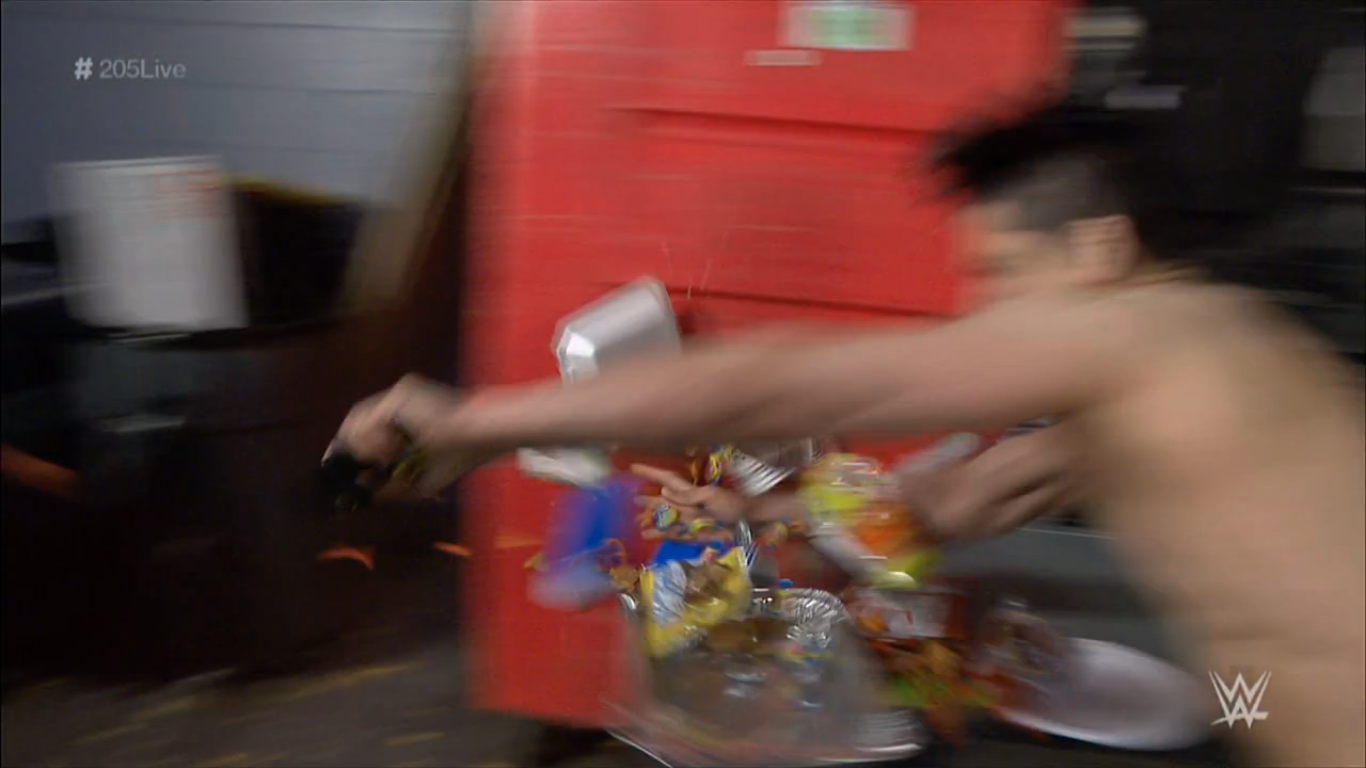 He sweeps snacks off a table, and fumes to himself before Dasha Fuentes comes over for an interview. Two weeks, two losses, is… Is he crying? No! TJP storms off, what will happen should he lose a third time? 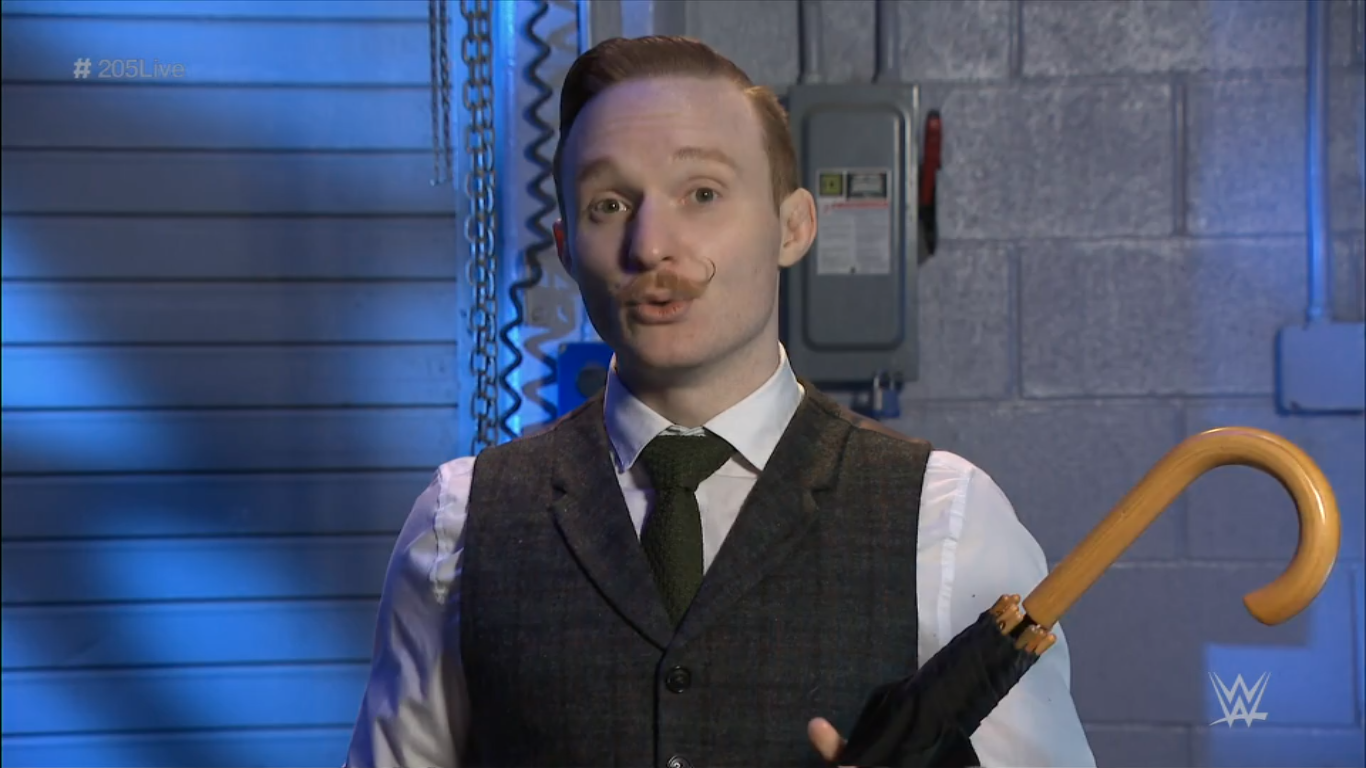 The Ungentle Gentleman knows that “for the past few weeks, I’ve been tortured.” He has been tortured by reliving THE Brian Kendrick’s skull cracking. In Gallagher’s attempts to avenge Kendrick, he has been tortured by his “underestimation of the ‘great’ Hideo Itami.” However, Kendrick’s lessons live on through Gallagher, and now Gallagher is The Gentleman with The Plan. And Gallagher has a plan for Itami. Every piece of armor has a weak spot, everyone has their secret. Gallagher will discover that weakness, and attack it from above, below, on all sides and right in Itami’s face. Itami will rue the day he joined the Cruiserweight Division.

Cedric Alexander heads to the ring. 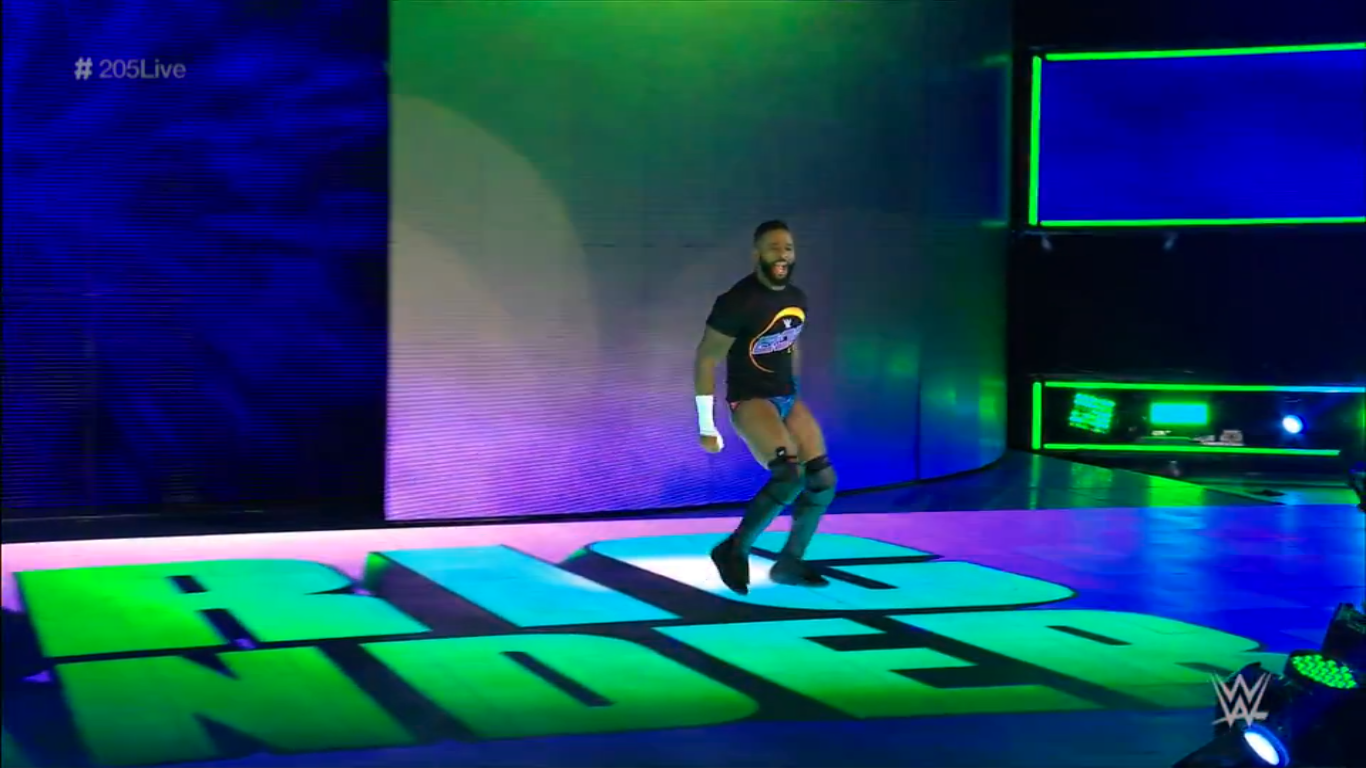 The Carolina Kid is the #1 Contender to the Cruiserweight Championship, and he is set to face Enzo Amore for said championship at the Royal Rumble. And he’s not alone, as the Bizarre One, Goldust, is also here tonight. 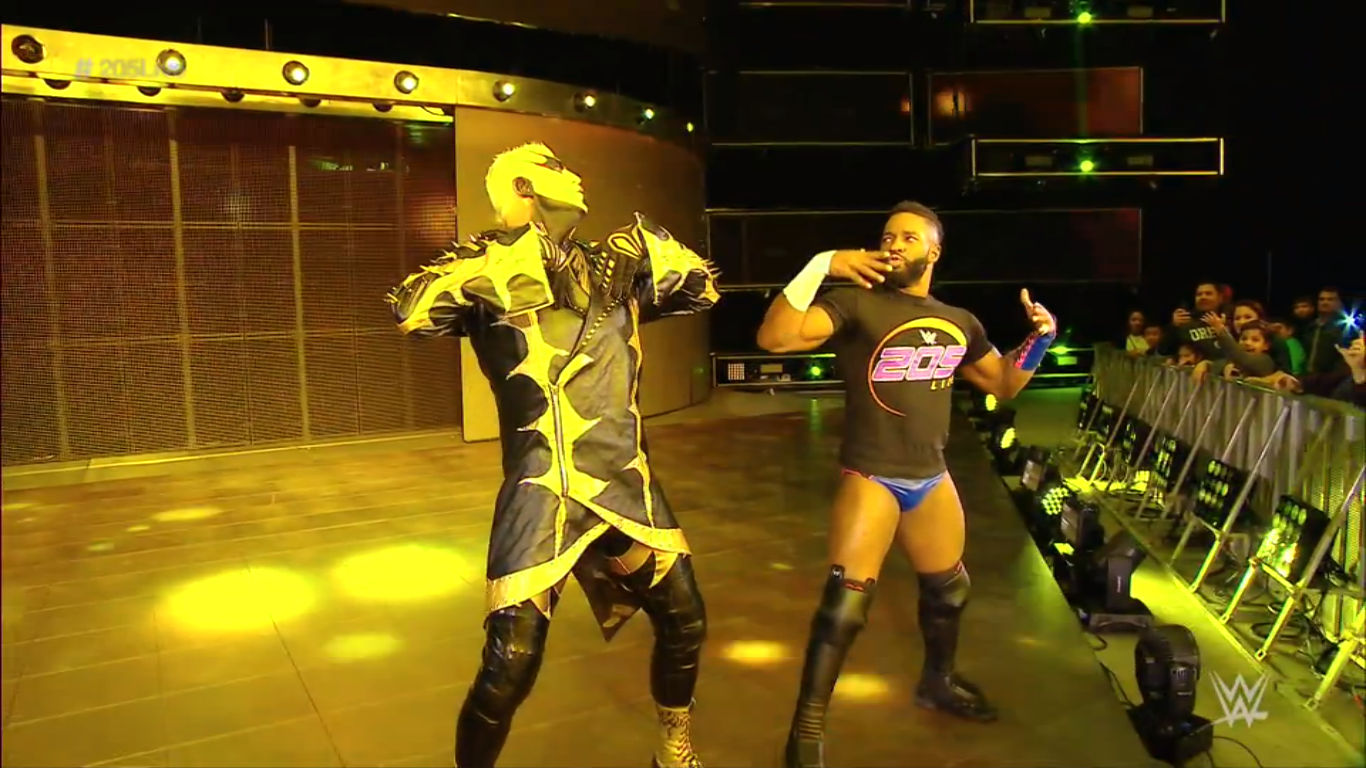 Alexander and Goldust go to the ring and pick up some mics. The fans chant for Goldust before he speaks. “Our lives are determined by opportunity. Even the ones we miss.” – The Curious Case of Benjamin Button, 2008. Some say the friendship of Alexander and Goldust is “curious”. But Goldust knows a star when he sees one! Alexander is on the cusp of a “Golden Opportunity!” “At the Royal Rumble, it will be time to roll film” on Alexander when he defeats Enzo Amore and becomes the new Cruiserweight Champion! What does Alexander think? Alexander says Goldust is 100% correct. This is the opportunity of a lifetime, and Alexander thanks Goldust for being a great mentor and even better friend. Goldust thanks him back, and says Alexander is the DiCaprio to his Scorsese. Alexander riles Goldust up! But to kill the mood, it’s Enzo Amore and the ‘Zo Train. 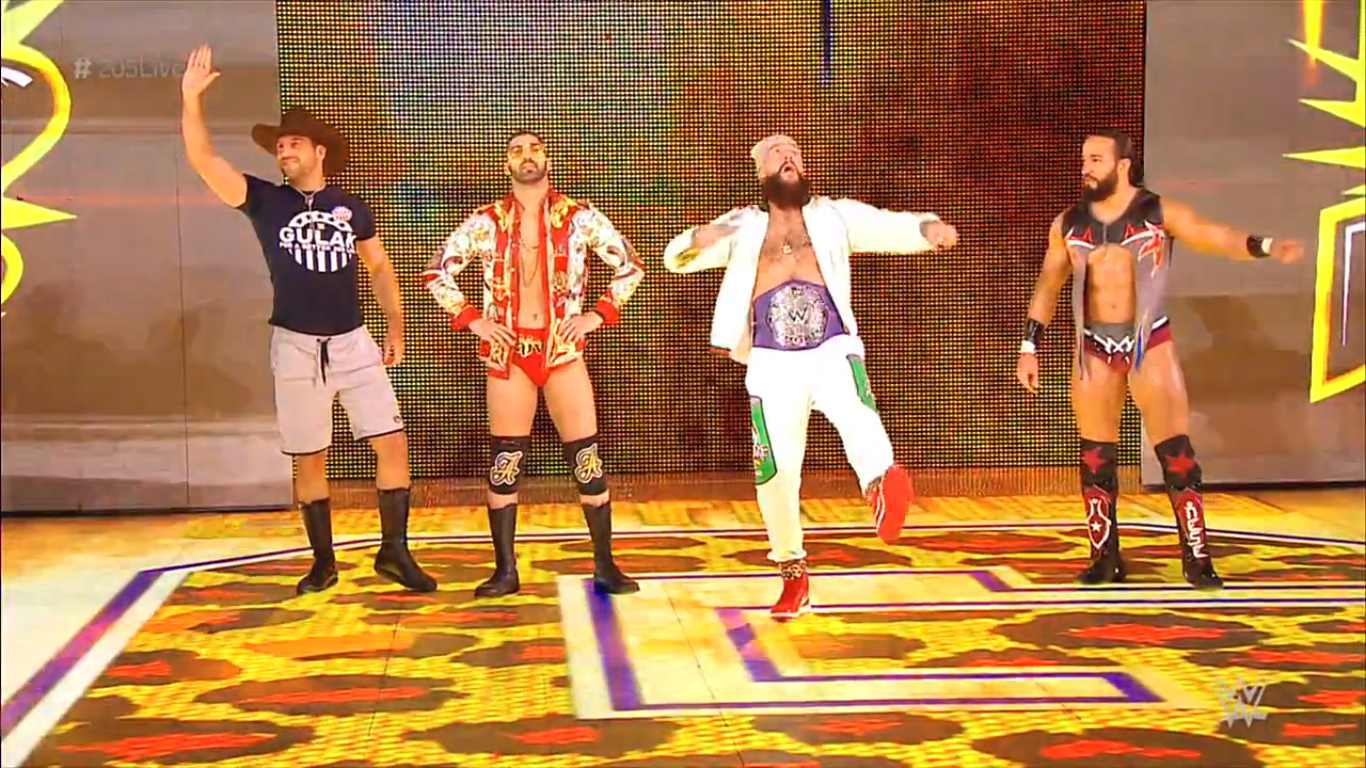 The Certified G thinks Goldy is crazy to think he is Scorsese. Though, just look at Goldust, that’s obvious. Enzo says if you want to see some Good Fellas, look no further than his ‘Zo Train. Goldust deserves an award, though, for “acting” like Alexander’s friend. The act won’t change the fact that Enzo is a bigger star than Goldy’s ever been, or Alexander will ever be! Alexander won’t have to worry, though, Enzo will make him famous for losing. The ‘Zo Show doesn’t need a comedy act, so Alexander and his funny friend– Funny? Funny how? 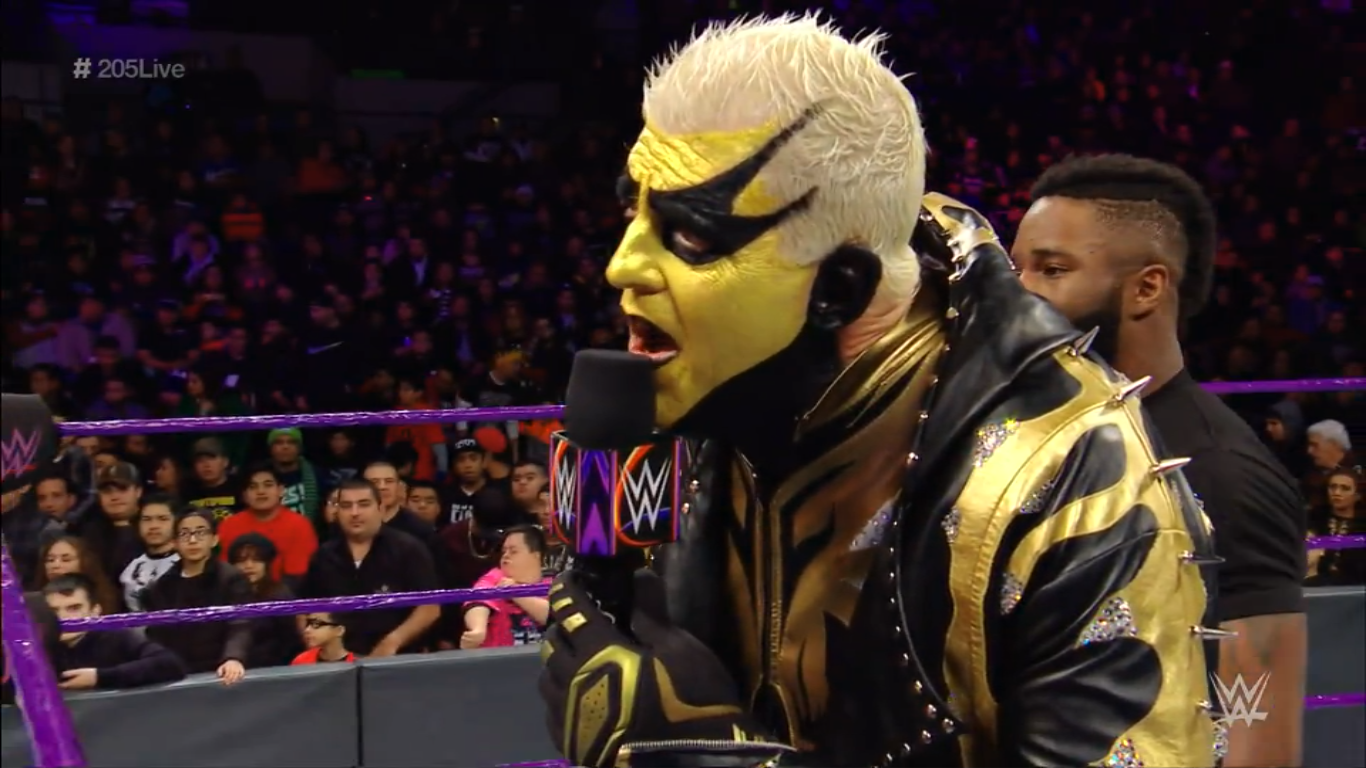 “Funny like a clown? Like I amuse you?” Well, Enzo did mention Good Fellas. And the only clown here tonight is the one in white “looking like a swamp duck.” Enzo points out that Goldust isn’t even under 205 lbs, so “shut your mouth!” What? Enzo wants Goldust to shut up? Then Enzo should come and make him! Goldust wants to step toe to toe with ‘Zo? Enzo heads right down, bad ankle and all, but the ‘Zo Train follows. Enzo reconsiders, and says that if they want to touch the “best of all time”, get through auditions. They need to get through all three members of the ‘Zo Train to touch Muscles Marinara. Do they want a match? Alexander wants Goldust to reconsider, but Goldust accepts! In that case, Enzo calls for a ref! 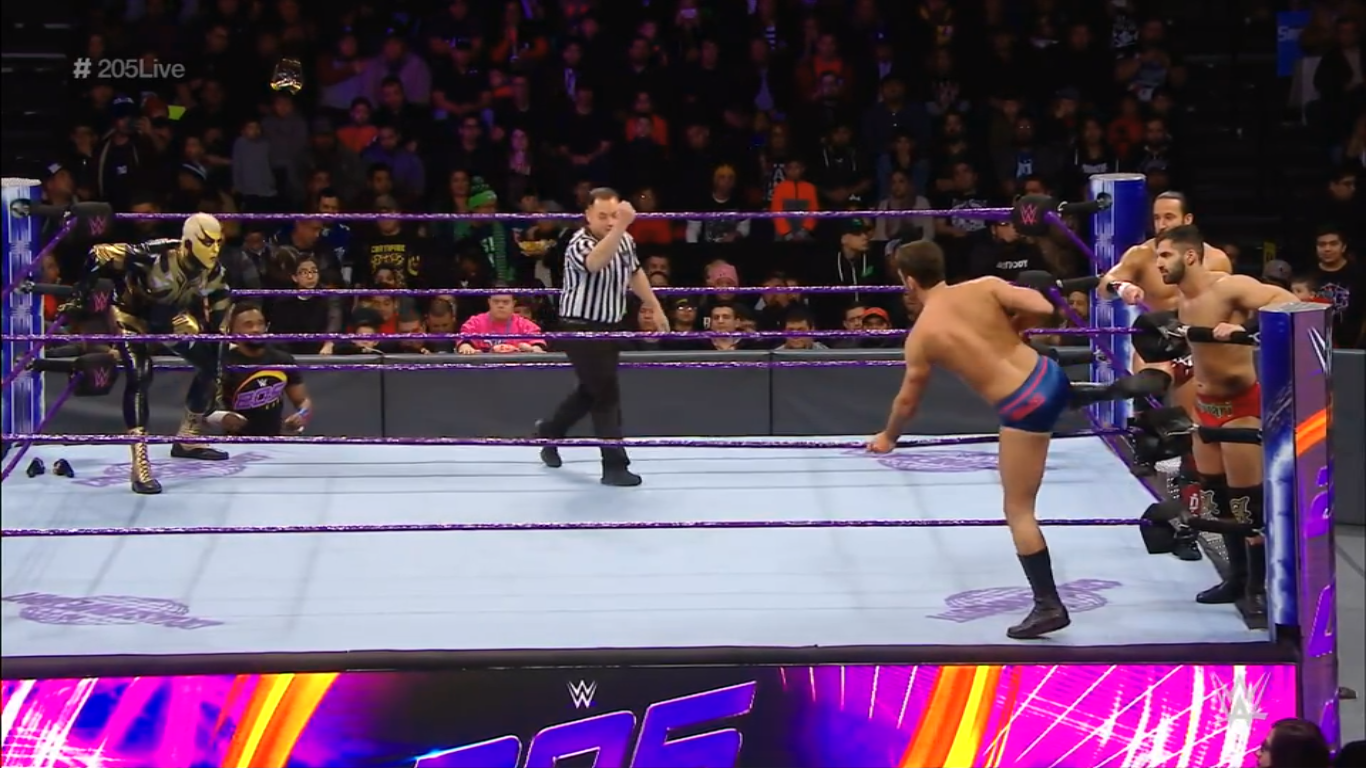 The Bizarre One may not be part of the Cruiserweight Division, but he’s about to make his 205 Live in-ring debut!

“Gabba Gulak” starts for The ‘Zo Train, he and Goldust circle, but then Goldust takes a deep breath and breathes on Gulak. Gulak slaps Goldust! Goldust puts on a headlock, Gulak powers out, Goldust runs Gulak over with a shoulder. He keeps moving, too, and catches Gulak to keep him moving, for the hip attack! 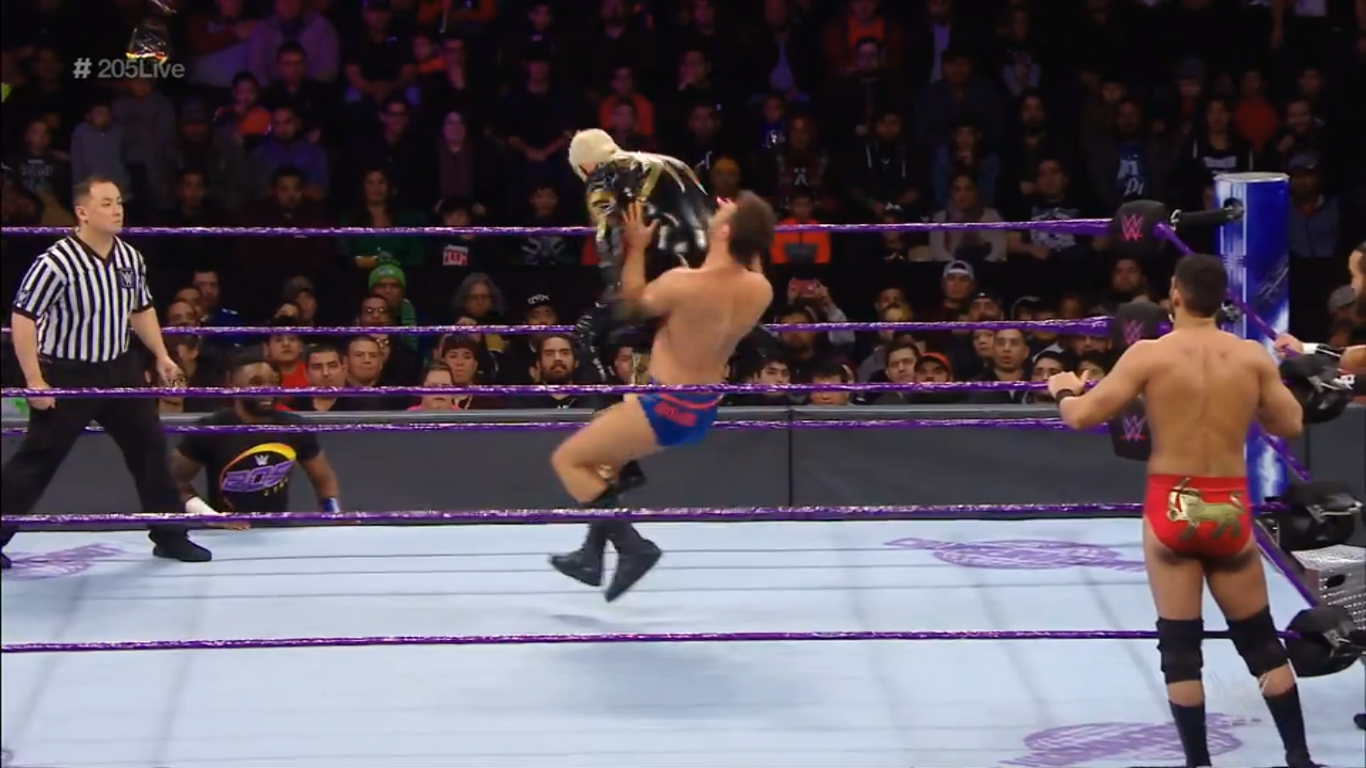 Gulak scrambles to the ‘Zo Train’s corner and tags in “Daivari Dinero.” Goldust is ready, as he arm-drags and atomic drops the Privileged Persian. Daivari walks it off, but then gets another atomic drop that sends him to the corner. Goldust climbs up and starts corner punches on Daivari, but has to stop part-way to clobber Gulak with a flying haymaker. Goldust scares Nese off, too, but that allows Daivari to clobber him from behind! Daivari stomps a mudhole, tags Nese, the Premier Athlete stompts a mudhole, then tags Gulak so he can springboard stomp a mudhole. Enzo likes what he sees as his ‘Zo Train mugs Goldust. Daivari stomps away, trash talks, then Nese tags in. Alexander rallies fans, Nese and Daivari argue, Goldust rolls Nese up! TWO, and Nese runs Goldust over with a back elbow! 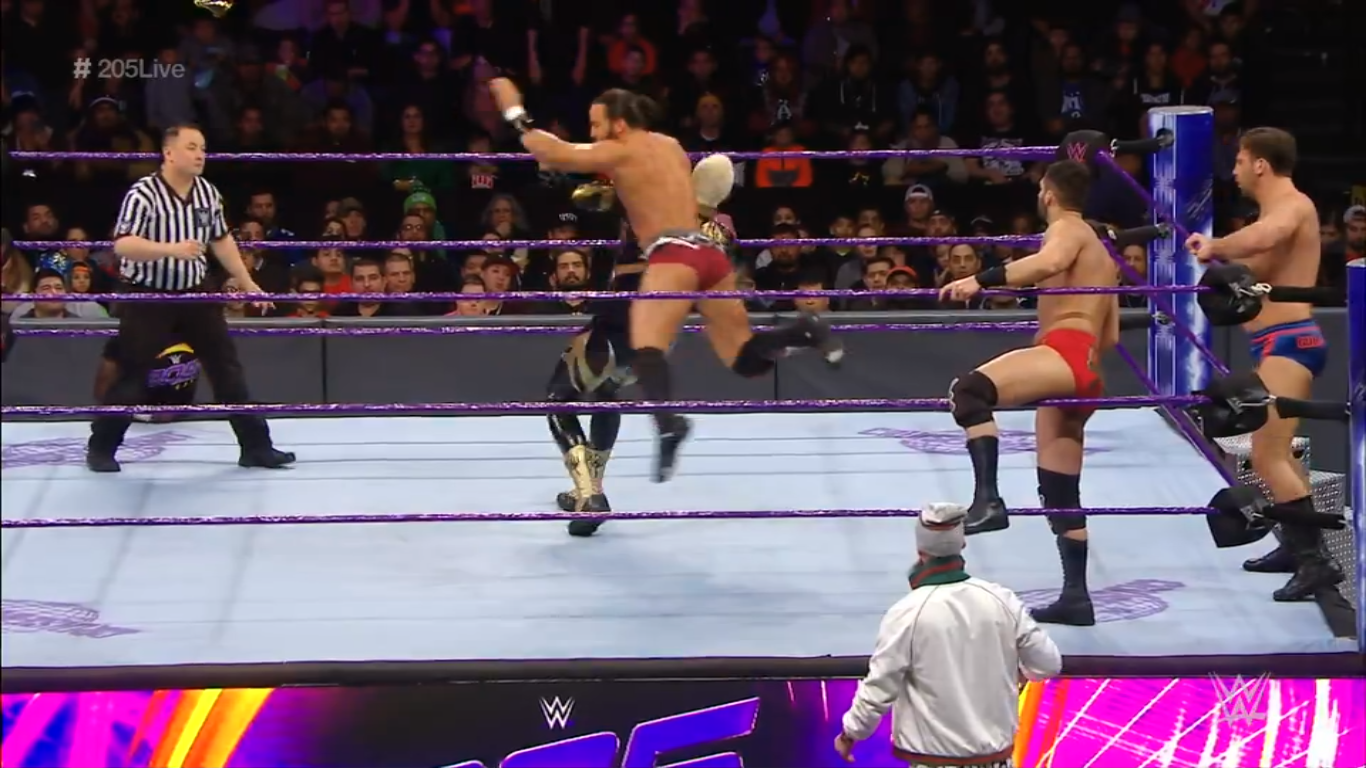 Cover, TWO, Nese keeps on Goldust with a neck wrench. Daivari still argues, Enzo shouts him down while fans rally for Goldust again. Goldust gets up, Nese whips him to an open corner hard. Nese runs in but Goldust evades and Nese hits buckles, then takes a spinebuster from Goldust! Goldust can’t tag out, Nese gets the tag to Gulak. Goldust keeps moving, giving lariat after lariat. Gulak reverses the whip, but Goldust stops to give him the uppercut. Goldust gives Nese an uppercut, then gets moving again to hit a bulldog. The fans fire up with the Ageless Wonder, he whips Gulak corner to corner and then hits the spinning powerslam! 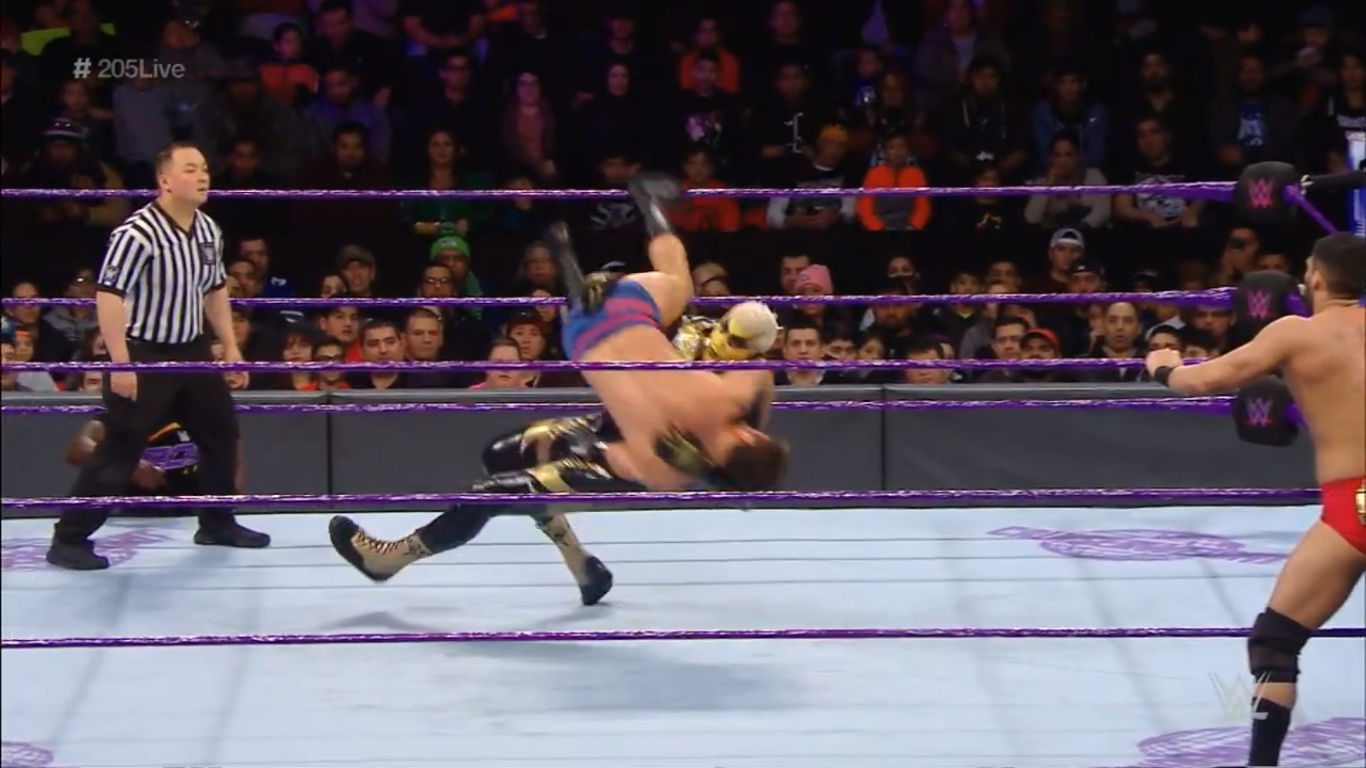 Cover, Daivari breaks it. Daivari goes to throw Goldust out but Goldust throws him out instead. Gulak distracts the referee so that Nese can come in and use a knee to drive Goldust out of the ring. Nese builds speed and FLIES! 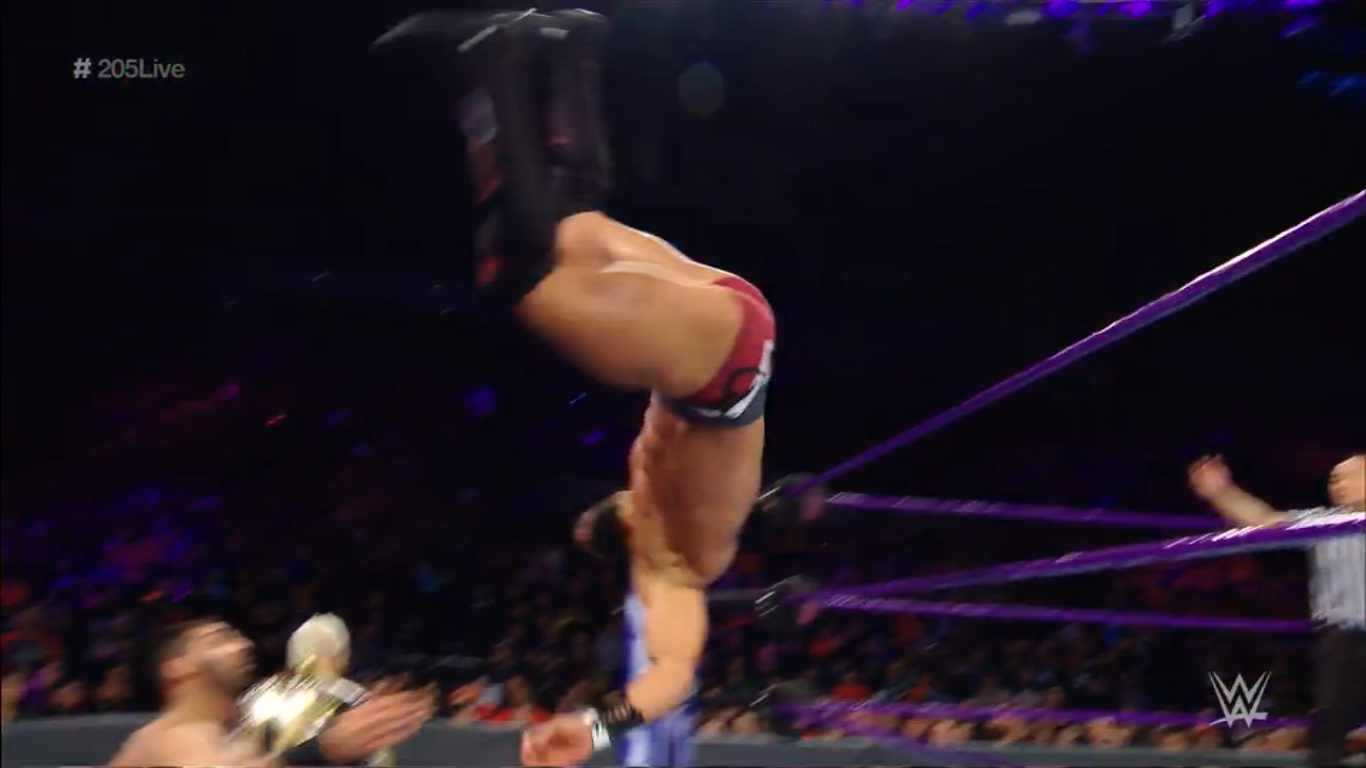 But Goldust got out of the way, only Daivari gets wiped out! Enzo is furious with his team! How can one man do this to the three of them? However, Enzo has to watch himself, because Alexander DIVES onto him! 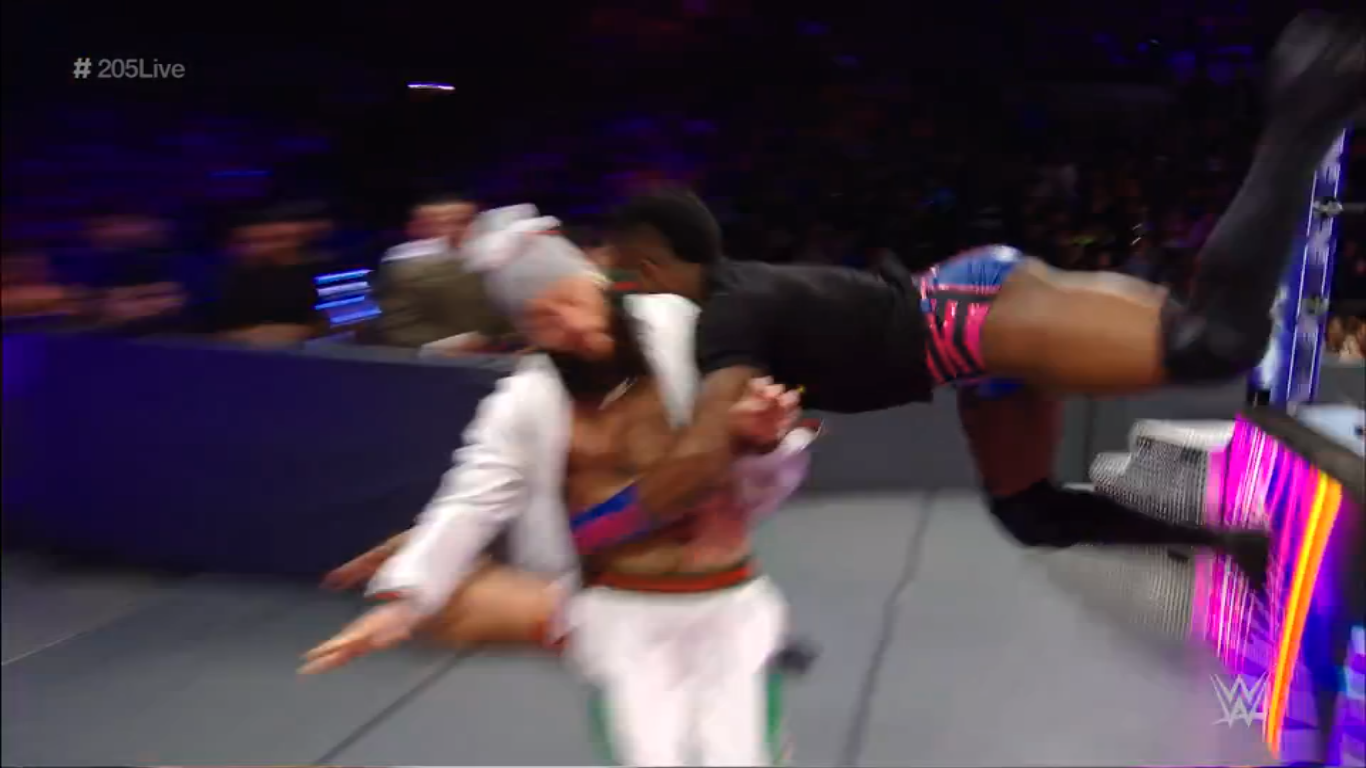 Alexander topples the Cruiserweight Champion over, which infuriates Gulak. However, Goldust creeps up behind Gulak. Gulak turns around, and gets caught in the Final Cut! 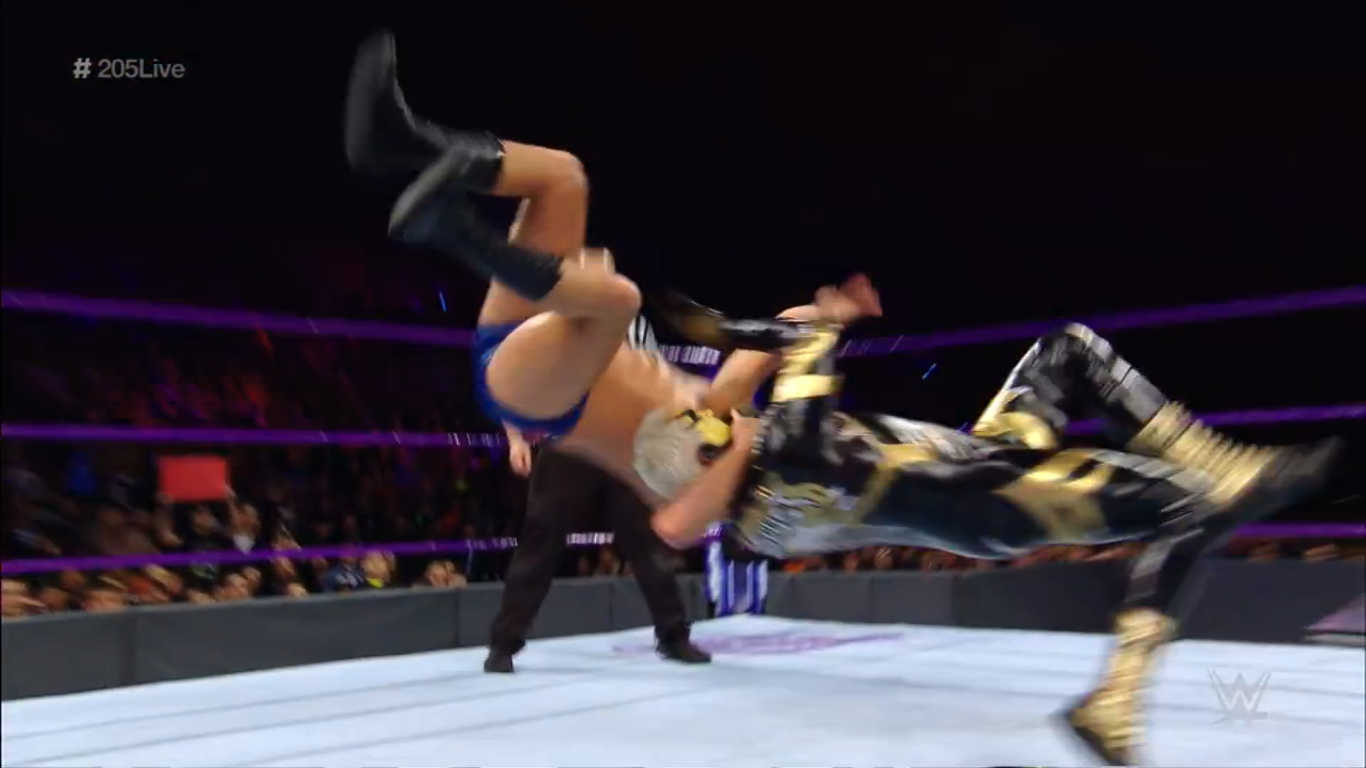 Goldust wins! Alexander comes in to celebrate with him, and they’re all smiles. 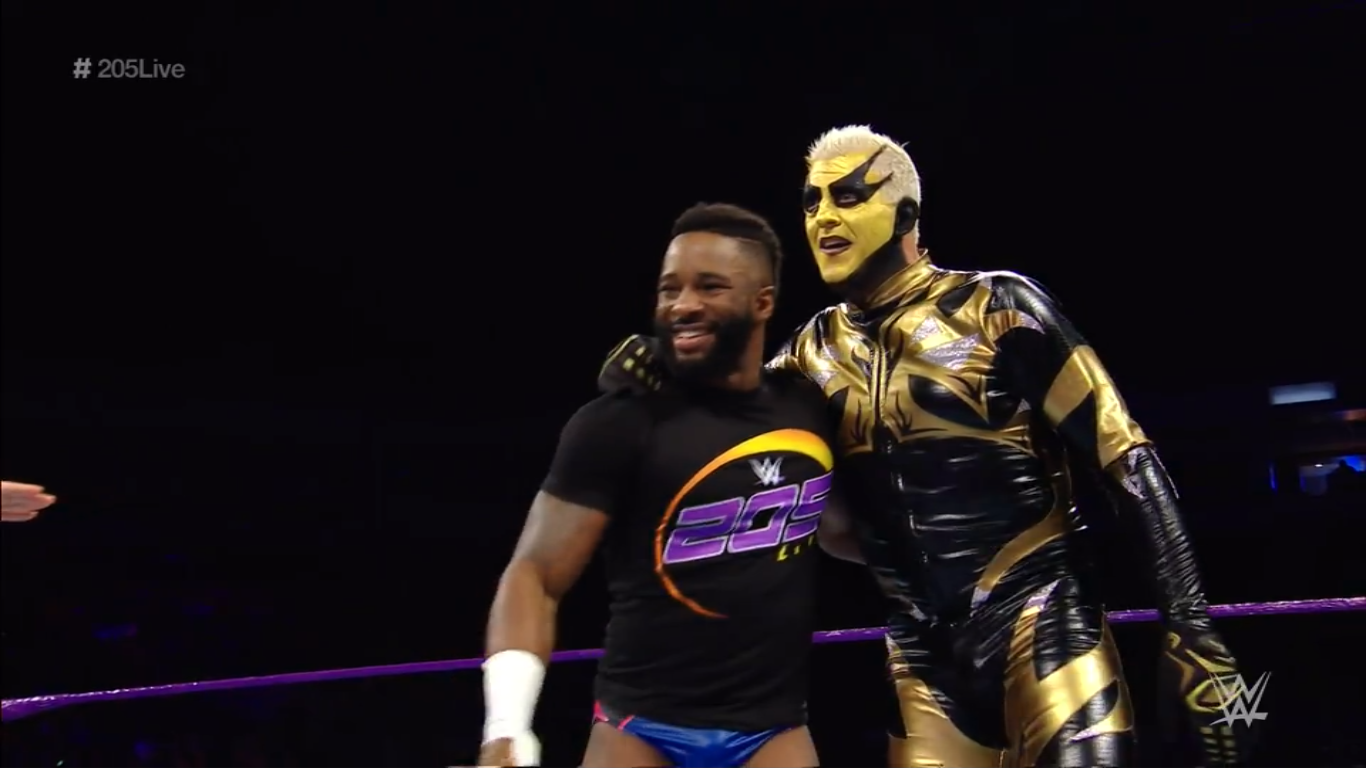 As for the ‘Zo Train, they’re all at each other’s throats over who is to blame. Enzo is beside himself but each member of the Train blames the other. Will Alexander derail the ‘Zo Train once and for all when he capitalizes on the #GoldenOpportunity? 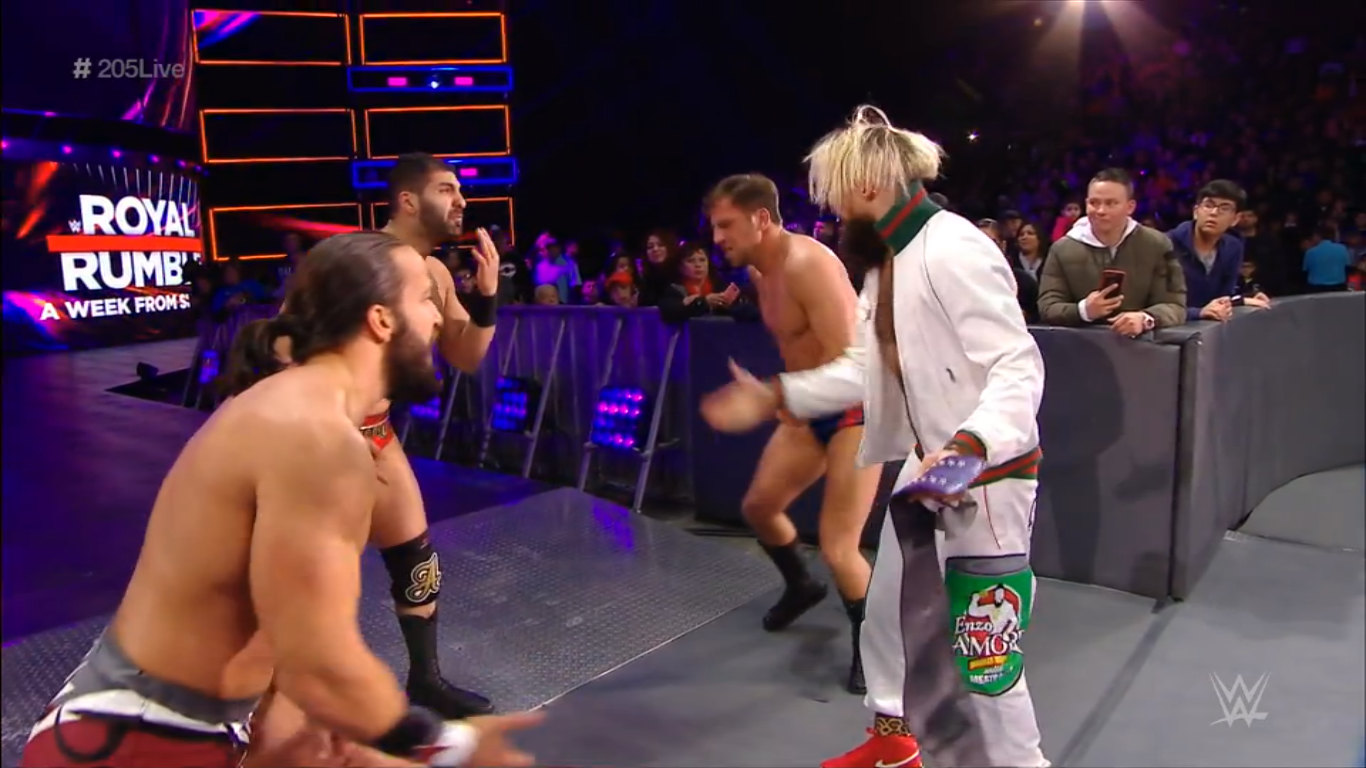 I was surprised to see 205 Live cut in half to accommodate the Mixed Match Challenge that goes on at 10PM EST. Shorter format aside, there was still some good stuff tonight. I did not expect TJP to go 0-2 with Gran Metalik like this so soon, and I also didn’t expect him to keep his cool for that long. It is great that TJP’s sore loser story is continuing even now that he’s back, and it can continue to evolve and take some interesting turns while he waits for the Cruiserweight Championship to be freed up from Enzo and Alexander. Gallagher makes some headway in being a Heel with his promo tonight, hopefully he matches his wrestling style to be more Heelish and cruel. Gallagher VS Itami in a No Disqualification match is the bare-minimum for their blow-off, and I hope WWE lets them take it to the maximum.

The main event segment is the only mixed bag of the night. While Goldust can still go in the ring and is hilarious on the mic, and while fans still love and appreciate him, him winning against the ‘Zo Train can be both a positive and a negative. It is a positive because it gives the Heels their due comeuppance in the overall story of Alexander VS Amore. Enzo was so confident his three henchmen would win, and that was sent right back at him. However, the negative is that this crossover of Cruiserweight(s) VS Non-Cruiserweight(s) is happening on 205 Live, the “Exclusively Cruiserweight Show”. If this had happened on Raw, then it might have felt better, but something about it happening on 205 Live feels off, and I’m not sure why. I still lean towards the positive, this helps Alexander’s momentum going into the Royal Rumble’s Cruiserweight Championship match, and maybe WWE will green light a new champion for the Road to Wrestlemania.