All images courtesy of the WWE Network streaming service

NXT General Manager, William Regal, welcomes you to the first NXT of 2018. 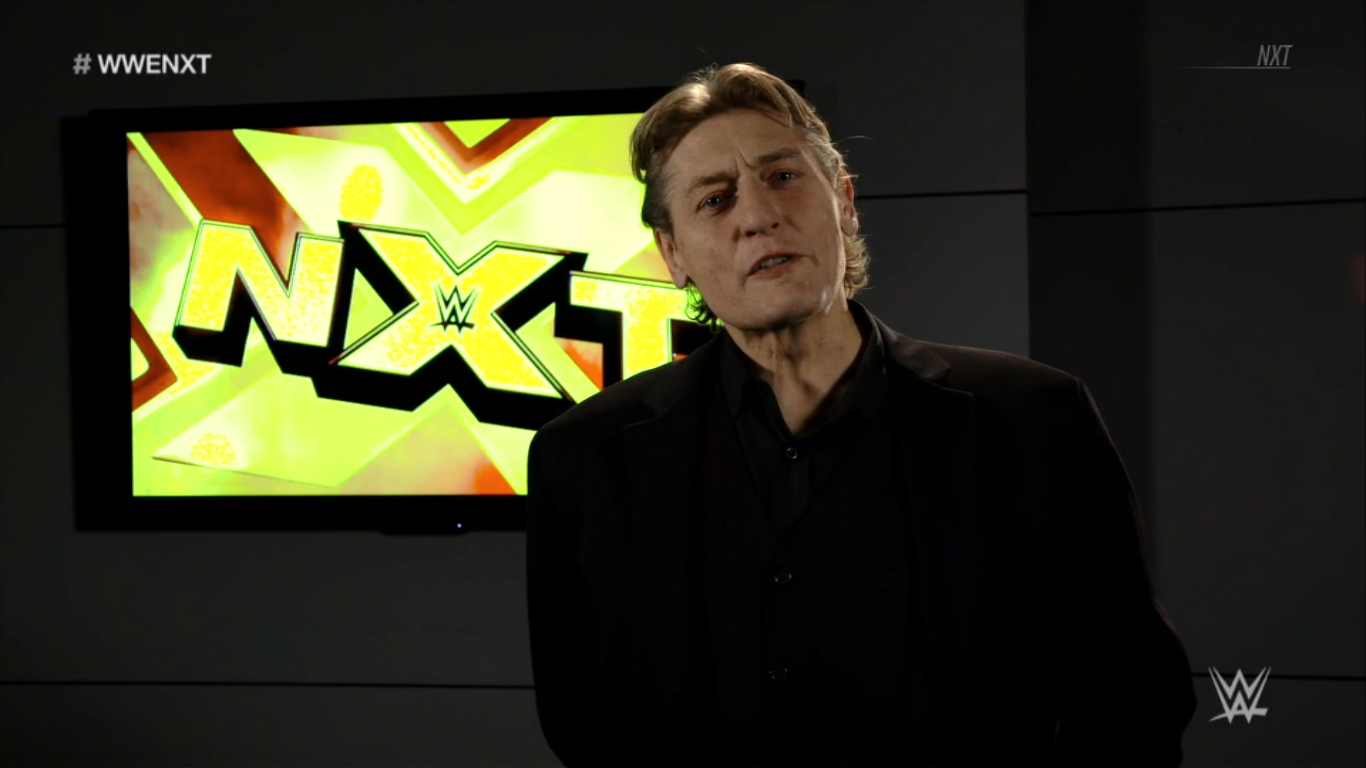 Tonight’s two hour episode will be a 2017 retrospective with “never-before-seen footage, exclusive matches, and all the superstars and moments” that made the year so memorable.

Shane Thorne & Nick Miller came in hard and fast in early 2017, but Thorne sustained an injury that sidelined the team. Now that he’s 100%, he and Miller are coming back with a vengeance. The Mighty Don’t Kneel, can they make everyone else in the Tag Team Division bow down before them? 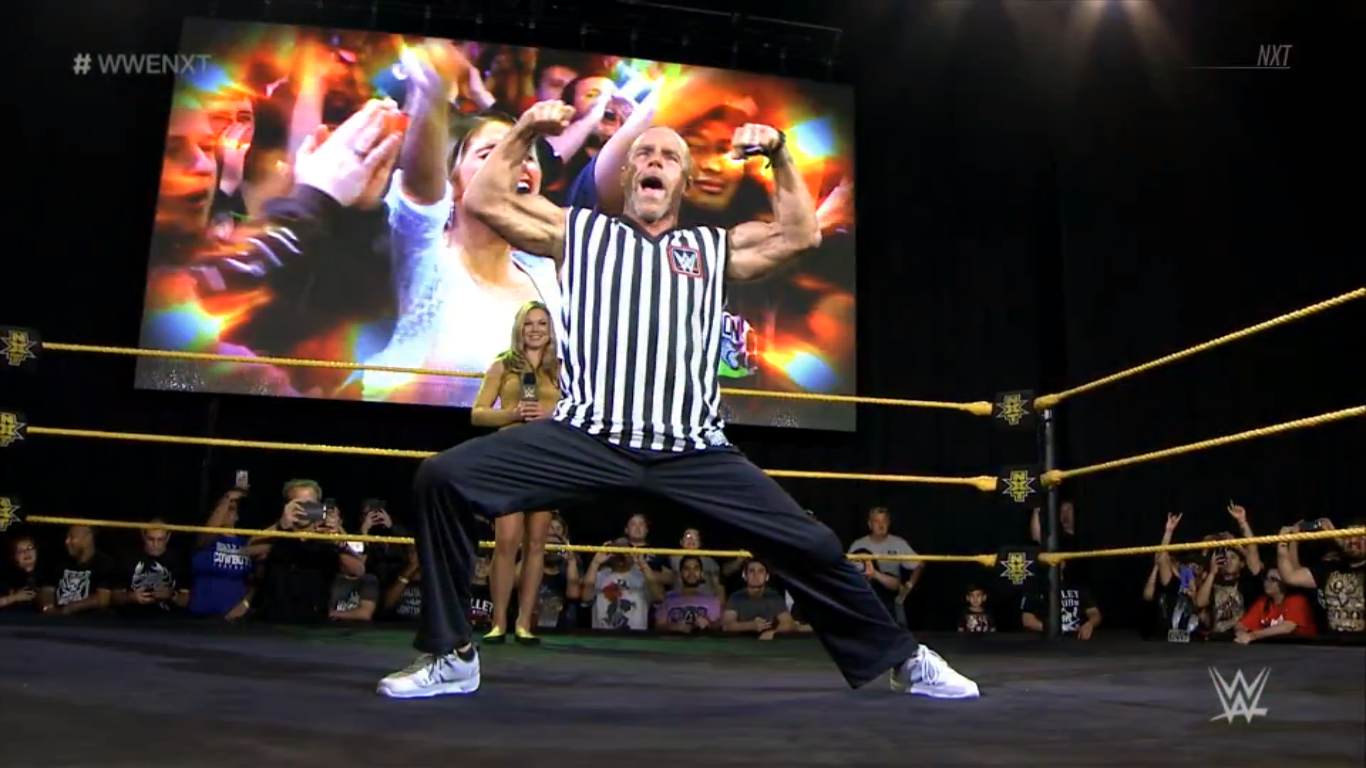 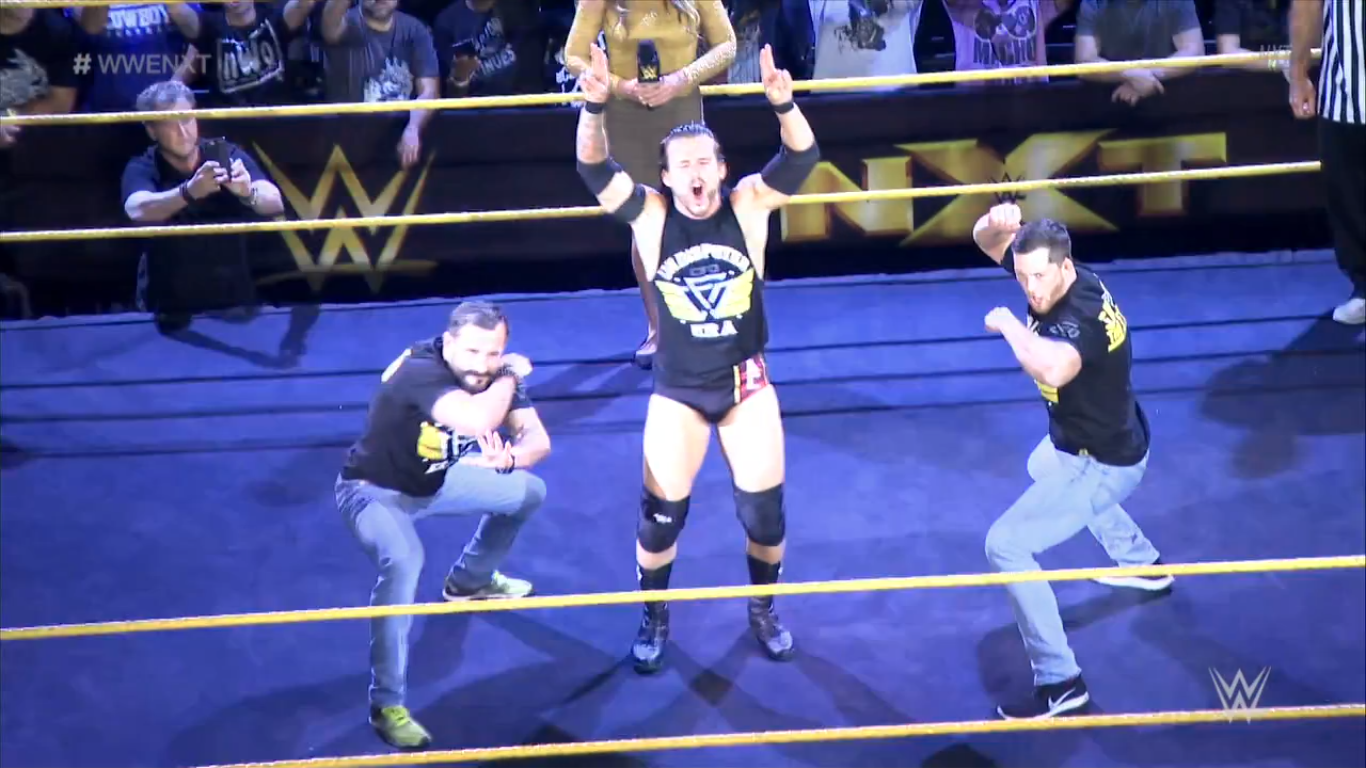 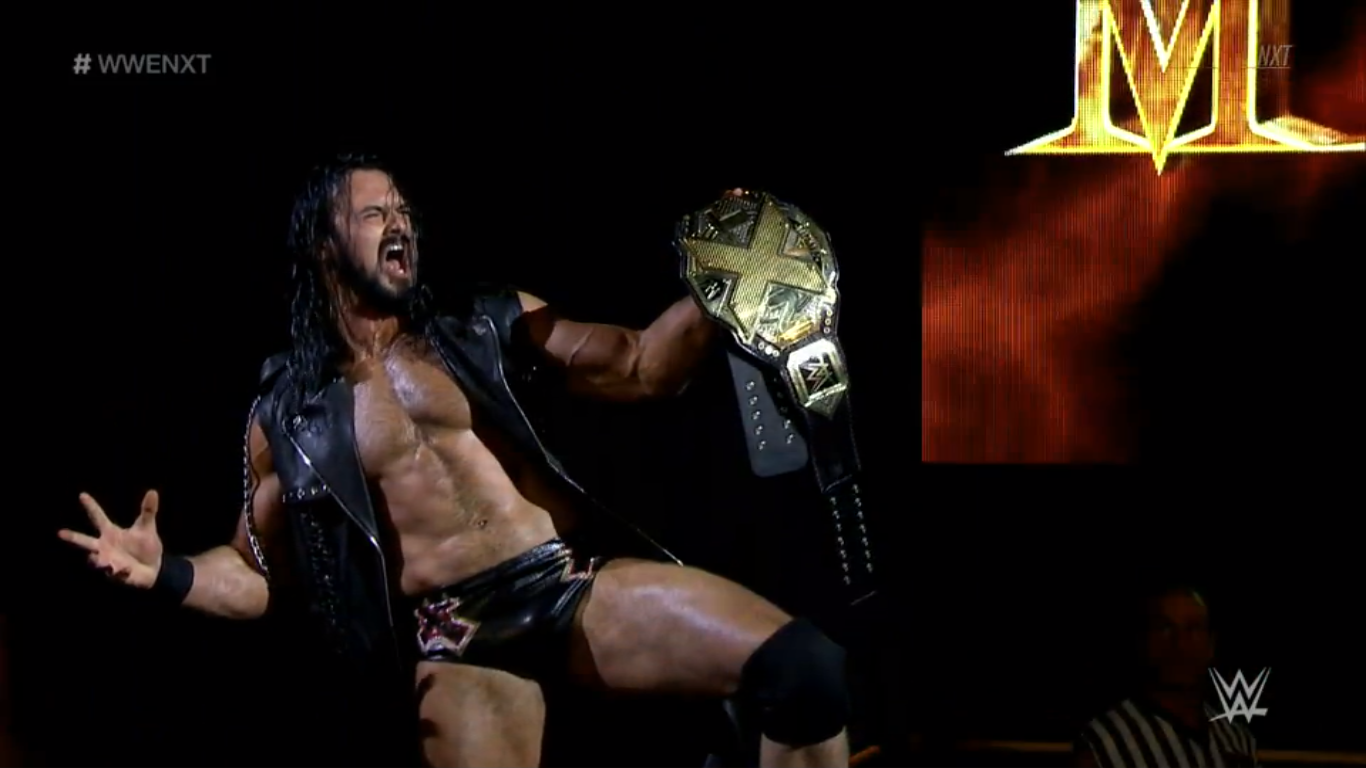 Just 24 hours before TakeOver: WarGames, The Heartbreak Kid returned to a WWE ring in his hometown of San Antonio to officiate this amazing match between the Celtic Colossus and the leader of the Undisputed Era!

The two circle, Cole gets the waistlock but McIntyre the standing switch and slam. McIntyre dares Cole to come back for more. The Undisputed Era reassures their leader that they “expected this”, so Cole gets up and puts on a headlock. McIntyre uses his superior height and strength to power Cole back and power out of the hold to then run Cole over. Cole slips out of the ring, frustrated by McIntyre. Kyle O’Reilly and Bobby Fish fan him off while he walks it off. HBK counts while Undisputed Era talks strategy. Cole slips back into the ring at 7, McIntyre tauntingly gives him a free shot. Cole goes for it, McIntyre blocks, but then Cole bobs ‘n’ weaves to give right hands. Jawbreaker rocks McIntyre, O’Reilly hooks a foot while Cole distracts. HBK finally takes note of it and backs reDRagon off of the champ, and fans anticipate an ejection. reDRagon protests, Cole reasons with him, but after milking the moment, HBK ejects Fish & O’Reilly! 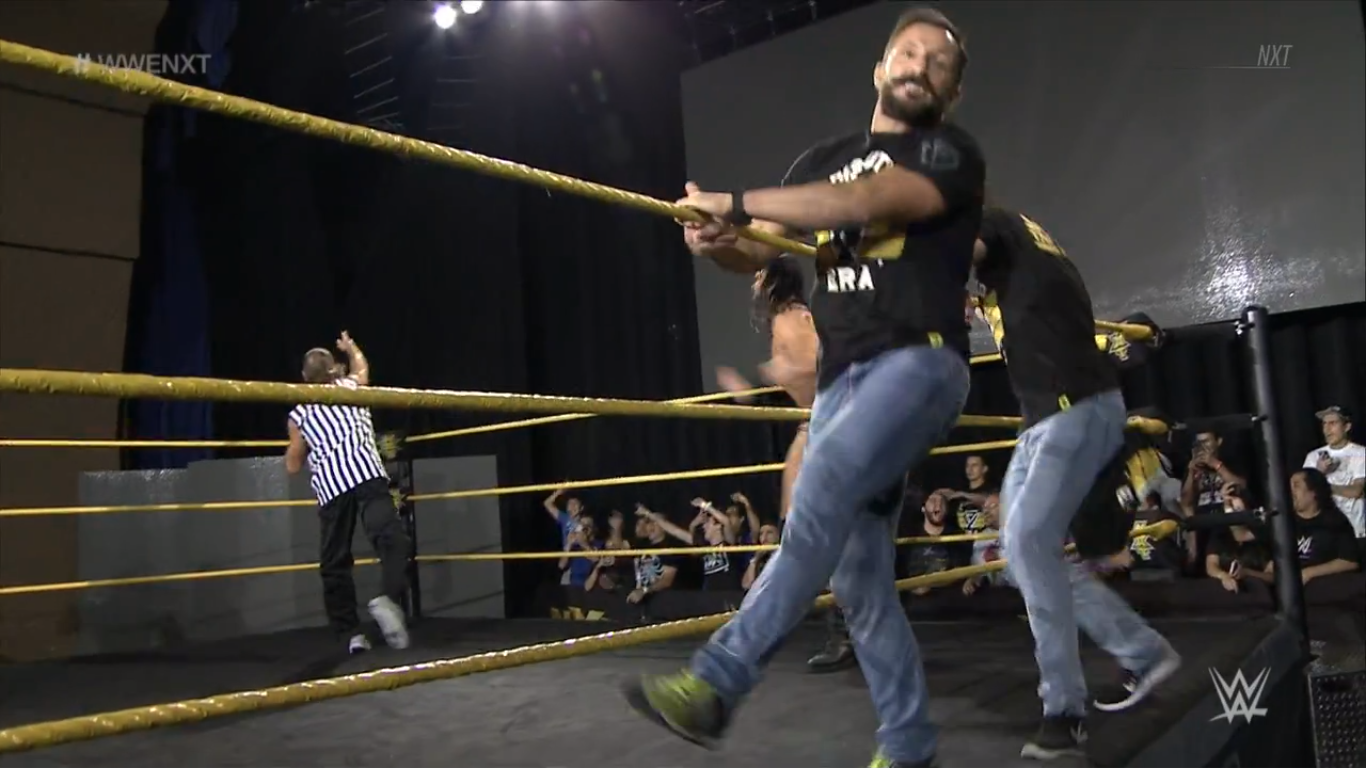 The referee has made the decision, the Undisputed Era has no choice but to go with it. Fish & O’Reilly are furious the entire way, McIntyre tells them to “SUCK IT!” Cole argues with HBK but the fans sing “Nana nana~, hey hey hey~, good bye~!” Cole continues to argue with HBK while fans cheer HBK. McIntyre patiently waits with a smirk on his face while Cole is busy arguing with the ref. HBK tells Cole he should worry more about his opponent than the referee. Cole turns around, and McIntyre clobbers him with a clothesline! McIntyre chops Cole then whips him corner to corner for a BIG back body drop! 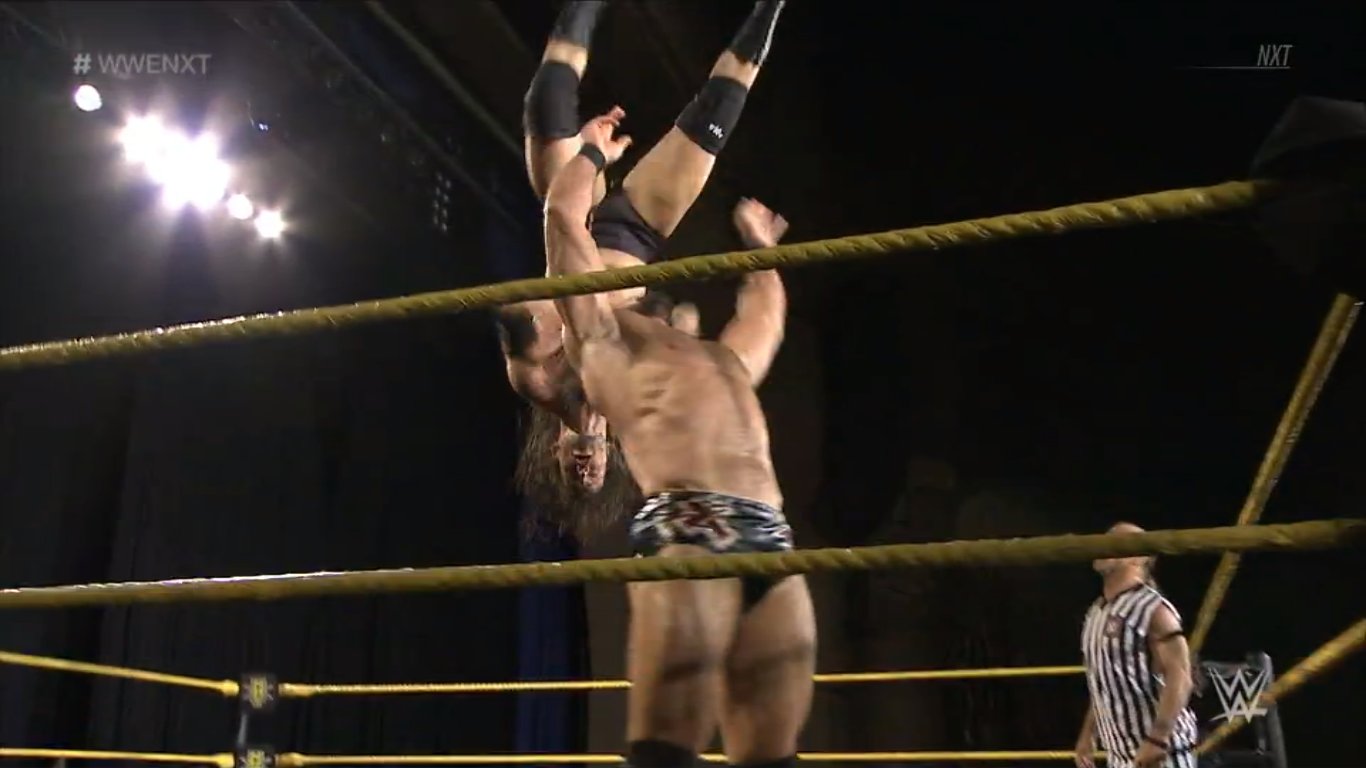 McIntyre deadlifts Cole up, and into a suplex. Cole rolls to ropes and uses them to climb to his feet. He shoves McIntyre away and says “You SUCK, Drew!” McIntyre fires off furious right hands! HBK tries to back McIntyre off but McIntyre will not be interfered with. HBK doesn’t take that lightly, he pries McIntyre off and now they argue. Cole pounces with a chop block! He then rains hands on McIntyre, brings the champ up but McIntyre chops back. McIntyre hobbles before running in, Cole dodges and McIntyre runs into a post! The champ tumbles out, HBK checks on him, we go to break.

NXT returns, Cole still has control of McIntyre as he stands him up. McIntyre reverses the suplex, Cole escapes teh Future Shock DDT, McIntyre dodges the enziguri. McIntyre then deadlifts Cole for a sit-out powerbomb! 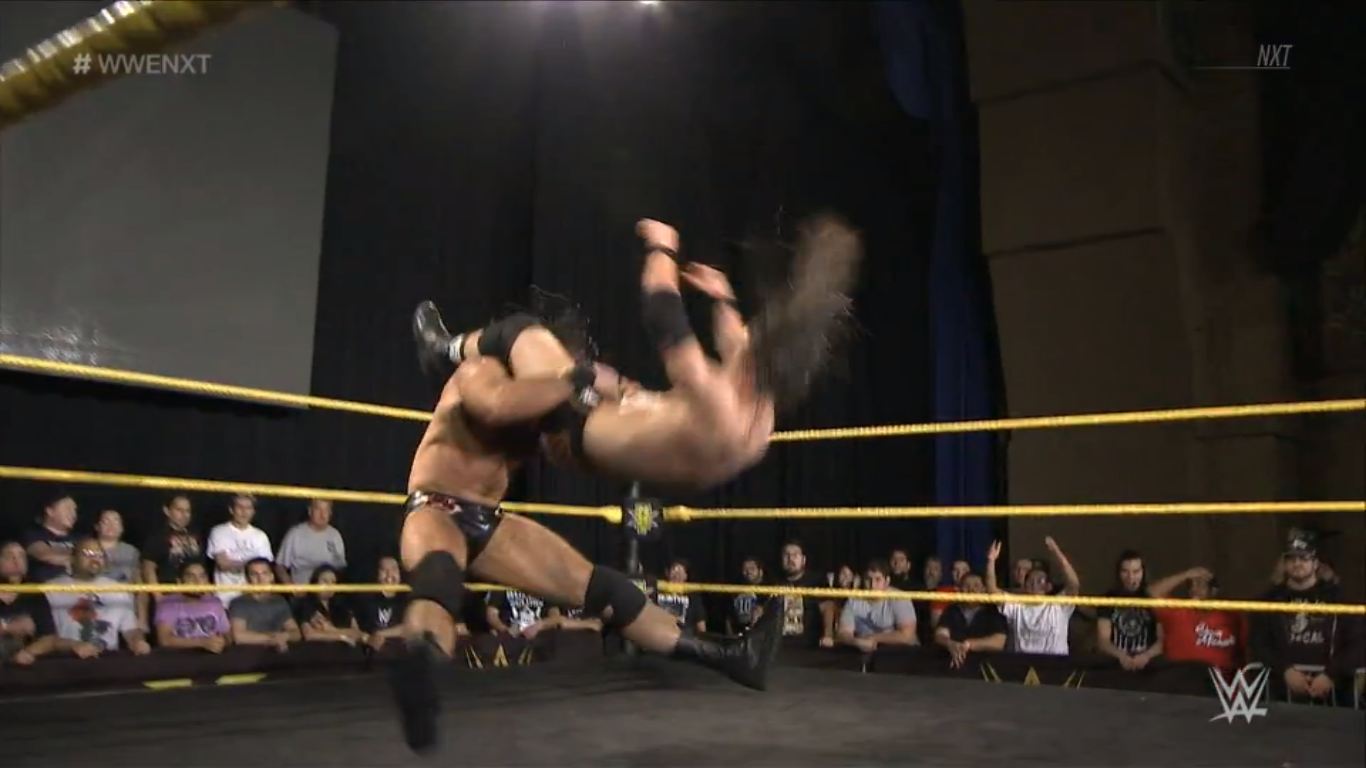 TWO! McIntyre is shocked Cole survived. HBK backs off to watch both men while the fans declare “This is Awesome!” McIntyre drags Cole up by his chin, Cole SPITS on McIntyre, so McIntyre headbutts Cole right down. He drags Cole up again, fireman’s carry and then he climbs up the top rope. HBK is worried as McIntyre positions Cole, then hits the SUPER Celtic Cross! 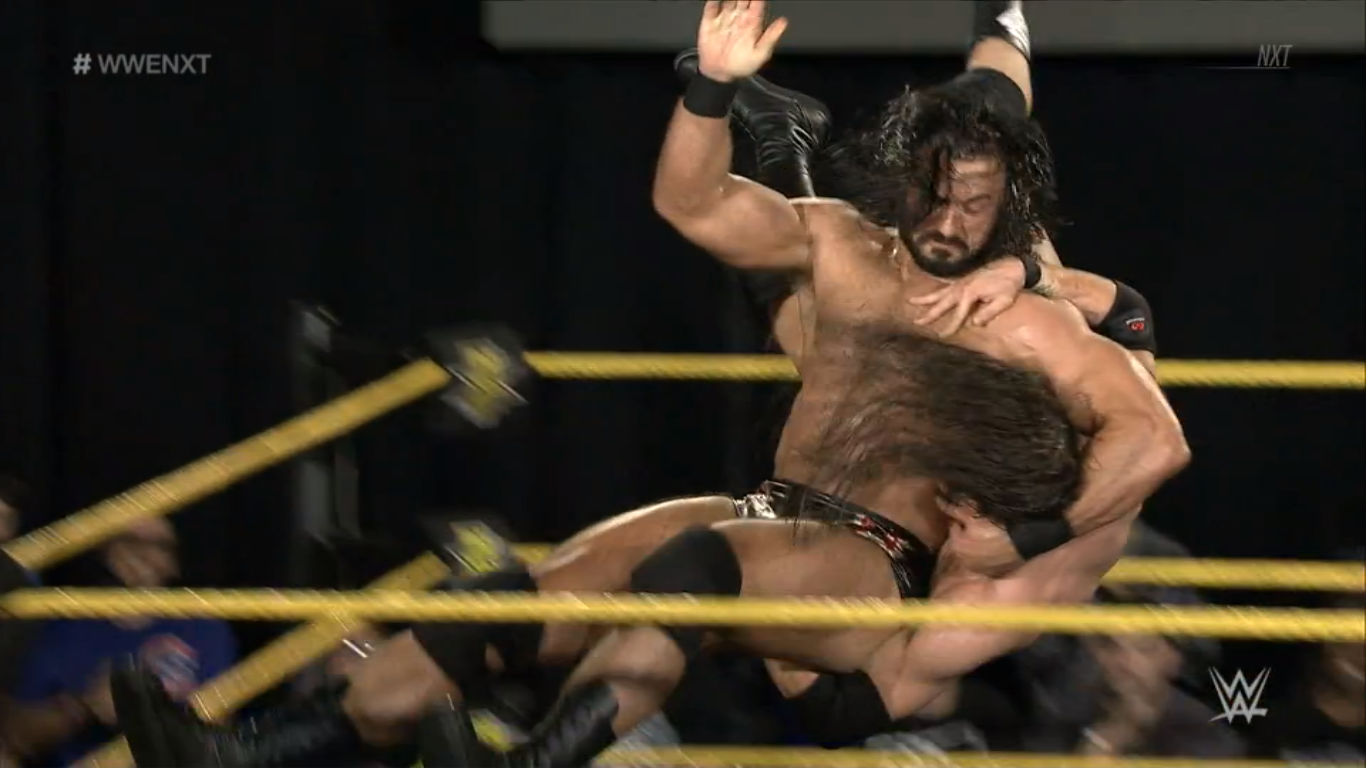 The landing is so strong, McIntyre can’t make the cover right away. He crawls over, Cole gets a foot on the ropes! HBK points it out, McIntyre can’t believe it. Fans chant for “NXT! NXT!” as the champion uses ropes to help himself stand up. Cole does the same but McIntyre drags him over by the hair. Cole kicks out McIntyre’s leg, then hits the Shining Wizard! 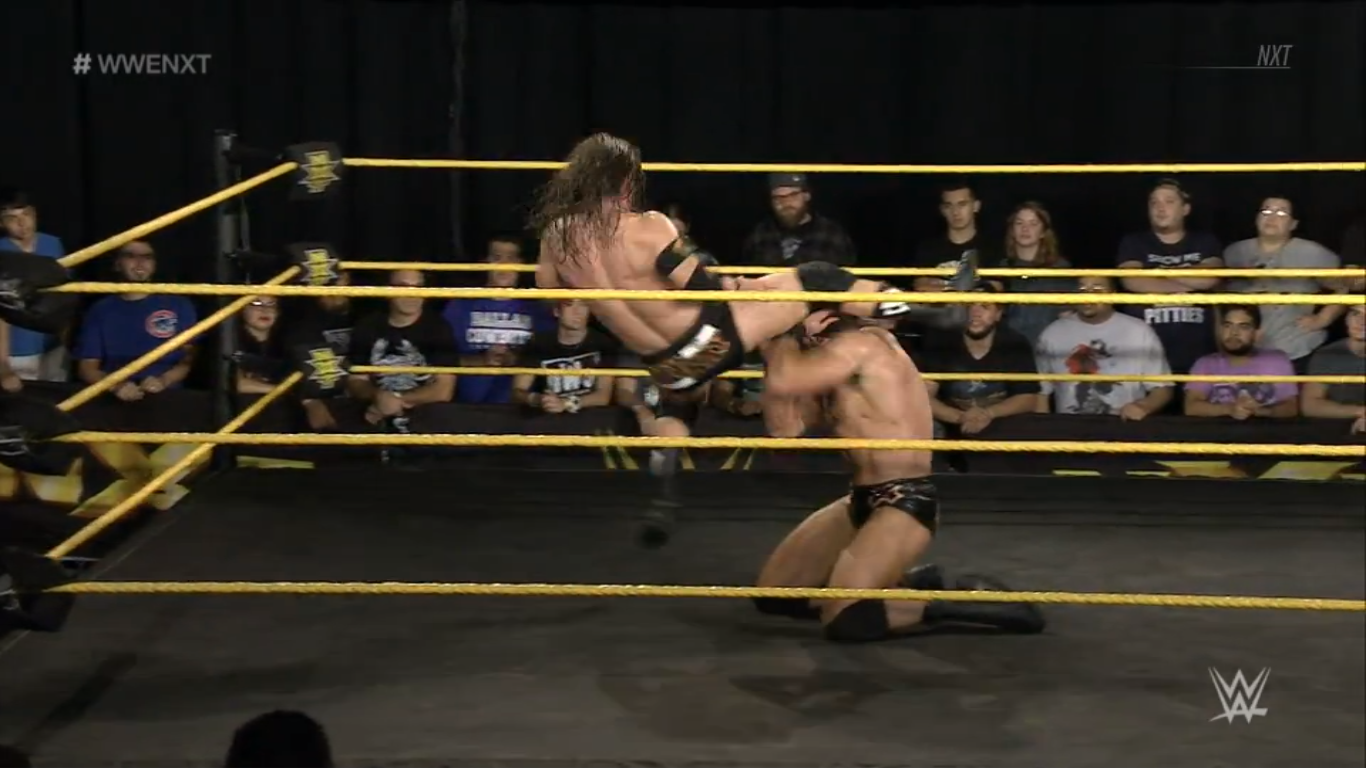 He’s not done there, he hits a second Shining Wizard! Cover, TWO! Cole’s frustration boils over, and even HBK looks a bit surprised. Fans rally as Cole glares at HBK. They argue again, Cole accusing HBK isn’t doing his job. Fans warn Cole of the “Sweet Chin Music!” so Cole backs off with a grin. Speaking of Sweet Chin Music, Cole “tunes up the band!” McIntyre staggers to his feet, but he blocks the Superkick! He spins Cole around, Future Shock! 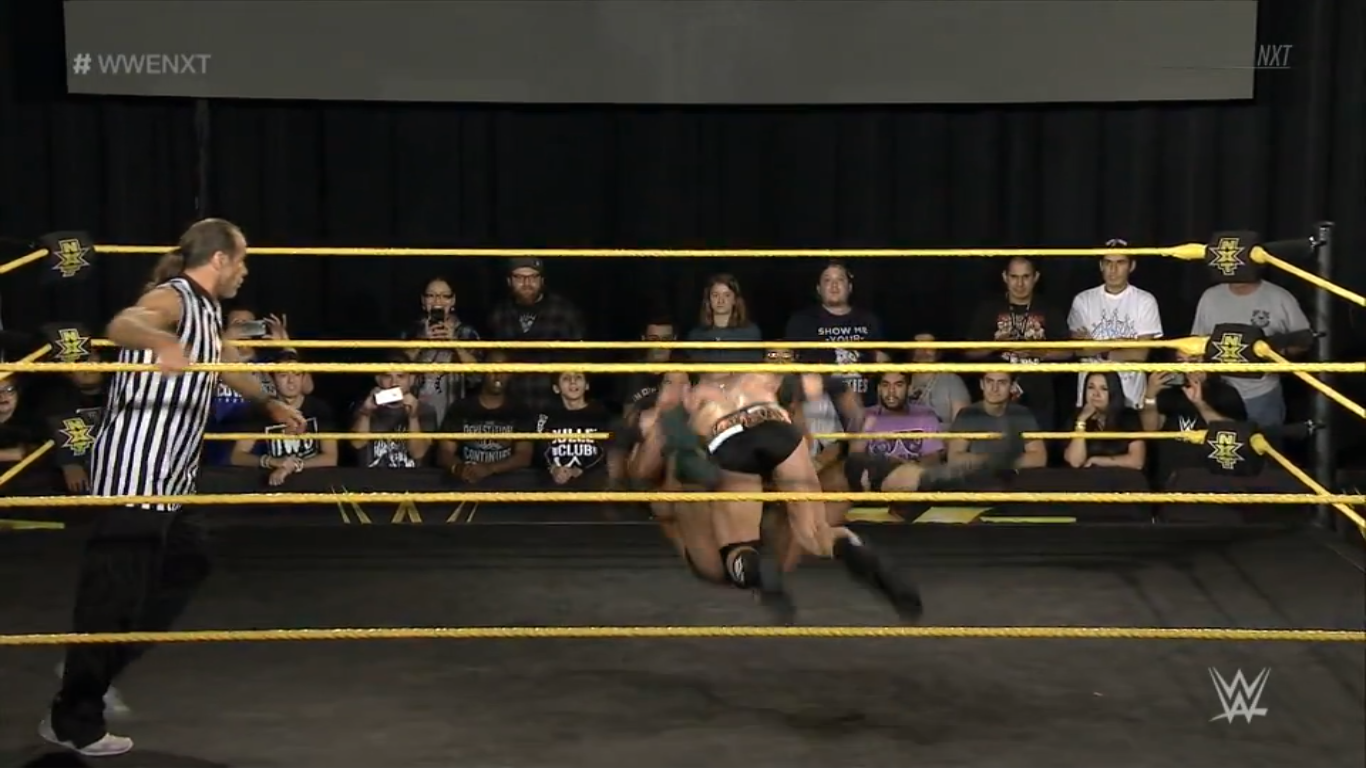 TWO! McIntyre cannot believe this! Even HBK is exhausted from this match. McIntyre and Cole get up, Cole thrusts but McIntyre dodges, the SUPERKICK hits HBK!! 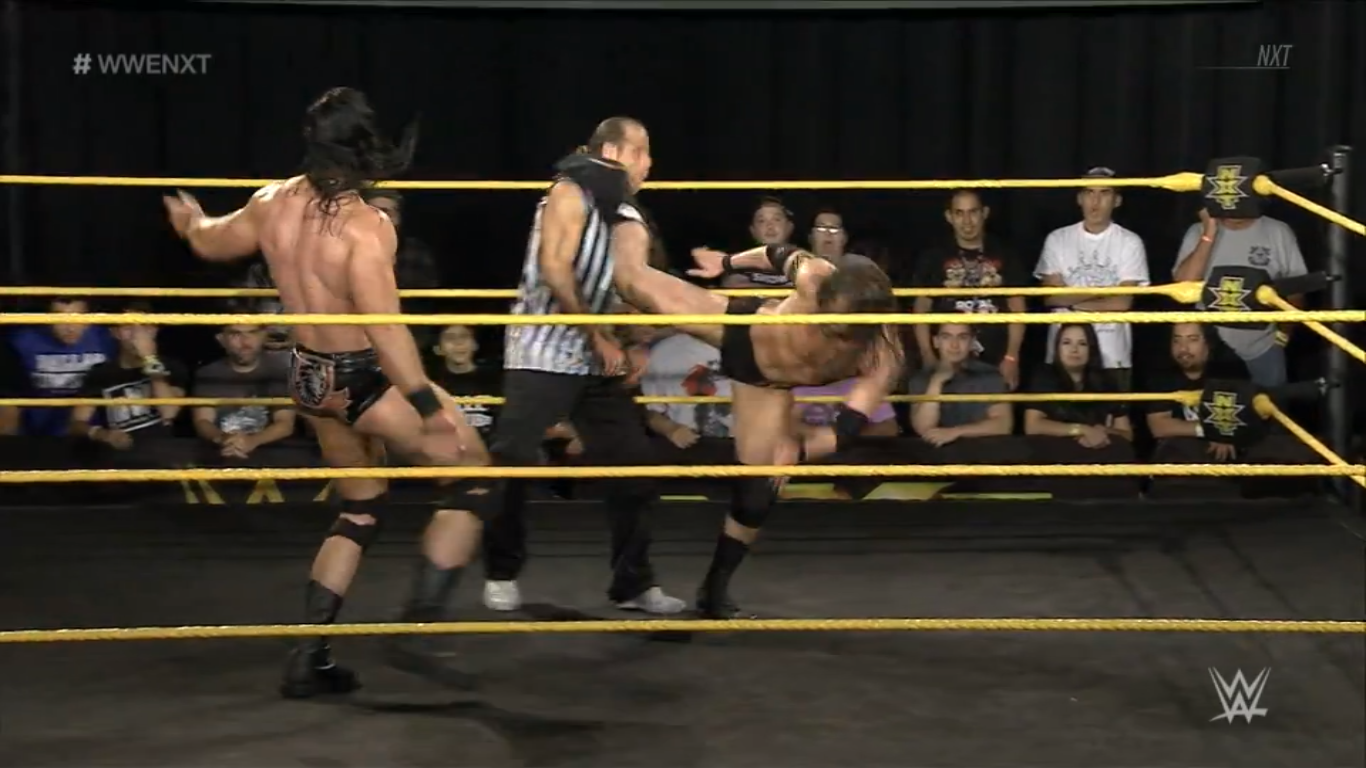 Everyone is shocked, and many boo Cole. McIntyre hits him with the Claymore Kick! 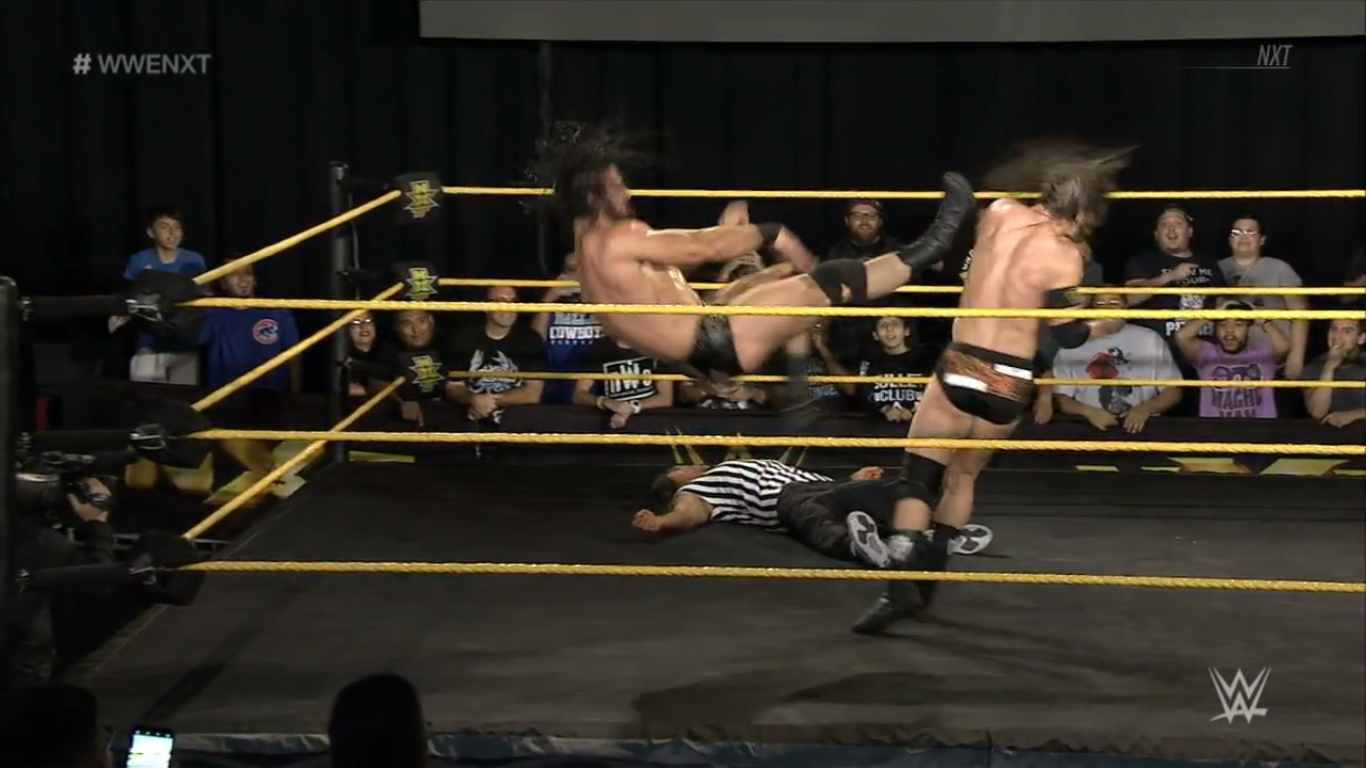 But the referee is out cold! There’s no one to count! HBK stirs but it’s been well over 10 counts. And when he finally does start counting, reDRagon returns to drag him out of the ring! 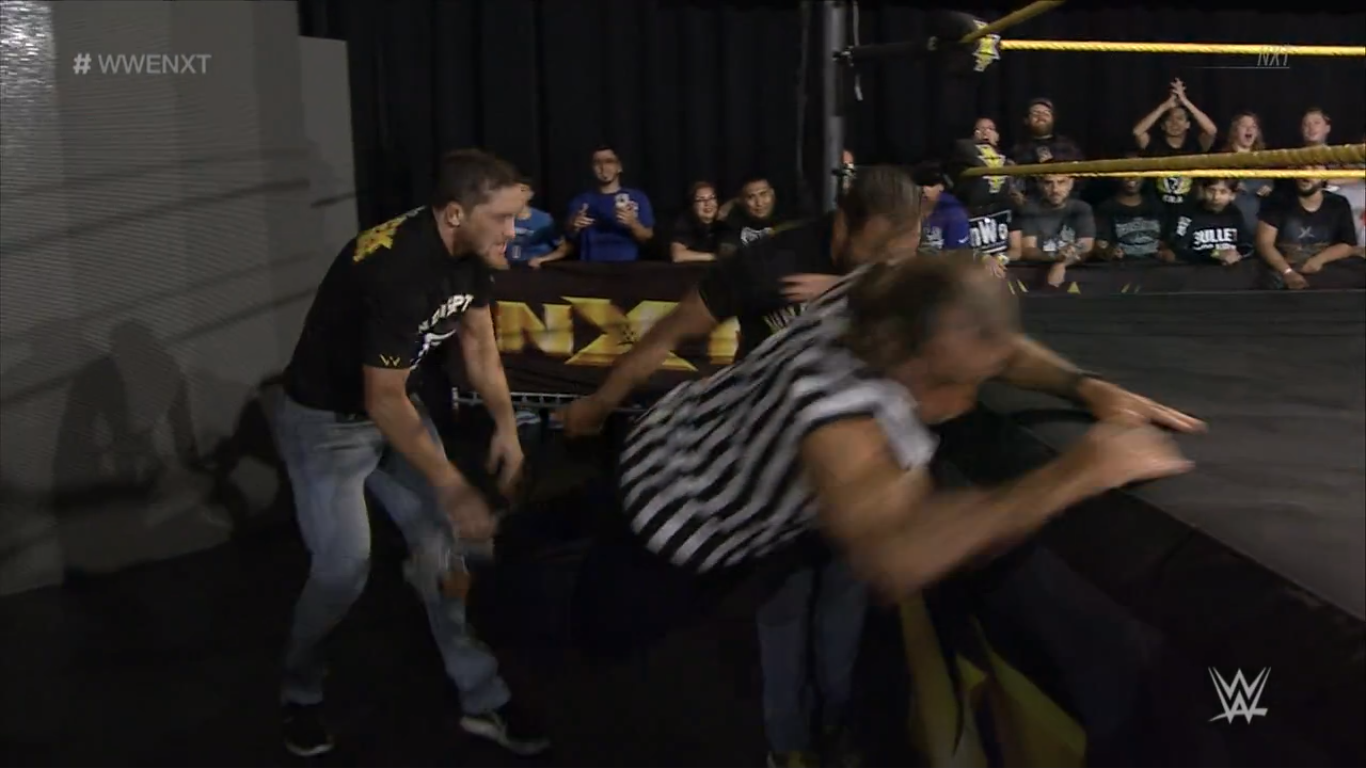 And then attack McIntyre in the ring! 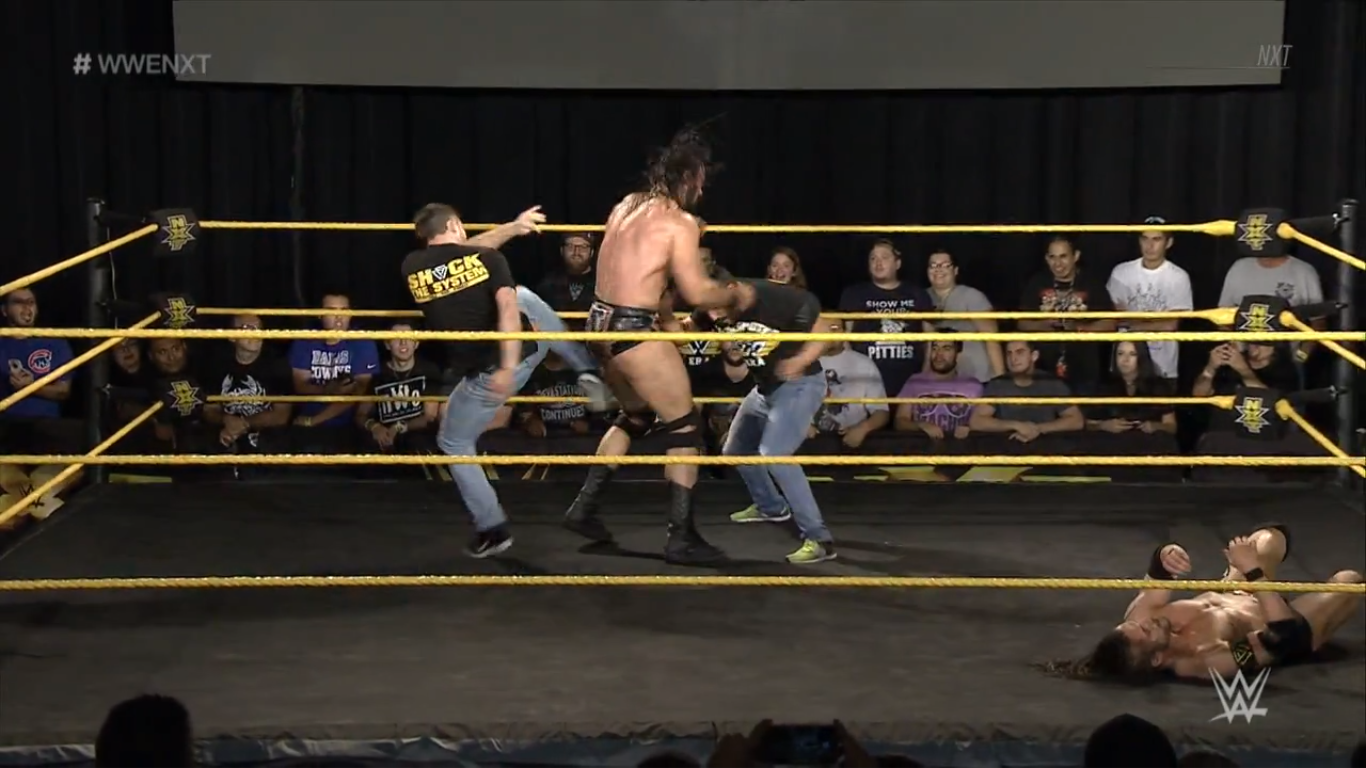 Cole grins as his pals take care of McIntyre for him. Fans boo and jeer while reDRagon circles the downed McIntyre. However, while they bring McIntyre up, HBK stirs and climbs up the ropes. Fish runs, HBK dumps him over the top and he gets tangled up. McIntyre tosses O’Reilly away–almost into HBK–and Fish gets loose to tumble the rest of the way out. HBK gets to his feet, but he’s still woozy. He does eye Cole, though. Fans want it, HBK obliges, he tunes up the band and gives O’Reilly SWEET CHIN MUSIC! 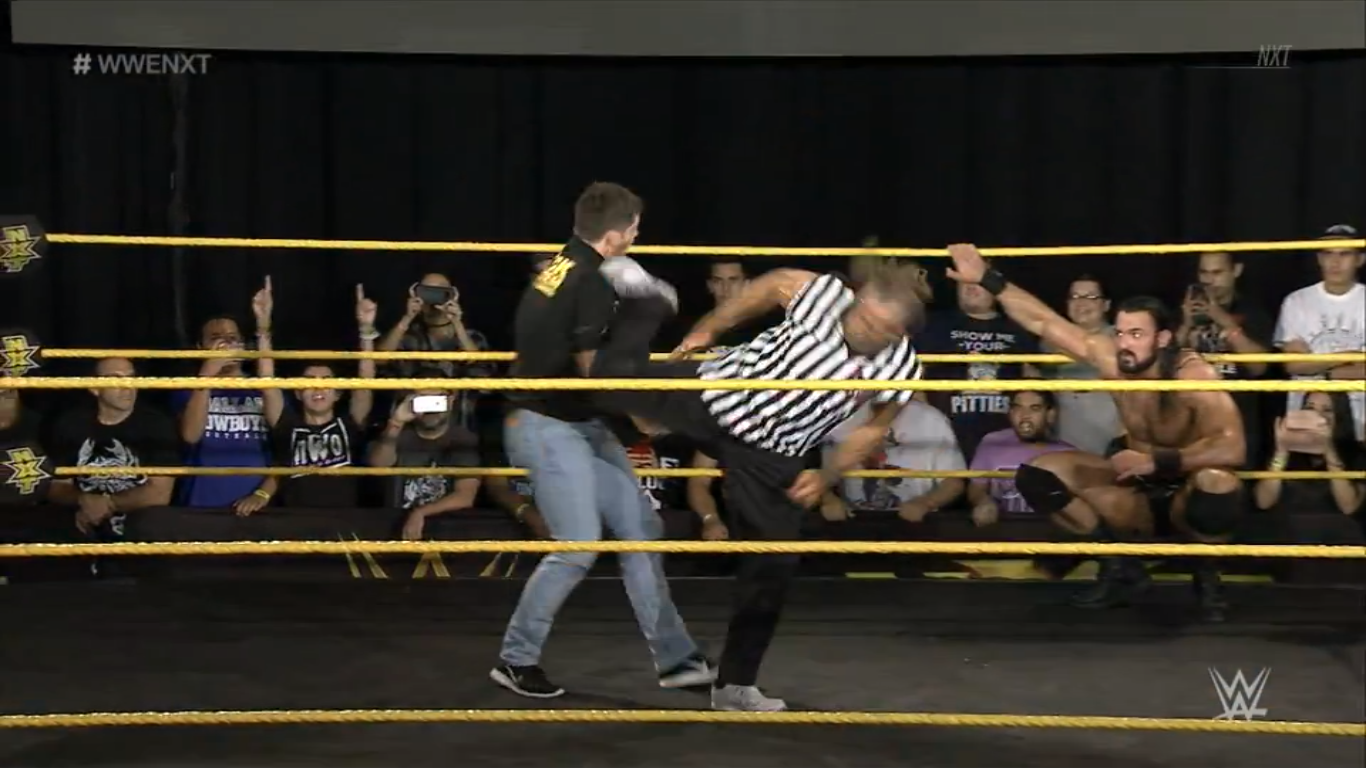 Cole gets up, goes to Superkick HBK again but HBK dodges, Cole ends up in a swinging Future Shock! McIntyre gets his own drums going, and hits another Claymore! McIntyre wins! 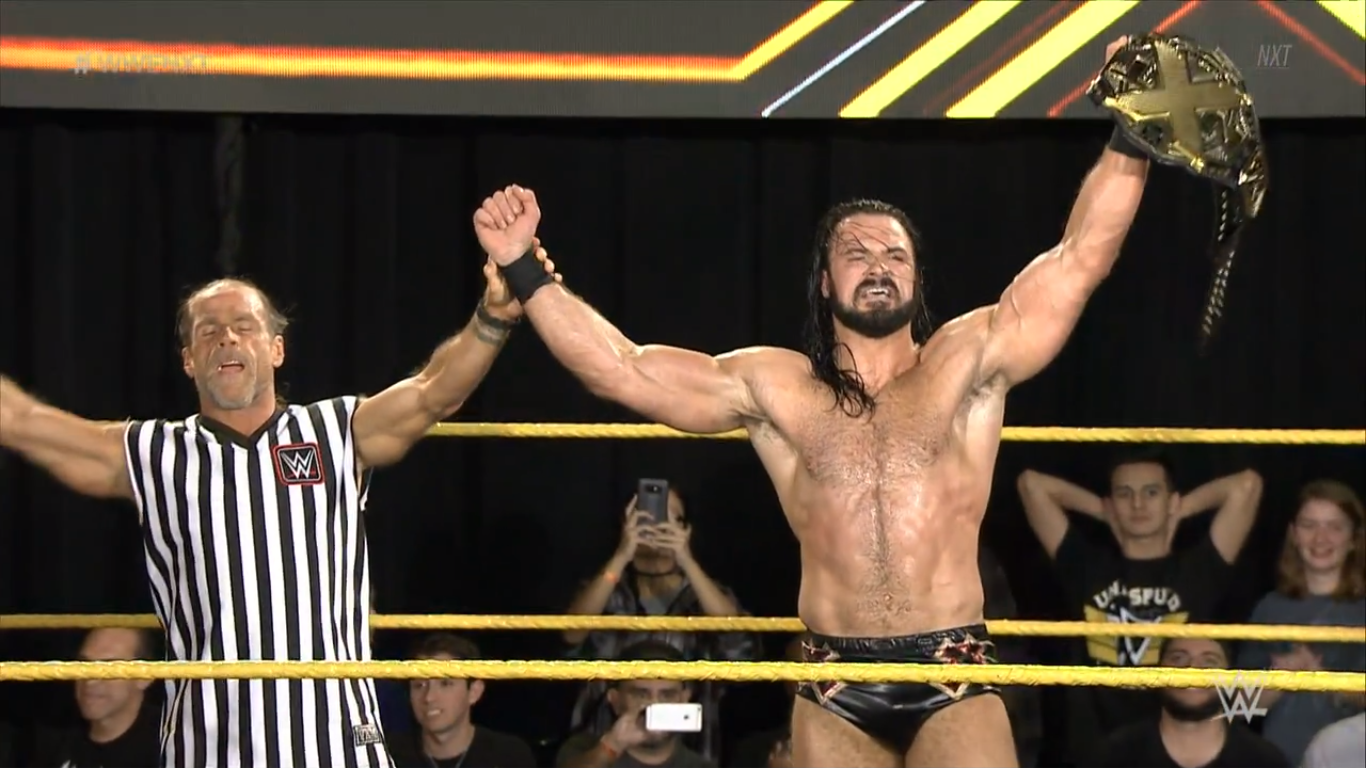 Of course, we know now that McIntyre would move on to lose the championship to Andrade “Cien” Almas at TakeOver: WarGames, as well as end up sustaining an arm injury. Can the Celtic Colossus make a speedy recovery to come back and take back the NXT Championship in 2018? 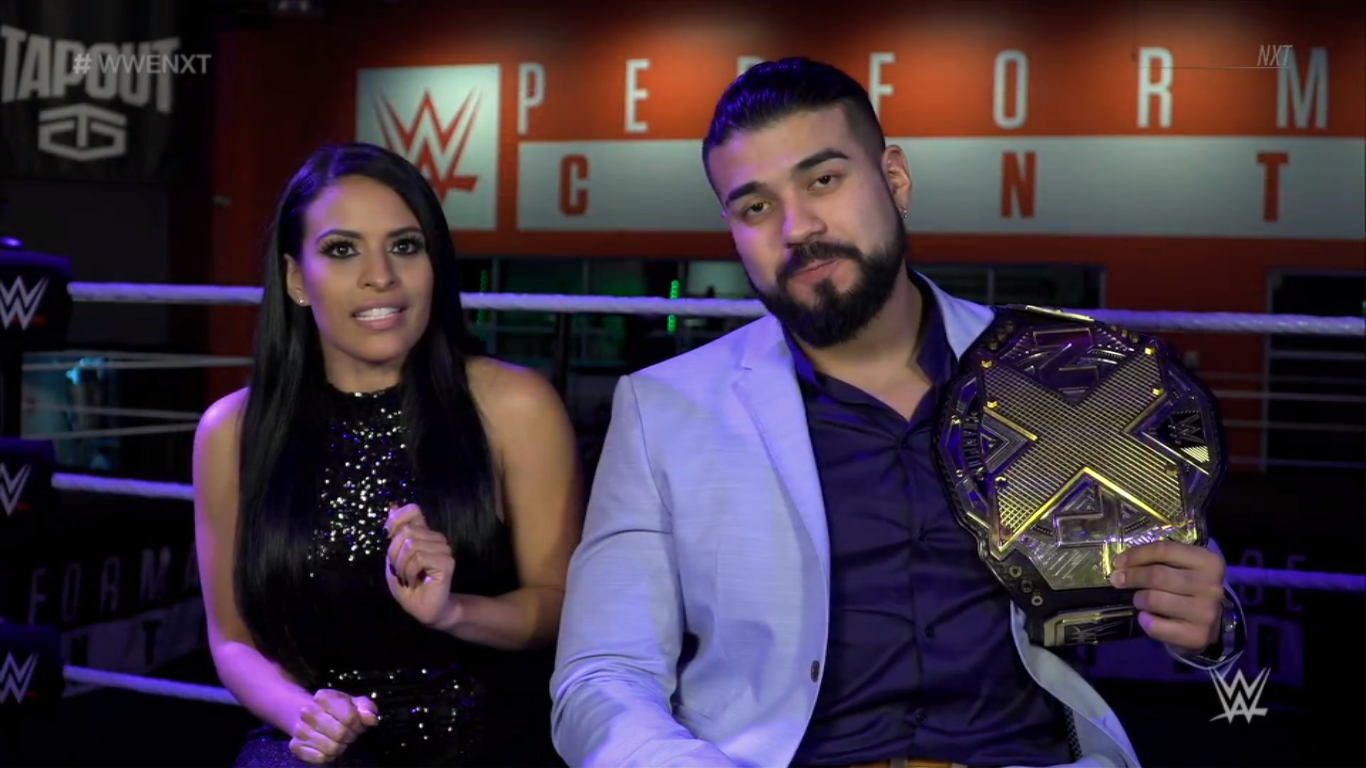 Almas’ first NXT Championship defense will be at TakeOver: Philadelphia and against Johnny Wrestling. Almas & Vega laugh at Johnny Gargano’s charismatic underdog rise. “Make no mistake about it,” they are taking him seriously. But Almas faced Gargano before, and he won then. Now that Almas is champion, he’ll definitely win. “Johnny’s nothing.” El Idolo is prepared for his future. “Johnny Gargano is a broken man.” Gargano isn’t over what happened in 2017, and Vega knows how to mess with his mind. Almas is tranquilo, and the title will stay home with him. Gargano beat seven “incompetent” men, but he won’t beat Almas. 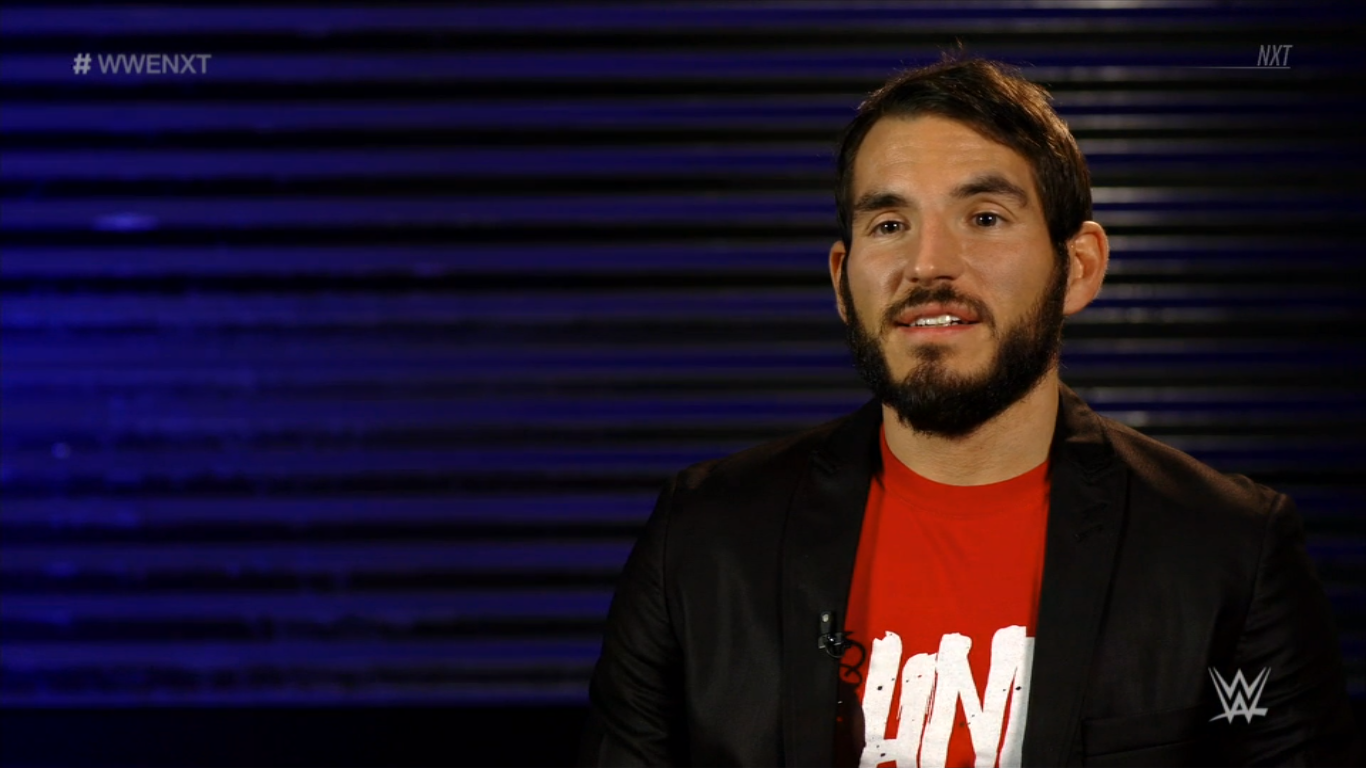 “2017 will be a year I’ll never forget.” It started with Gargano on top of the world, as NXT Tag Team Champion with his best friend. He felt untouchable with Ciampa by his side, but then Ciampa threw that away. Gargano can’t even remember it that clearly. But he did vow to move on, even if it was alone. He worked to return the love and support of the fans, but he struggled for a long time. Zelina Vega even used Ciampa’s betrayal against Gargano. But Gargano made the best of an opportunity, and now he’s headed back to the top. He vows to walk into Philadelphia, dethrone Almas, and become the new NXT Champion. Then, he’ll be on top of the world again, and 2018 will be the best year of his life. The categories for this year are:

Go to WWE’s official website now to vote for who you want!

NXT looks at the rise of the Prophecy of Flames.

Adrienne Reese wanted to be a professional wrestler so bad, she would sneak away behind her parents’ back to train and compete in Houston’s Reality of Wrestling. She would grow in skill and charisma to climb the ladder in ROW, AIW and many other independent promotions across America. She would try but fail to get into NXT the first time, but after a long road back, and with encouragement from the Anti-Diva, Paige, she tried again. And that time, she got in! She would shed her real name, as she felt it did not give her enough power. Thus, Ember Moon was born. And though she struggled against talents like Crazy Cross and The Empress of Tomorrow, Ember Moon would one day Eclipse the other women of NXT to take up Asuka’s mantle. Ember Moon did what many in her life said she couldn’t, and finally achieved her dream at TakeOver: WarGames. She achieved her dream where it all started: in Houston. Ember Moon now faces many challengers, from the Iconic Duo, to the Pirate Princess, to the Queen of Spades. Can her childhood dream continue to fulfill the Prophecy of Flames? 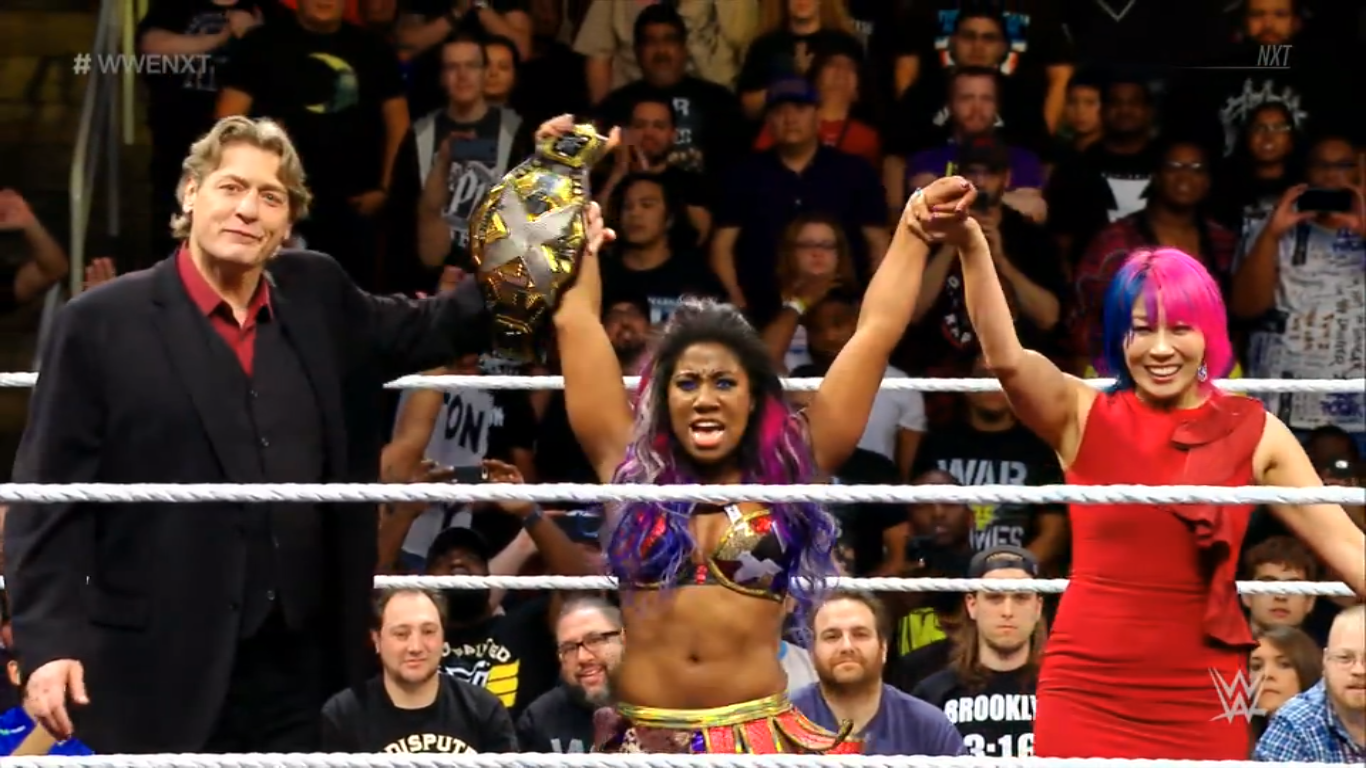 For being two hours of mostly review, this was still a fun episode. It was great to relive the classic moments of this great developmental promotion, and it was great to have some new angles of those moments. The McIntyre-Cole-HBK match was great, and I’m glad to finally see this match, even if it is after TakeOver: WarGames. It went exactly how it should’ve gone, and given how McIntyre was going to lose regardless of his injury, it was good we got to see it at all since we aren’t going to see it now. The interview promos were great, Almas-Vega and Gargano know exactly who they are and delivered as such. Their match could go either way, but it would best fit the story of Johnny Wrestling if he miraculously comes out the winner. That Ember Moon retrospective was incredible, and it finally gives her character what it had been lacking as her build was happening in real time. I hope this means she will reign as champion at least until Wrestlemania Weekend, which will give it roughly five months, and can be punctuated with a TakeOver: New Orleans victory.