All images courtesy of the WWE’s official Twitter; gifs to come courtesy of http://frentique.tumblr.com/

The Mixed Match Challenge finishes its first round! 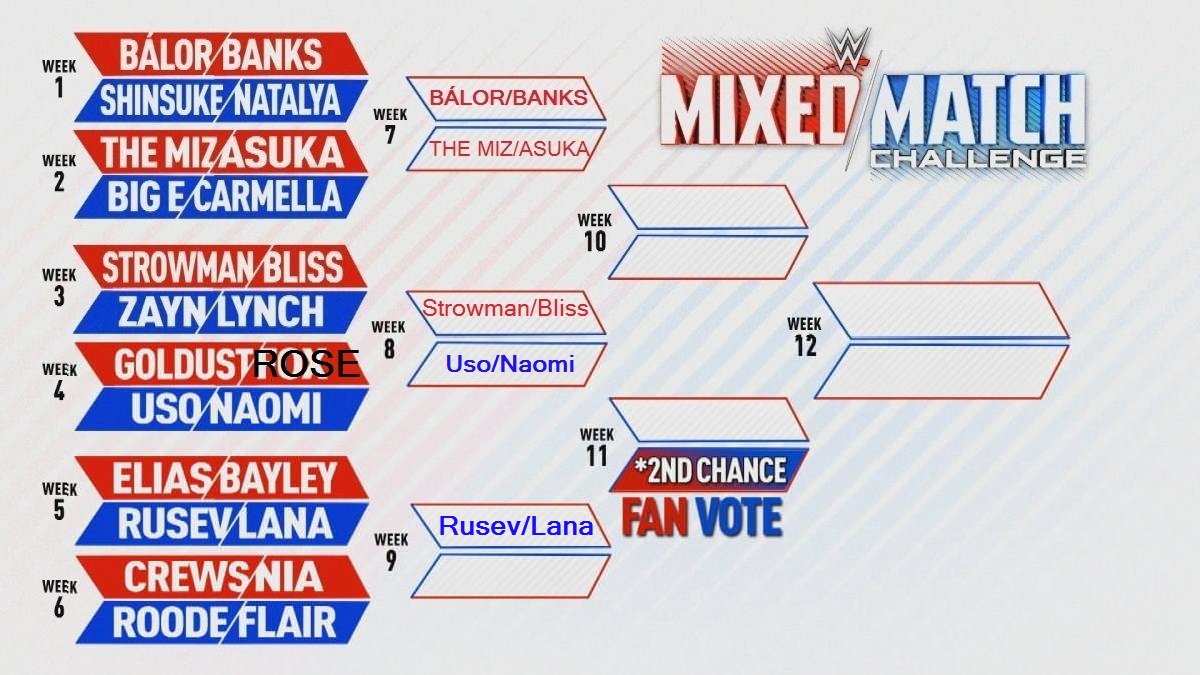 Which team will win to take on Mr. & Mrs. MACHKA in the second round?

The #RobeWarriors are ready to win with some Flair, even if its against the Irresistible Force and Titus Worldwide’s eager recruiter. The WWE United States and SmackDown Women’s Champions represent #GirlUp while Nia & Apollo fight for Susan G. Komen, which team will carry their charity one step closer to that grand prize?

However, there is already some friction between Nia and the rest of Titus Worldwide. Titus and Dana Brooke try to give last minute pointers to Nia and Apollo, but Nia loses her cool and tells Titus to “Shut up!” Luckily Titus takes it as a joke, saying “You are something else.” Titus and Dana exit the ring, and the match begins.

Charlotte doesn’t like his technique, so she gets in to show him how it’s really done.

She then apologizes before exiting and letting the match resume. Apollo and Roode circle and tie up. Roode gets the headlock, shifts to hammerlock, then back to headlock for the snapmare. He then winds it up, and strikes the GLORIOUS Pose! Roode adds more styling and profiling before letting out a “WOO!” They tie up, Roode gets the headlock but Apollo powers out, only for Roode to run him over with a shoulder. Things speed up, Apollo hip tosses Roode down, then arm-drags him into the armlock. Nia mocks the Glorious while fans rally. Roode gets up and powers Apollo to a corner. The ref calls for the break, but Roode chops Apollo sharply. Titus coaches Apollo to hit back, but Roode lets out another chop and another “Woo!” He whips Apollo corner to corner but Apollo goes up and over. Things speed up again, Apollo drops Roode with a dropkick, cover, TWO! Roode backs off to a corner, he “WOO” at Apollo but Apollo counters with “Worldwide~!” Fans want Charlotte and Charlotte wants in to “show you how it’s done.” Roode obliges, and tags Charlotte in. Nia comes in automatically per the rules, and Titus is all hyped up for his client-not-client. The Queen and the Brutal Beauty circle, and the fans let out “WOO!” Nia kicks out a leg then throws Charlotte to a corner. She runs into the corner but Charlotte evades, then goes to boot but Nia evades right back. Roode cheers on Charlotte, Nia tells him to shut up. Charlotte gets the waistlock, but Nia throws her right off. Nia runs back in but gets Charlotte’s boot! Charlotte goes to run but Dana grabs her foot! Nia pounces from behind while Roode protests. Nia has Dana come up onto the apron to tell her, “Stay out of my business!” Dana apologizes, Titus scolds Nia for being so mean. Nia runs at Charlotte but Charlotte turns that into a buckle bump and then rams in shoulders. Charlotte backs off, then dropkicks Nia out of the ring! She kip-ups, wind ups, and does a GLORIOUS Pose with her own Flair.

Roode likes it, and then rallies for his teammate. Nia gets up, Charlotte grabs her by the hair! Titus protests again, but Nia takes care of it with a hotshot. Nia mocks the “WOO” before putting Charlotte in the corner. Nia squashes Charlotte in that corner, then goes corner to corner for another corner splash. She drags Charlotte out to biel her across the way. Nia drops an elbow, covers, TWO! Titus protests the count, but Nia keeps on Charlotte with a suplex. Charlotte blocks, knees in, then rocks Nia with a knee to the head. Nia reverses the whip to send Charlotte into a corner, but Charlotte tumbles to the apron. Charlotte throws a shoulder in, Dana distracts but backs off when Charlotte takes a swipe. Nia blasts Charlotte off the apron, and the referee starts a ten count. However, Nia won’t settle for that, she goes outside to bring Charlotte back into the ring. She warns Dana that if she interferes again, it won’t be pretty. Titus tells Nia to focus, there’s $100,000 on the line. Charlotte pounces on Nia upon reentry, but Nia still fights her off to get the fireman’s carry. Charlotte fights out and runs, for a chop block! Another chop block and Charlotte works that leg. She trips Nia down, and goes for the Figure Four! She gets that much, then works to bridge. Nia is too strong for the bridge, but that Figure Four is still damaging. Nia headbutts her way out of the hold, but the legs are hurting. The fans rally as the ladies head for their corners. Hot tag to Apollo but it’s Roode that rallies! Apollo reverses the whip but Roode brings him down with a clothesline. Roode hits a corner clothesline, then the neckbreaker! He hurries to a corner and climbs up to the top. Roode takes aim at Apollo as he flounders, and hits the flying clothesline! The fans fire up with Roode as he winds up the GLORIOUS Pose again. He kicks, but Apollo avoids the DDT to roll him up. TWO, but Apollo runs to hit the shotgun kick! Another cover, TWO! Charlotte and Nia are back up as Roode revereses a whip. Apollo jumps over to sunset flip Roode, TWO, Roode SPINEBUSTER! Cover, Nia breaks the pin. Charlotte gets to the top rope but Nia rocks her with a right. Charlotte kicks at Nia, Nia headbutts back then climbs up. Nia keeps throwing headbutts but Charlotte shoves her down! Charlotte readjusts while Apollo enziguris Roode. Apollo goes for the standing moonsault but meets knees, Charlotte moonsaults and hits on Nia!

Congratulations on this win, but any words for your opponents? Yes, they have two words, and Charlotte starts of with “WOO~!” She wants to make sure Roode gets it right this time. “WOO!!” He feels he nailed that, but Charlotte just shrugs it off. Whether or not Roode can woo like a Flair, can he and Charlotte continue to be GLORIOUS and VICTORIOUS?

Nia Jax also has something to say to Charlotte and Roode’s opponents, aka her teammates. She’s wanted to say something to Titus for so long. Titus takes off his jacket, getting ready for this. Yeah, feels good, right? Titus, you are NOT a coach! Dana is NOT a statistician. And in fact, Nia did her own number crunching, and “you two are nothing but a couple of zeros!” Titus Worldwide disrupted training, strategy, and this match! Titus has had enough of this, he wants to leave. Does Titus have something to say? No? He always spouts off stuff, like “Titus Worldwide~…” Titus goes to correct her on inflection, but Nia shoves him over the inadvertent table top created by Apollo!

Dana goes to retaliate, but Nia blocks the punch easily. Dana begs for mercy, but gets a Samoan Drop instead! Nia took care of Titus Worldwide all by herself, can she take care of Asuka and her streak to earn herself a Women’s Championship match?