You know what my biggest problem was as a young wrestling fan?

It wasn’t who was getting pushed, or who wasn’t. I didn’t have an opinion on the quality of matches. The screaming announcers were mostly inoffensive.

No, it was when my shows, or even just part of them, would get pre-empted. The summer months were rough for me because WCW Saturday Night would only last an hour some weeks. Atlanta Braves baseball would often take the air at 7:05 Eastern. This angered me greatly as a Cincinnati Reds fan whose team looked up at the Braves in the standings for most of the 1990s. Bad enough the Braves would win most of the games they played against the Reds, did they really have to take my wrestling away too?

As the decade progressed, shows got longer. WCW Monday Nitro started as an hour, then went to two & eventually three. Raw went to two hours to compete. Two hour shows SmackDown & Thunder were added to the schedule. Add in one hour of ECW and a wrestling fan could get his fix on most nights, not to mention weekend mornings.

It never felt like too much as a kid.

I was all about expanding the number of PPV events, especially after my family acquired a black box. Three more hours of wrestling most weeks seemed like heaven. As a young wrestling fan, I couldn’t get enough. WWF Superstars, WWF Wrestling Challenge & WCW Worldwide was a solid Saturday morning block early in my fandom.

WCW was up for some fun stuff. The All-Nighter featuring classic matches & the announcers sleeping over at Tony Schiavone’s house was a great time. I always wished they would do more of those, as it was the days before I had an extensive DVD collection or access to streaming services.

Remember WrestleMania 2000? The event itself ended up being a disappointment, but I still have fond memories of the All Day Long build-up that recapped the fifteen prior WrestleManias. A whole day of wrestling seemed like a fantasy.

The idea of WrestleMania All Day Long sounds like death now. And we pretty much get it every month. WM itself is a bear, but even Backlash went well over the four hour mark. And there’s no way I’m ever watching the Greatest Royal Rumble in its entirety. The Rumble Match & Styles vs. Nakamura was all I needed to see.

WWE isn’t alone in this. New Japan’s Wrestle Kingdom gave WM a run for it’s money in length. It took a month to show it on AXS. ROH’s bigger events have always gone ridiculously long. Then you have most indies, whose shows start late & end later.

Or has the business changed to the point where running long shows just doesn’t make sense?

There’s no doubt that I’ve changed. Along with the natural changes that come with age, circumstances are certainly different. Young Steve Cook had no responsibilities. He could sit in front of the television set as long as he desired. Schoolwork rarely crossed timeslots with wrestling. His social life was non-existent. He had all the time in the world to watch pro wrestling.

This is just exhausting to look at, let along watch!

Let’s take a look at my typical WWE PPV Sunday schedule. I wake up at 5:00 AM to get to my job that starts at 6:45. It continues until 3 PM. I drive home, eat, drink, try to nap & otherwise relax until whenever the Kickoff Show starts. Sometimes it’s 7, sometimes it’s 5. I write my PPV review article for 411, and usually finish with it 15 minutes or so after the show ends, which is anytime from 11 PM to 12 AM. I then wake up at 5:00 AM.

This past Sunday’s Backlash event was further complicated by the fact that the Nashville Predators had a playoff game on Saturday night & I was recapping it for Predlines. I was operating on basically no sleep on Sunday, continued to do so on Monday while working two jobs and will next get a decent amount of sleep on Tuesday night/Wednesday morning. Maybe.

I don’t state all of this to make you feel sorry for me. On the contrary. I suspect many of you have schedules similar to mine. You might not work at your job on Sunday, but you have other responsibilities. You may have kids to keep entertained. The kids might have activities. Maybe you go to church & then somewhere afterwards. During football season, you’re probably watching hours upon hours of that. Maybe it’s at a local establishment. Perhaps you attend a game. Even if America is a largely Christian nation, Sunday is hardly a day of rest.

Most Americans only have a limited amount of free time.

Other nations, where workers get more vacation & have wages that cover their lifestyles, have more time on their hands. Not America. We gotta work to make that money, and money is what gives us value as human beings. That’s what our leaders tell us, and they would know since they have most of it.

We budget our time like we budget our money. We like to be entertained, but we’d appreciate it if it could happen at a certain time for a certain period of time. That way it doesn’t take away time from other things we have to do. The sports world is a great example of this. Baseball is a great game when the two teams involved are playing well. When they aren’t, it’s tedious. The lack of time limit is great for a great game. For a bad game with two teams that have no hope of competing it can feel like a life sentence.

Soccer has gained popularity in America recently while other sports have receded or stayed at the same level. One of the main reasons is you know a match will be over in two hours. You can plan your day around it without worry. A baseball game doesn’t offer that same convenience. They generally last around three hours, but one never knows for sure. It might have some fast-working pitchers & go two & a half. It might be slow & last four hours. You might get extra innings, then who knows when it’ll be over. Forget your dinner reservations!

PPVs used to be pretty well set at two hours & forty-five minutes. WCW tried going over one time without telling the cable companies. It didn’t work. As a kid I could count on the credits appearing on the screen at 10:45. Now that we have WWE Network, we never really know. Sure, there’s a program guide you can guesstimate off of, but when Vince runs the network they can bump the next show pretty easily. Typically it’s some kind of post-show, which I used to love back in the day when they’d air on QVC or whatever channel. In 2018 I can’t imagine sticking around for a post-show.

One could argue that it makes things more interesting. When you don’t know how long the main event is going, it should create drama. Some fans love that. They’re still in the mindset I was at an early age. Back when staying up late was cool & fun, not something you did because of too much work or insomnia.

From what I can tell, most of us would rather go to sleep than find out who wins the Roman Reigns match. I’m not even blaming the Big Dog. If AJ Styles & the WWE Championship were main eventing, we’d feel the same way. Especially if he’s wrestling Shinsuke Nakamura and we’re just waiting for the low blow finish. 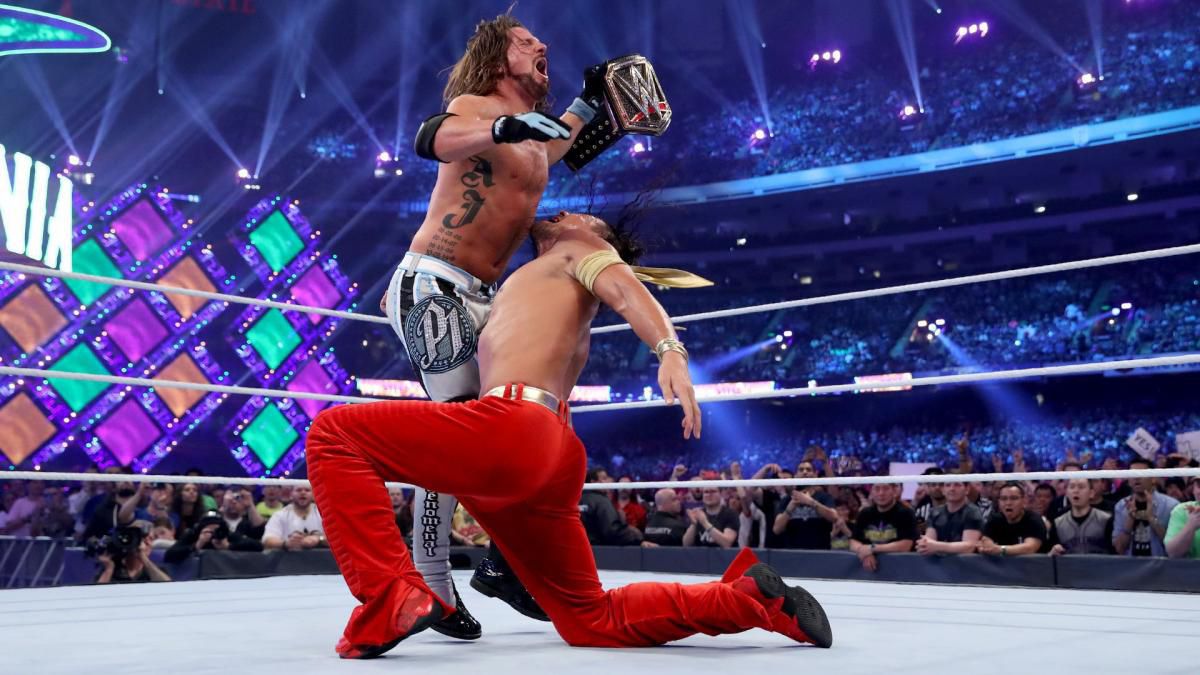 Is this how it feels to watch wrestling now?

Many would say that the wrestling matches have never been better. When you compare today’s in-ring action to the Attitude Era of my youth, it’s ice cream vs horse manure. One advantage yesterday’s matches had is they got to the point. There wasn’t as much pretty chain wrestling or cool finishing moves, but they did what they needed to do to tell a story. Maybe Val Venis & Al Snow would only wrestle for two minutes, but the purpose of the match & what it meant for the ongoing stories involving them was made clear. They didn’t trade moves for ten minutes just for the sake of filling time, which seems to be how things go these days.

If Styles vs Nakamura is going to have a stereo ballshot countout ending, why waste twenty minutes on it? If Reigns vs Samoa Joe is going to be Reigns selling forever until hitting a superman punch & spear, why not shave a few minutes of choke reversals off? Does anybody besides Patrick O’Dowd need to see nine minutes of Carmella offense while Charlotte does nothing? In what world does Nia Jax & Alexa Bliss going ten minutes make any sense?

It’s not like WWE is morally opposed to shorter matches that may leave the public feeling jipped. Remember John Cena vs. Undertaker at WrestleMania?

It’s not our fault.

I’ve read a lot of articles over the years about how wrestling fans are too negative. They should just let themselves be entertained. Sit there for hours upon hours & swallow it all up. That’s a lot easier said than done, especially as you get older. As I get older, I feel my time getting shorter & shorter. The closer I get to the finish line, the more things I want to cram in before I’m done. I’d like to think I’ve got plenty of time left, but one never knows.

Fans like to feel that their loyalty to a company is justified. That the decision they made years ago to watch professional wrestling even though they would constantly get made fun of for it during down periods was worth it. When they’re served up four and a half hours of mostly crap from a roster that should deliver every time out there, they have the right to complain. And they have the right to complain even more if they’re sleep-deprived because of it.

Basically, if I’m going to go without sleep thanks to WWE overbooking a show, I’d prefer that the show have more than one good match. I’ve only got so much time in my life for wrestling these days. I’d prefer that it be well spent.


Let us know what you think on social media @theCHAIRSHOTcom and always remember to use the hashtag #UseYourHead!
Related Topics:Featured BigMonday Night RawMonday NitroNitroRawWCWWCW Monday Nitrowwe raw
Up Next