What is NXT? At the end of the day it’s a developmental territory. Something that has been lost with the influx of indie talents. Since 2014 NXT has felt more and more like indie promotion that just happens to be under the WWE banner.

With all these stars who made their name elsewhere it’s rare when we see a homegrown character like the Velveteen Dream.

While Patrick Clark worked a little on the indies and has always been great in the ring but he didn’t have much of a character. He went through a few characters on NXT TV until finally debuting as the Velveteen Dream. What could easily have been seen as a Goldust rip off Clark pulled it off with his commitment to character.

Then came the feud with Aliester Black. 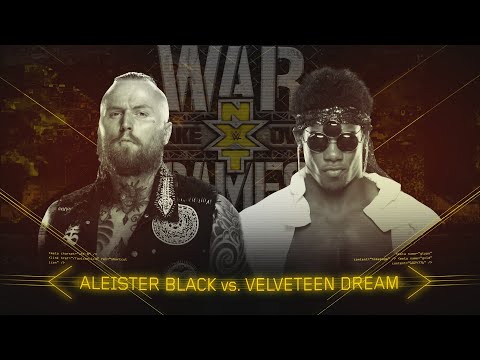 A match up that on paper should never have worked turned out better than anyone could have expected. Dream perfectly played the whinny heel trying to get Black to say his name. They had perfect chemistry in the ring and briefly made you think Dream could beat Black.

That was the moment Dream got over. Not just with smarky Full Sail crowd but with everyone. This could have been a one and done but Dream would go on to have great matches with Johnny Gargano and most recently on TV Ricochet.

The story they’re begin to tell with him and Ricochet is very interesting because it’s an Indie darling vs the PC creation. Dream makes good points about the indie guys taking spots from the PC guys . At the same time Dream is purposely being positioned as a hypocrite because he’s been on the indies. He essentially got Baron Corbin’s anti indie gimmick but he actually has the charisma to pull it off.

A big reason Dream is over because his character is far and above anything else. There hasn’t been anyone who’s come into NXT and completely reinvented themselves the way that he has. Sami Zayn may have had to become a different character than he was before but the fans still chanted Ole because they knew who he was.

Clark came in with no fanfare and had to work from the bottom to become one of the most over guys in all of WWE. Also it helps that he has probably the best elbow drop in wrestling today. Sorry Kairi Sane.


Let us know what you think on social media @theCHAIRSHOTcom and always remember to use the hashtag #UseYourHead!
Related Topics:Aleister BlackFeatured BigNXTRicochetVelveteen Dream
Up Next

The Case for Finn Balor at Money in the Bank 2018