Tiffany MC takes a look at the most legendary ride in wrestling history, The Streak! The Undertaker dominated WrestleMania for three decades, and he may not be done.

For the better part of three decades, the Streak – Undertaker’s unprecedented, never to be repeated win-loss record at WrestleMania, has loomed over the WWE Universe. Once a bit of trivia only known to the true wrestling nerds among us, the Streak didn’t become a big deal until 2005 during Randy Orton’s ‘Legend Killer’ gimmick. The Streak ended up being the one Legend Randy Orton couldn’t kill. Until then, the Streak was never mentioned on WWE television as part of the Undertaker’s legend. It was only mentioned in passing AT WrestleMania, but once Randy Orton brought the Streak to everyone’s attention, it gained new life as a career-making match.

Undertaker has faced, and largely put away, a who’s-who of Hall of Famers, future Hall of Famers, up-and-comers, and Legends. Even the two men who managed to get one over on The Reaper staggered away with their careers altered, knowing that they’ve done the near-impossible.

Needless to say, the Streak is the stuff of legends, myths, and song, but how do the ACTUAL matches hold up? Are the matches that make up the Streak as good as being a part of a legend suggest they should be? This match comes to us from the LA Memorial Colosseum. Undertaker had just debuted in WWF at the previous Survivor Series and had quickly made a name for himself, especially after Brother Love turned over care of the frightening behemoth to the ghastly, and aptly named, ‘Paul Bearer’. Undertaker’s first WrestleMania opponent was the legendary Jimmy ‘Superfly’ Snuka.

We start out with Snuka already in the ring, he’d made his return to WWF a couple of years before, and had mostly been used to put over top heels, such as ‘Ravishing’ Rick Rude. Snuka takes off his headband and robe as the bell begins to toll.

Undertaker and Paul Bearer come out to a surprisingly good pop. Taker has only been in WWF for about four to five months, but had already made a lot of waves. As the gruesome twosome enter the ring, we can see that Snuka doesn’t seem as worried as he possibly should be given Taker’s path destruction at that time. Taker, for his part, shows no reaction to Snuka whatsoever. Paul Bearer gives the urn to the, understandably, uncomfortable referee to hold while he helps Taker take off his coat and hat.

Undertaker dominates this one right from the start, hitting Snuka from behind when Snuka, foolishly, turns his back on him. Superfly manages to get a little bit of offense in, but this one was pretty much a squash. Taker shows off some of the trademark moves we would come to associate with him: Old School, the leaping clothesline. This one ends pretty quickly when Snuka goes for a clothesline off the top rope and caught by the Undertaker, who reverse it into a tombstone for a three count.

Later on in the show, Regis Philbin tries to do an interview with Taker and Paul, but the Gruesome Twosome spend the interview measuring poor Regis for a casket or his funeral suit. It was an unexpectedly funny moment, especially so early in Taker’s WWF career.

Highlight: Taker catching Snuka, who was no slouch, and reversing it into a tombstone.

Rating: 4/10 – I was pretty ‘eh’ on this one. This was a good match, but it wasn’t a great one. Snuka really put Taker over, but I do wish there had been a little more back and forth. 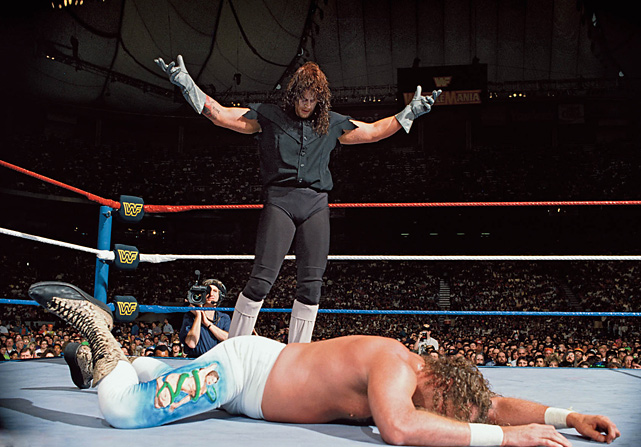 This was Taker’s first WrestleMania feud. He and Jake had actually been allies throughout 1991, until Jake’s obsession with Randy Savage and Elizabeth became too disturbing, even for the Deadman. Showing the aptitude for gray morality that would lead him to become ‘The Conscience of WWE’, Taker stopped Jake from executing a sneak attack on Savage and Elizabeth involving a steel chair.  An enraged Jake demanded to know whose side Taker was on, to which Taker replied ‘Not yours.’. Things rapidly deteriorated between the two, leading to Jake slamming Taker’s hand in a casket during the ‘Funeral Parlor’ segment before WrestleMania and beating Taker with a steel chair, that seemed to have no effect on the Deadman.

Roberts enters the arena first, to a chorus of boos. He also doesn’t have his usual slithery companion because WWF President Jack Tunney suddenly decided that Damien was too dangerous to have at ringside, despite Jake coming out with the snake for years. Anyway, Roberts doesn’t seem bothered by the boos and even has a little smile on his face.

Undertaker and Paul Bearer come out to a pretty thunderous pop. Since WrestleMania VII, and certainly since protecting the beloved Elizabeth from Roberts’ attack, Taker had become a fan favorite and it shows in this crowd.

This match was pretty back and forth. Roberts got the first shot in, getting the jump on Undertaker. Taker no-sells for a lot of it, but Jake is able to get in some offense. Taker is eventually knocked out of the ring, but lands on his feet and pulls Jake out and they fight outside. They finally get back inside, Jake hits the dreaded DDT…and Taker sits up. The crowd LOST it because NO ONE got up from the DDT in 1992…EVER. Jake doesn’t know what to do and hits another DDT. Thinking he’d put down the Undertaker, Jake goes after Paul Bearer, and the urn. While he’s trying (not very hard) to get the urn, Taker sits up. The crowd got even more crazy because if getting up from ONE DDT is unheard of, getting up from a second one is unthinkable.

Taker gets out of the ring and grabs Roberts, and gives him a Tombstone out on the floor, rolls him into the ring for the pin.

Highlight: Paul Bearer trying to hide the urn in his suit jacket.The reaction when Taker sat up from the first DDT. Nowadays, people getting up from a finisher is relatively normal, but that wasn’t the case in 1992. NO ONE got up from the DDT, they just didn’t do it.  Other than the Von Erich Iron Claw, the DDT was probably the most dreaded finisher in professional wrestling in 1992. When you got hit with that, you stayed down.

Rating: 6/10 – In my opinion, this is the best match of Taker’s early WrestleMania career. He and Jake really worked well together.