Rob chimes in on the state of wrestling fandom and the obvious points being missed when yelling at Vince McMahon.

We’ve had two weeks of declining ratings for RAW, and a not so great financial report for the first quarter so those hot takes are flying everywhere.  Now it’s bad enough that financial reports and ratings talk are a regular part of wrestling fan conversations, but it’s only gotten worse the past two weeks,  Which leads me to ask:

Seriously folks, what do you want from Vince McMahon?

They literally gave you everything you were asking for at WrestleMania and in the weeks after:

Everything that you, the complaining on the internet so called smart wrestling fan wanted, you got.  So why are you still mad?

Build and Payoff… and you still aren’t happy!

“Vince McMahon doesn’t listen to the fans, things were supposed to be different!”

What the hell do you call what just happened less than a month ago?  If that’s not listening to you I don’t know what is.  No seriously, you ordered a Big Mac, fries and a coke and he went back on the grill and made it for you himself then delivered it to your house.  And you still complain.  You still wont stop bellyaching.  I mean, come on already.  Last year you didn’t get the winners you wanted or expected and you complained, this year you got them and you still complain.  It’s almost like there’s no point in asking you what you event want or booking the show that way, because there damn sure hasn’t been any reward for it.  Oh, but there are some other arguments of course… 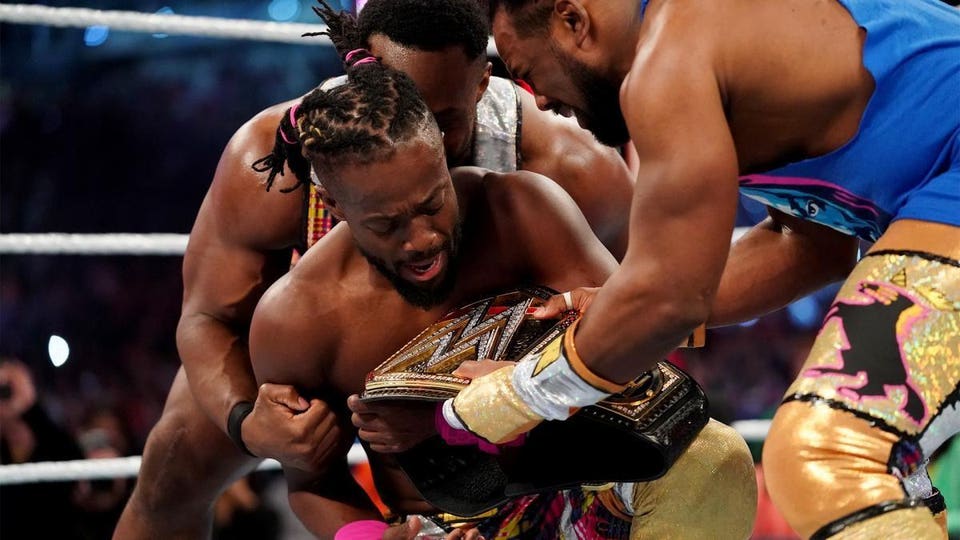 Build AND Payoff…and you still complain.

“Vince McMahon insults our intelligence with the storylines!!  There’s no build for anything!!”

Umm…….yes there is.  Every match on the Money in the Bank card has some kind of story that’s been going on behind it.  Even the ladder matches have some stuff in between some of the participants going on.  But apparently a few weeks of beefing that started before the matches were announced (or in Charlotte and Becky’s case several months) doesn’t count anymore.  Apparently people are leaving the audience because they want the deeper, more intelligent storylines of days gone by like when……..

Need I go on?  I haven’t even gotten to all the flat out nonsense behind all the feuds in the Attitude Era and how they would routinely overturn the results of pay per views that you spent $50 on the very next night on free TV.    I’m sorry, if you’re worried about your intelligence being insulted in 2019 by professional wrestling I don’t know what to tell you.  Maybe you do need to move on because pro wrestling is never going to be The Sopranos or Game of Thrones.  I don’t care how many people tell you it can or should be, it just isn’t.  The Night King didn’t lose a falls count anywhere match and he didn’t get face dumped in a cake backstage.  Arya Stark stabbed him with a knife, she didn’t pin him by trapping him under a forklift while Jon Snow counted to three.  They’re not the same thing and they won’t ever be.

If you can’t deal with silly, simple plots you’re watching the wrong show.  Wrestling is Naomi putting on a great athletic display in the ring and it’s also Naomi fighting Mandy Rose in a hotel room.  Lacey Evans just walking up and down the aisle for three months then stopping one day and punching Becky Lynch in the face because she felt like it is as much professional wrestling as the match they’re going to have in two weeks.  Kofi Kingston had a serious storyline leading up to his match with Daniel Bryan where he won the title, and he also throws pancakes to the crowd on his way to the ring.  That’s the business, folks.  Always has been, isn’t changing.