The answer is No. It’s not too early.

6. NXT teases us with a Matt Riddle-Arturo Ruas match that went 3 minutes? I know it’s not happening, but those guys deserve a Takeover spot. Kudos to NXT for playing up the mma aspect. Everything from Mauro’s commentary to the ref stoppage made this feel like it should have been in an octagon. If you haven’t already seen it, check out Ruas’ match from the Evolve 10th Anniversary show. Dude is a killer.

5. We got the final opening round match of the Dusty Rhodes Everyman Classic. Bronson Reed is good. He delivered what might be the biggest frog splash I’ve ever seen. There is always a place for athletic big men, but he’s not the story.

4. Dexter Lumas is creepy. The key to wrestling is to crank your personality up to 11. If this creepy thing is any part of Dexter Lumas, I don’t want to be in a room with him. I don’t trust him around my kids. I wonder how many crimes against humanity he’s already committed. Creepy in a way that Bray Wyatt can only hope to be.

3. Tyler Breeze enters the running for Savage Burn of the Year. He looked at Jaxson Ryker and asked “Weren’t you Buddy Murphy?” Brutal. That line alone is worth the return of Prince Pretty. 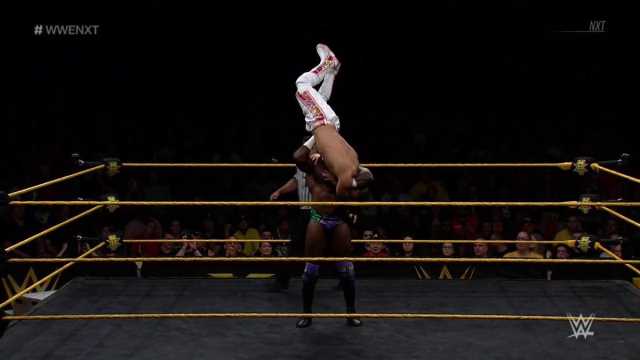 2. I finally got the moment I was waiting for: an interesting KUSHIDA match. I was ready to send him to 205 in exchange for Akira Tozawa. And if this is Apollo Crews, I will gladly take him back full time in NXT. Stellar matchup and worth watching. 4.4 stars.

1. Oh no, this cannot be happening. They’re turning Keith Lee into Kassius Ohno 2.0? He’s talking about getting passed over for the new guys? And he’s jobbing to Damian Priest next week? Been here a year and zero Takeover matches? The Ridiculous Keith Lee deserves better. THIS…CAN…NOT…BE…HAPPENING!!!

Bonus time: Old school versus new generation. Tyler Breeze heads up a cast of NXT OGs to take on Undisputed Era in (cue William Regal voice) War Games to determine NXT supremacy. Keep Apollo around. Throw in Cesaro and Harper, maybe even Samoa Joe, and you’ve got yourself one hell of a brawl. Either that or Undisputed Era versus the Club. I’m cool with both.


Let us know what you think on social media @theCHAIRSHOTcom and always remember to use the hashtag #UseYourHead!
Related Topics:FeaturedFeatured BigKeith LeeKushidaNXT Minus 6Tyler BreezeWarGames
Up Next