Hisame gives us the details on the Finalists of the N-1 and more information on events before the Osaka show!

N-1 VICTORY RECAP
NOAH held the semi-finals of the “N-1 VICTORY” as Typhoon Faxai rolled into Japan. The typhoon was the worst to hit Japan in twenty-five years and caused such havoc in Tokyo (traffic problems, no trains were running, and even the Lawson ticket machine network was affected), that fans worried that NOAH would reschedule the show.

No such thing happened, and 1103 people turned out to see what was described as an “amazing show”.

Yoshiki Inamura destroyed an old man with gout (Masao Inoue) with the Oklahoma Stampede in a match that took only six minutes and fifty-nine seconds.

RATELS and STINGER faced off with Daisuke Harada getting the win over Atsushi Kotoge. Tadasuke went to talk on the microphone, and The Sugiura Army (NOSAWA Rongai & Hajime Ohara) stormed the ring. A mass brawl broke out, which left RATELS standing.

Afterwards (and after YO-HEY had spoken to HAYATA on the microphone and offered Wife a handshake), Atsushi Kotoge and Daisuke Harada had a war of words.

Kotoge said that he would show Harada in Osaka.

Harada told him that he should never have come back to the juniors, and he should quit wrestling!.

The squabble over the challengers for the GHC Junior Tag has been sorted out by the company. NOSAWA (despite his will or won’t I approach to it) and Hajime Ohara (aka The Sugiura Army) will challenge on the 23rd September. RATELS (Daisuke Harada & Tadasuke) will challenge the winners on the 3rd October at Korakuen Hall.

In a brutal match, Alex Hammerstone threw Naomichi Marufuji around the ring. When Marufuji was lying on the floor after the Pendulum Nightmare finisher, Hammerstone grinned, and in a rare moment of profanity, Marufuji raised his middle finger to him.

Marufuji commented backstage that this month he will turn forty, and therefore he can no longer give 100%.

Kenoh and Katsuhiko Nakajima had a stiff as hell match, and kicked the complete stuffing out of each other, many times in the match it looked like one of them had been genuinely knocked out, and they both fell down after hard kicks to the head like weights at various times.

Kenoh emerged victorious after a knock out kick.

Nakajima managed to drag himself to speak on the microphone and say that he didn’t like Kenoh, but he wanted him to go to the finals.

Taniguchi’s N-1 had ended by Kenoh beating Nakajima which put Kenoh safely in the finals, but Taniguchi had one last role to play in this, which was to endure whatever it was that Mochizuki bought to the table and used on him, and prevent him from going to the finals. Taniguchi made Mochizuki tap out via the Wyvern Catch, and later said that he wanted to make sure that someone who was an outsider, did not win.

Takashi Sugiura and Go Shiozaki had a brutal match, which went beyond their previous matches in terms of endurance. Shiozaki’s eyes were burning when Sugiura punched him, but he kept on moving forward and ignoring the repeated attack, but despite all the blows, slams, elbows and chops that flew between them (and Shiozaki opened Sugiura’s chest after just a few moments), Takashi Sugiura emerged the winner.

The finals were now Kenoh and Takashi Sugiura.

Kenoh came to the ring, and said that he had no choice but to win (if he does, this will be his first singles win ever over Sugiura), because if he does not then NOAH will not progress.

Sugiura sarcastically clapped along with the crowd.

Who wins the match and goes to the finals aside, Sugiura proposed one thing that he knew would unite himself and Kenoh once again (and on the early morning of the 16th September on the morning of their match, Kenoh posted that he was in agreement), that they put on a match that would eclipse Jun Akiyama, Keiji Mutoh, Fujita and Sakuraba. 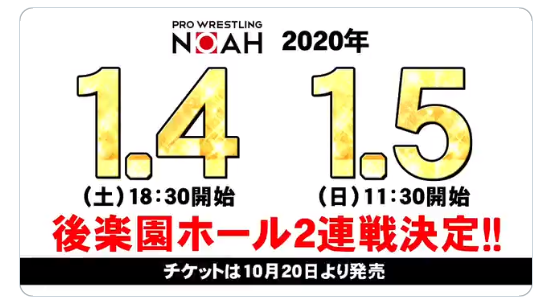 This is the time when New Japan traditionally hold their New Year shows, and this is going to be no different.

On the 4th New Japan will start at 5pm with NOAH at 6.30pm; on the 5th there will be more of a time difference with NOAH starting at 11pm and New Japan in the early afternoon at 3pm.

In addressing this NOAH’s management have said that they want to start the year ambitiously, Takashi Sugiura says that he will put on a match that makes people regret they went to the Dome.