Hisame catches us up on the NOAH build for their upcoming Sumo Hall show!

EVENT RECAP
NOAH started the build up to Sumo Hall on November 2nd with an eventful show at Korakuen Hall on the 3rd October, there were a few big announcements made, which I will discuss in more detail later in the newsletter.

Junta Miyawaki is still on his quest to defeat one of his seniors before Sumo Hall comes round, but sadly fell to Akitoshi Saito. Miyawaki has six chances left to do it in before November 2nd.

HAYATA returned from his absence after having influenza, and he and YO-HEY faced Atsushi Kotoge and Chris Ridgeway. Nothing of any note happened between them before, during or after the match as far as I know, and after it I don’t think YO-HEY tried to wind HAYATA up by stealing the belt; rather there was the usual handshake, which ended with HAYATA warningly holding the belt up to YO-HEY.

As it is his 25th year in wrestling, Minoru Tanaka was presented with a bouquet of flowers after his tag match with Hi69 against Naomichi Marufuji and Masaaki Mochizuki. Marufuji thanked him for coming to NOAH, and Tanaka said later that he hoped to continue being in it.

In the interval NOAH made quite a few announcements via the monitor:
~ Riki Choshu announced the creation of a new belt, The National Championship.
~ RATELS, The Sugiura Army & Kongoh will be holding their own produce shows
~ Eddie Edwards & Super Crazy will be returning to NOAH for Sumo Hall, as would Monster Inoue, Mitsuo Momota and Tamon Honda. Fans would like Edwards to stay longer in NOAH as those outside of Tokyo would like to see him.

The bitterness between STINGER (Yoshinari Ogawa and Kotaro Suzuki) continued as they defended their GHC Junior Heavyweight tag titles against RATELS (Daisuke Harada and Tadasuke). The match lasted only fourteen minutes and one second, as during a four man count out, Ogawa prevented Harada from getting back into the ring by tugging on his trunks, so much so the camera captured something that I am amazed Takashi Sugiura hasn’t picked up on, so the match went to a draw.

Afterwards Tadasuke said that it couldn’t end like this, and he wanted a rematch at Sumo Hall.

Ogawa and Suzuki basically told him no. They have had their match, too bad for RATELS it ended like it did, and they were exercising their champions right to say no.

Daisuke Harada (the cooler head than Tadasuke in this), wasn’t going to be put off, and so the company has set the rematch for November 2nd at Sumo Hall.

Takashi Sugiura and Kazuyuki Fujita faced off against Shuhei Taniguchi and Hitoshi Kumano, with Fujita defeating Kumano. He and Sugiura worked well together, with an article in the press stating that they seemed to be able to communicate without words.

Fujita was vocal after the match however, calling NOAH once again “a boat made of mud” and claiming not to know who Taniguchi was. Sugiura later said with a sigh that Fujita cannot be controlled, and he pretty much does what he wants. 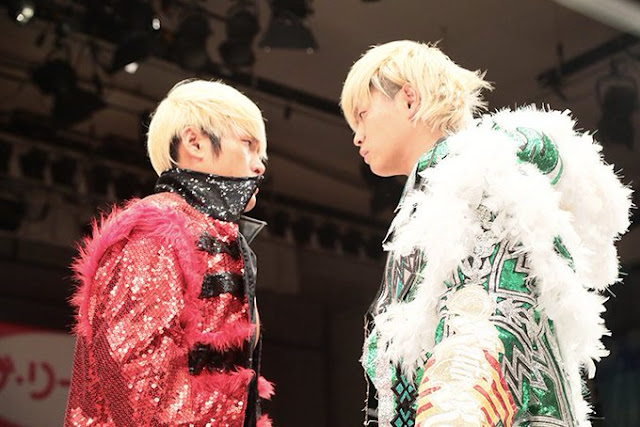 The main event was Kaito Kiyomiya & AXIZ (Katsuhiko Nakajima & Go Shiozaki) vs Kongoh (Kenoh, Masa Kitamiya & Yoshiki Inamura). Kaito Kiyomiya has evidently learned to do two things; drop the “san” from Kenoh when he addresses him, and learn to glare at him. The fight between them went into the crowd, and unusually Kenoh pulled out moonsault variants of his diving footstamp, something that he usually only does for big events (and then only usually title matches or league finals).

Neither Kenoh or Kiyomiya got the win over each other, and if Kiyomiya did make good his promise to use his new submission on Kenoh, Kenoh either got out of it, or he avoided it.

It was Masa Kitamiya who got the win over former partner (and senior student), Katsuhiko Nakajima with the Saito Slam.

As Nakajima was laying on the mat (he may also have fainted afterwards when Shiozaki helped him out of the ring, and then he gave a somewhat dazed promo), Masa Kitamiya gave a somewhat astonishing promo. He basically said that from the day he entered Kensuke Office (also known as “Diamond Ring”), he had hated him, and at Sumo Hall, he and Yoshiki Inamura (who received high praise for the match today), were challenging AXIZ for the GHC Heavyweight tag titles.

Therefore at Sumo Hall ALL the NOAH belts, plus the new one, will be on the line.

THE NATIONAL CHAMPIONSHIP
In his capacity as the chairman of LIDET, Riki Choshu announced that NOAH would be debuting a new belt, “The National Championship” at Sumo Hall on November 2nd. The championship match to decide the first ever holder of the new title, would be between Takashi Sugiura and Michael Elgin.

Other than that I am afraid I have no further details about the stipulation of being a champion for the belt, whether it will be open-weight and the juniors can compete for it, or whether it will be a heavyweight thing. Personally, I think it is probably the equivalent of an intercontinental title, and is designed to have NOAH wrestlers and outside talent compete for it in any promotion and in any part of the world, far easier than they could for the GHC Heavyweight.

THREE PRODUCE SHOWS
NOAH announced at Korakuen Hall that they would be running three produce shows.

RATELS will hold their second produce show on the 24th November at ShinKiba 1st Ring. Fans would like them to hold a second one in Osaka (the spiritual home of RATELS, all having associations with the city, although only Daisuke Harada is from there).

Kongoh will hold their first ever produce on the 14th December at ShinKiba 1st ring.

For probably the first time ever, a produce show will come with a stipulation; LIDET have stated that they will host the show on one condition, Kenoh sells the venue out. If he doesn’t then Kongoh split up, and he leaves the company, BUT, if he does sell it out, then LIDET will book “that place”.

“That place” being of course, The Budokan.

I am afraid that at the time of writing I have no information on cards or broadcast dates, but it seems likely that even if we don’t get to see the whole of the shows, we will at least get to see a decent amount as NOAH are now making more product available online. 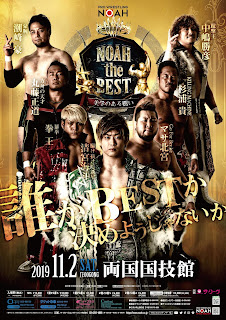 The complete card for Sumo Hall on November 2nd has been announced.

LINKS
Kiyomiya “I received a harsh cheer” from Mutoh, “Are you trying too hard?”
Pro Wrestling Heritage History: From unknown powerhouse to champion, Naomichi Marufuji, the “Genius of The Ark” boasts a high peak of art
The first alliance of Fujita & Sugiura triumph with good cooperation
Autograph & Fan Club schedule (October 9th ~ October 14th)
The Green Guide to the PHOTO the LIVE Exhibition in Tokyo