With Typhoon Hagibis impacting a lot of Japanese companies, Hisame gives us the NOAH perspective on this past week!

Despite the typhoon bearing down on Japan, NOAH managed to run all three of their scheduled shows on the 9th, 11th and 13th of October. They had asked fans not to come out if it would put them in danger, but NOAH managed good attendances for all three nights.

Junta Miyawaki (who has a new submission maneuver) got a singles win, albeit over the rookie, Kinya Okada. However, he is yet to get his wish to beat one of his seniors before Sumo Hall (and I think the Sumo Hall crowd will be on their feet if he does get a win there, especially over a senior).

Hitoshi Kumano took on Sonico in a singles match, during which Sonico bit him!
There is a rivalry building between Minoru Tanaka and Chris Ridgeway, which fans hope will build up into a singles match.

Chris Ridgeway sent the first shot on the 11th October by posting on his Twitter that he was going to be focusing on Minoru Tanaka in their scheduled tag match that day. Tanaka sub-tweeted it with a load of angry face emoticons. They clashed in the match, with Minoru Tanaka at the end of it doing the usual finger point when they squared up, which means (wherever you are), that a one on one is coming.

Nothing has been arranged as of yet, but Ridgeway did say “See you at Sumo Hall”, which will be the continuation of their feud.

RATELS and STINGER faced off in various matches over the three events this week. Yoshinari “Ratboy” Ogawa being up to his usual underhand tricks in Oyama as he caused the match to go to a count out again. The match was spectacular, with everyone moving at the speed of light, and YO-HEY & HAYATA doing a double somersault over the top rope.

YO-HEY and HAYATA had a kind of pre-match in Yokohama which teamed them with Kaito Kiyomiya and Naomichi Marufuji, and subsequently pit Daisuke Harada and HAYATA against Tadasuke & YO-HEY.

Naomichi Marufuji has had a quiet week, being content to let the younger guys on the roster play their part, although he did have his moments; the first being how delighted he was to be able to join in with Tadasuke’s fist pose (and not get pulled off by Daisuke Harada), and then ignoring Kiyomiya when he held the belt up to him.

The match ended with YO-HEY pinning HAYATA via the YO-ROLL.

Afterwards YO-HEY spoke on the microphone, and told “Wife” that it was going to be the “same” at Sumo Hall, and he said it because he knew that HAYATA did not like speaking, and they shook hands with YO-HEY saying that they would make the title match “dignified”.

Yoshinari Ogawa got the win over Tadasuke with a backdrop on the 13th October.

Kenoh’s jealousy of Kaito Kiyomiya, and his paranoia over LIDET treating him badly, trying to keep Kongoh down and favoring Kiyomiya, was sparked in Oyama when their main event opponents of Kiyomiya, Hi69 and Minoru Tanaka were handed flowers by a local idol band, and had pictures taken. Kongoh were unceremoniously shuttled into the corner by the referee, and Kenoh took this slight out on Kiyomiya during the match. Speaking on the microphone later, Kenoh called this action by LIDET “bullying and harassment”, and put them on notice that after he defeated Kiyomiya for the belt at Sumo Hall he would be returning as champion to Oyama, so LIDET (and the Oyama fuckers), had better start preparing his bouquet.

In Yokohama, Kenoh seemingly could take no more and Kongoh came storming to the ring after Kiyomiya’s match in the main event (which none of them were in).

After telling RATELS to shoo (they scattered and left quickly at the arrival of the bigger and angrier heavyweight team), Kenoh got in Kiyomiya’s face. After he was beaten down and had his arms held by THE TOUGH, Kenoh (who looked angrier than I have ever seen him), grabbed Kiyomiya’s hair and told him, “You are really good. Spoiled by the company…no, by the parent company, LIDET. I am made to leave, and Kongoh forced to break up? You are pampered, it is favoritism? You are so spoiled, you are not strong! We will end this repression, and get the belts!”

After this rant, he and THE TOUGH started to beat up on Kiyomiya, and (for the second time), Kiyomiya was saved from this by the arrival of Go Shiozaki (and Katsuhiko Nakajima) who came to the ring, and caused Kongoh to back off.

Kenoh yelled angrily at them as he and Kiyomiya stared at each other, and Nakajima stared at Kitamiya without moving, which left Shiozaki and Inamura, and then left.

Kiyomiya offered a hand to both Nakajima and Shiozaki. Nakajima took it hesitantly, but Shiozaki before taking it, pointed to the belt. The three heavyweight champions were now aligned against their challengers in Kongoh, but it is as Nakajima said, “Don’t get the wrong idea. I am not going to co-exist and prosper with you. I am always watching” (he means the chance to challenge for the GHC Heavyweight).

Their first match together was on the 13th October, and ended with Kaito Kiyomiya defeating Yoshiki Inamura with his stretch plum submission.

GHC TITLE MATCH SIGNING
NOAH will hold the match signing for the GHC Heavyweight Tag Titles (AXIZ vs THE TOUGH) and the GHC National Championship (Takashi Sugiura vs Michael Elgin) on November 1st in Tokyo. Information for anyone who will be attending the event (or would like to attend the event if they are in Tokyo) can be found in the link above. 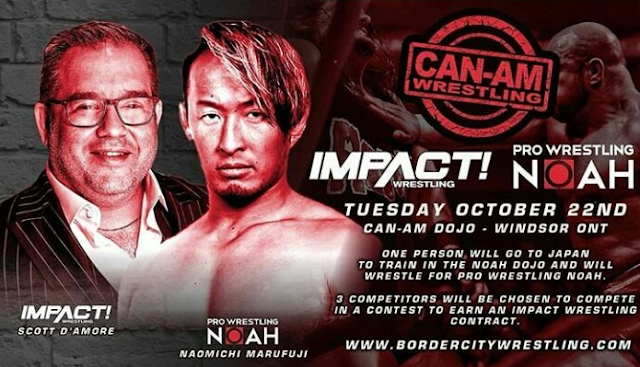 CAN-AM WRESTLING
Following Naomichi Marufuji’s appearance for Impact Wrestling’s “Bound for Glory” on the 20th October, he will be visiting the Can-Am Dojo in Windsor, Ontario, Canada on the 22nd, where one lucky trainee will get the opportunity to train at the NOAH dojo and appear for the promotion.