After a fairly successful 2019, NOAH is ending what could be seen as a recovery year. Hisame helps paint the picture moving toward 2020!

NOAH held the final dates of tour on the 11th and 12th December, with the Kongoh Produce show “Diamond” on the 14th. They officially wrap up their 2019 on the 22nd, with The Sugiura Produce on the 27th which will be the final show of the year.

I am afraid that I don’t have too much information coming out of the last three dates of tour, so the information presented below is not very detailed.

Yoshinari Ogawa continued his torture of HAYATA, and in Morioka stole the GHC Junior Heavyweight belt at the end of the match, and posed with it flanked by Atsushi Kotoge and Kotaro Suzuki to either side of him. From outside the ring, HAYATA propped himself up on his elbow and stared at them.

In Akita, things got worse for HAYATA as he was faced with both Naomichi Marufuji and Yoshinari Ogawa, with both of them working on his legs. The others in RATELS may have been protective over him, but there was little that they could do to defend him, with Ogawa making him scream outside of the ring.

The tide, however, changed on the final night in Aomori, when HAYATA caught Ogawa with the Headache. Kotaro Suzuki realised that something was wrong when Ogawa did not move as HAYATA stood over him, and scrambled into the ring with the seconds. Ogawa was stretchered out, and taken backstage to the trainer, where he (apparently) complained of his arms being numb.

HAYATA spoke in a rare whole sentence to say, “Hey! January 4th…same!”
Unlike the similar situation with Kenoh and Kaito Kiyomiya, NOAH have not released any statement on Ogawa’s condition, and since neither HAYATA or Ogawa use social media, we can only speculate what is going to happen next.

Masa Kitamiya decided to get into the ring and square up to Takashi Sugiura in Akita. Kitamiya was not in the match, he was seconding Kenoh & Yoshiki Inamura. Sugiura later said that he wanted to see something more out of Kitamiya than just a “scary face”.

Go Shiozaki scored the direct win over Kaito Kiyomiya in Aomori City via moonsault following a lariat. Kiyomiya was angry that he lost, but Shiozaki warned him that to him there was no such thing as a pre-match, every single match they had to his mind, was a championship match.

“DIAMOND” – the Kongoh produce
A long tour, a ten hour bus journey, and then the next day a produce show with two matches in one night – this is the reality of the glamorous life of a wrestler.

Kongoh held their produce at ShinKiba 1st Ring on 14th December. It was only a small card with four matches, which lasted at most an hour and a half or so, but a lot happened.

Yoshiki Inamura collided (I think that is the best word to use) with Daisuke Sekimoto in a hard hitting opener. The venue was filled with calls for Inamura, who was not going to give up, but sadly fell to Daisuke Sekimoto’s German Suplex Hold after 13 minutes and 16 seconds. Sekimoto cut a foul mouthed rant afterwards, which ended with him saying that after Inamura trains more, they will do it again.

Kenoh did some light comedy with Masao Inoue, when he and Masa Kitamiya faced The Anti Wrestlers Alliance (Masao Inoue and Akitoshi Saito). The most memorable moment of this match was the building shaking slap that Kenoh gave Masao Inoue, and afterwards Saito trying to pull Inoue of the ring by his ears.

Kenoh had announced that at the produce they would be debuting two mystery wrestlers “X” and “XX” (the hint is in the name), who were revealed in the third match facing Junta Miyawaki and Seiya Morohashi. Kenoh said that they shared the same beliefs as Kongoh. Speculation ranged from Takashi Sugiura, a member of The Sugiura Army, Naomichi Marufuji and even Yoshinari Ogawa.
The two mystery wrestles were revealed to be Yuki Sato (who had left 2AW a couple of days before, but had also been in Michinoku Pro, and Kai-En-Tai Dojo, with some previous appearances in NOAH), and Hi69. Minoru Tanaka, naturally, is not very happy to learn about this.
The two of them were introduced by their two new Kongoh themed ring names, Sato is now “Haō” (“Conqueror”) and Hi69 is “Niō” (the name means “Two Kings” and is taken from the two guardian statues who stand either side at the gateway of Buddhist shrines). They made short work of Morohashi and Miyawaki in only 10 minutes and 42 seconds, and then Niō challenged for the GHC Junior Tag Titles, currently being held by STINGER’S Atsushi Kotoge and Kotaro Suzuki. The challenge has been accepted, and the match set for 4th January 2020 at Korakuen Hall.In the main event, Peta from The Garlic Boys sang Kongoh live to the ring (no dancing, unlike Marufuji’s live entry at another event earlier in the year), and they faced off against NOAH’s heavyweight champions (and people from Kenoh’s enemies list), Kaito Kiyomiya (GHC Heavyweight champion), Go Shiozaki (one half of the GHC Heavyweight Tag champions), and Takashi Sugiura (GHC National Champion).

Go Shiozaki was not happy about this match. It was not his opponents, it was more the fact that he had to team with Kaito Kiyomiya, who he is currently challenging for the belt. Shiozaki refused to speak to Kiyomiya, tag him in, tag him out, or even acknowledge him properly. He only ever made eye contact with him when beating up on Yoshiki Inamura outside the ring, when he gave Kiyomiya, who was standing on the apron, a cold stare.

Kiyomiya, however, remained polite to Shiozaki (and Kenoh for that matter, who yelled at him about something after the match), and even let him leave the ring first at the end.Takashi Sugiura got the win for the team via Olympic Slam on Yoshiki Inamura, and then sarcastically invited Kongoh to appear at the Sugiura Army Produce, partly because it would sell tickets (Kongoh’s own being sold out), and because he had a superstar in mind to face Kenoh, who he would put on just before the main event…this “superstar” was later revealed to be Rikidozan’s grandson, and Mitsuo Momota’s son, Chikhara, and this “before the main event” spot, was revealed to be the opening match! Needless to say, an unimpressed Kenoh and himself, have had a minor Twitter war. 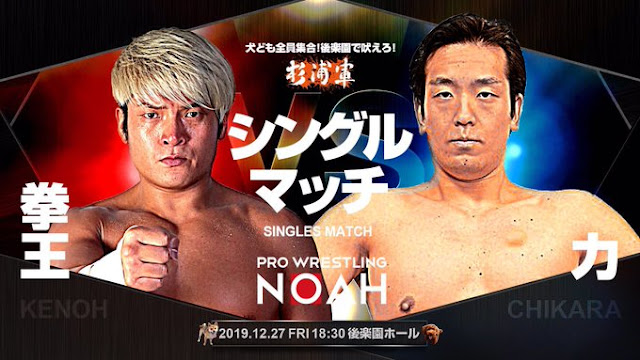 Chikhara had undergone the entry exam for NOAH sixteen years ago, but had failed the required 500 Hindu Squats to enter. Although very upset that he didn’t pass, he persisted in wrestling, and has now wound up back in NOAH. He says he would like to stay more, is excited about facing Kenoh, and wants to have a match with Go Shiozaki like the one between Kenta Kobashi and Kensuke Sasaki with the record setting 500 chops in 2005.

THE SUGIURA ARMY PRODUCE – “ALL DOGS GATHER, BARK AT KORAKUEN”
Naomichi Marufuji has announced that due to being busy with end of year celebrations, he will not be appearing at the produce, instead he will be sending “Dr Marufuji Jnr”, a masked luchador to face El Hijo de Dr Wagner Jnr.

ELSEWHERE IN NOAH
~ To celebrate their 15 years in wrestling, NOAH presented AXIZ with custom made hoodie and track pants.
~ Kaito Kiyomiya held a fan event, with Shuhei Taniguchi on 9th December.
~ Takashi Sugiura, ever the “Company Dog” and dog lover, wore an Akita t-shirt.
~ Naomichi Marufuji defeated Hollywood Stalker Ichikawa at his first ever appearance for DragonGate
~ NOAH’s bus driver is taking part in the Daisuke Harada bootcamp sessions.
~ As it was speculated that a member of The Sugiura Army might defect to Kongoh, Hideki Suzuki posted after the big reveal that the new member of Kongoh was not him.
~ Kinya Okada is still not deemed to be tough enough to be an official member of The Sugiura Army.

“Genuine X”
NOSAWA Rongai said he was disappointed with the mystery wrestlers at the Kongoh produce, and says he will be bringing his own into NOAH/The Sugiura Army, on the 4th January 2020 at Korakuen Hall. His hint was that they are a “first class wrestler”, and he also made a comment about “wanting to sing too…” after being pressed for a hint, and saying earlier how much he had enjoyed hearing Kenoh’s theme “Heartbreak Mosh” live.

Tokyo Sports Awards
Tokyo Sports announced their nominees for the awards for 2019, with NOAH only winning one award this year as Kaito Kiyomiya has been nominated for “Fighting Spirit”, with both Junta Miyawaki and Yoshiki Inamura being nominated for “Best Newcomer”, but sadly losing out.

Kiyomiya says that he is further aiming for MVP and Best Bout for 2020.

Junta Miyawaki injured
Pro Wrestling NOAH announced on the 16th December, that Junta Miyawaki would miss NOAH’s last dates of the year and the 4th January 2020 Korakuen Hall show. Naturally, he is very upset as this is the first major injury of his career, but older and wiser heads have told him to take it easy and get better.

IPW
IPW held their final event on the 15th December 2019, and they naturally did not run the number one contender Battle Royale for the IPW Junior Heavyweight title, which is currently being held by Daisuke Harada. I guess now it is up to Daisuke Harada and NOAH to decide what they are going to do with it, but Harada has hinted that he will take action himself. It remains to be seen if Harada still comes out with it, or whether NOAH now incorporate it into the junior league as a belt similar to the GHC National (although to be honest, I don’t think that would work for them).

THIS WEEK IN NOAH
Monday 16th December: Shuhei Taniguchi, one day manager at Yoneya
Saturday 21st December: Akitoshi Saito will be on Radio Namazu (12:00 JST)
Sunday 22nd December: NOAH hold their final show of the year as a roster, at Kiramesse Numazuki

NOAH have not announced any further dates or live streams (although it is hoped they will stream the Sugiura Army produce show, nothing has been announced as of yet).

The Sugiura Army will speak live on NOAH’s Official YouTube channel about the card on the 18th December at 12.00JST.

LINKS
“Fun has increased” ~ Kenoh, 27th December Sugiura Army Superstar Match and 14th December
Kongoh produce
Kenoh’s “Kongoh” increased to five members at the produce, a “new start”
“It has been a long road, but it has been good to persist” Rikidozan’s grandson reports participation in Noah in front of the grace of his grandfather on the anniversary of his death
27th December 2019 – Naomichi Marufuji misses Sugiura Army Produce, instead the mysterious masked man “Doctor Marufuji Jnr”