NOAH is revving up for their Korakuen Hall shows that will run against Wrestle Kingdom this year. Hisame let’s us know how the build is going for such a lofty challenge!

As a roster, NOAH held their last show of 2019, at Kiramesse Numazu, which was followed by a kind of meet and greet for fans.

Masa Kitamiya got his first pre-match win over Takashi Sugiura (in the last pre-match before the title match in January 2020) via the Saito Slam. Kitamiya also headbutted him, and caused him to bleed. Sugiura (who had a big white plaster on the wound), complained that thanks to “that bastard Kitamiya”, his forehead looked “obscene”.

It’s best not to ask, or to use your imagination. Sugiura’s is bad enough. 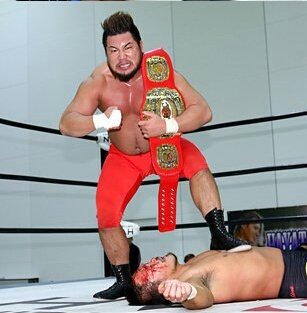 As Sugiura lay on the canvas, Masa Kitamiya took the GHC National belt, and placing it over his shoulder, and a foot on Sugiura’s chest, posed.

NOAH did not ever give any update on Yoshinari Ogawa’s situation after being stretchered off at NOAH’s last event following the Headache by HAYATA, but he was back today in apparent good health, and scowling at RATELS, especially HAYATA.

The match was won by Atsushi Kotoge with the pin on YO-HEY by the Killswitch, and while the fight with RATELS was raging around them, Kotoge and Kotaro Suzuki were ambushed in the ring by Kongoh’s new junior tag team, who are challenging for the titles, Haō and Niō, who beat them down with Niō apparently using Kotoge’s own finisher against them. Haō and Niō then held the belts up to the challengers, before leaving the ring. 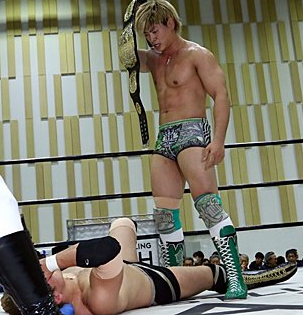 In the main event Kaito Kiyomiya and Go Shiozaki faced off, the fight spilling outside of the ring at one point. Kaito Kiyomiya got the first pre-match win directly over Shiozaki via the Tiger Suplex. After the match he stood over him and held up the belt.

Shiozaki has made no comment about the loss so far, but Kaito Kiyomiya afterwards addressed the crowd and said that he would protect the belt in the first defense of 2020, and steer NOAH in the 20th anniversary year.

PRODUCE NEWS
Kenoh continues on his quest asking people about Chikara Momota, but seems to be coming up short of information (it doesn’t look like Chikara’s family want to help out much either), so Kenoh has said that this match will not go on for long.

The question remains as to why Kenoh even trusted Sugiura in the first place to not only put him up against what he said was a “superstar” and in a match just before the main event.

To give people a little information on Chikara. He is the grandson of the father of Puroresu, Rikidozan, and the son of his second son, Mitsuo Momota. Momota senior had left All Japan in 2000 during the walk out to NOAH, and had been a big part of the company in its early years and what is termed as “The Golden Era”. He left NOAH after Mitsuharu Misawa died during the company shake up. Now an octogenarian, Momota says he has no plans to retire, and he doesn’t even want to hear the word “retire”. He says he will continue wrestling until he is told that promotions have no use “for the old man”.

Chikara had a try out with NOAH sixteen years ago, but he could not do the requisite 500 Hindu Squats in order to enter the dojo. Crushed (and in tears which he freely admits), Chikara would not give up on his dreams to be in NOAH, and worked for a number of different promotions, until returning in 2019 for the Sugiura Army produce. He says he would like to compete in NOAH more in the future.

ELSEWHERE IN NOAH
~ YO-HEY celebrated 11 years in wrestling on the 22nd December (he debuted in 2008 for DragonGate).
~ Shuhei Taniguchi was the one day manager of Yoneya on the 21st December, he looked like he had had a little too much to drink…
~ Katsuhiko Nakajima’s older brother visited the last NOAH show of 2019, and wound his younger brother up by cheering for Naomichi Marufuji.
~ Kenoh said that 22nd was the last event of the year, but he had a vague feeling that there was one more. Takashi Sugiura said something like, “Yes, thank you Kenoh, it’s The Sugiura Army produce”.
~ Naomichi Marufuji has taken to loudly calling Kaito Kiyomiya “champ” when in the ring.
~ NOAH’s bus driver has started to join in with the Harada Boot Camp. He was videoed falling on his head during exercise.
~ NOAH’s president, Akihiro Takeda, was seen at the Kiramesse Numazu event, helping the ring crew to dismantle the ring.
~ Kinya Okada has sworn to get a win by the end of the year.
~ Niō has started using the Cancun Tornado as a finishing move

Wrestler Database 2020
The Wrestler Database for 2020 was released as per end of year tradition by “Weekly Pro”. It basically gives a profile of anyone who has wrestled in Japan in 2020 for the promotions they cover. It lists both gaijin and native talent, and gives a rundown of their sports backgrounds, their favorite food, musicians, and hobbies. NOAH’s entry can be found translated into English, here.

W-1 “WONDER CARNIVAL 2019” PRESS CONFERENCE
Kaito Kiyomiya and Katsuhiko Nakajima attended the press conference on the 15th December for the W-1 show they will be appearing at on the 31st.

It’s going to be anyone’s guess as to how these two teams (and even these four individually) are going to get along, as Kiyomiya made it clear to Daiki Inaba, who he would be tagging with, that he had no intention of not being centre stage, and Katsuhiko Nakajima claimed to Shotaro Ashino, his partner, to have no idea who he was. Nakajima was by far worse and more sarcastic than Kaito Kiyomiya, which Ashino soon visited upon him, to Nakajima’s nonchalant “looks strong”, about his partner and opponent in W-1, he said “sounds strong” when asked about him. Short of replying “Same”, Nakajima then asked the final two questions with, “nothing in particular”.

NOAH have not announced any further dates or live streams (although it is hoped they will stream the Sugiura Army produce show, nothing has been announced as of yet).

Green to red essence: interview with Kiyoshi Tamura (this was published earlier in the year, and was the catalyst for Kenoh’s challenge to him. A lot of fans were angry at this interview, and you can see why)
President Takeda, “We will not lose to the intensity of the venue” ~ 4th January Korakuen Hall advance tickets sold out on the same day as New Japan at the Tokyo Dome
“New Years Fes 2020” GHC Heavyweight and GHC JNR Tag signing ceremony, autograph and photo session
“I asked people close to Chikara Momota about countermeasures, but it didn’t help me at all…” Kenoh’s fight with Rikidozan’s grandson, Chikara, 27th December, Sugiura Army Produce
Kaito Kiyomiya’s declaration of war, New Year, 4th January
Picture credit: Noah GHC, PKDX
In this article:Chikara, Featured, Featured Big, Kaito Kiyomiya, Pro Wrestling NOAH, Rikidozan, Takashi Sugiura