Breaking their coronavirus hiatus, NOAH will be having it’s return show shortly. Hisame gives us all the updates!

NOAH held their first show for a month since having to temporarily suspend activities due to the Coronavirus outbreak on the 21st March at the Yamada Green Dome Maebashi Sub Event Arena. One thing that NOAH have always prided themselves on is making themselves accessible to fans at their events, sadly it was necessary to make them as inaccessible as possible in order to keep themselves, their staff, and their fans safe. The fan club pictures have been cancelled, fans were required to have their temperature taken on entry, wear hygiene masks, and were given hand sterilizer and sterile wipes on entry. Physical contact with the wrestlers, paper tape, and gift giving were prohibited, and after the event Noah made a request for fans not to hang around waiting for the roster to arrive or leave. The autograph session did go ahead, with Go Shiozaki wearing a hygiene mask and standing behind a barrier in an enclosed area.

To celebrate NOAH returning, NOAH surprised fans by streaming three matches streamed live:
Kaito Kiyomiya vs Kinya Okada
The Sugiura Army (Takashi Sugiura & Hajime Ohara) vs Naomichi Marufuji & Minoru Tanaka
AXIZ (Go Shiozaki & Katsuhiko Nakajima) & Shuhei Taniguchi vs Kongoh (Kenoh, Masa Kitamiya & Yoshiki Inamura)
Haoh won his first NOAH match by pinning NOSAWA Rongai, and taking advantage of his size and speed against MAZADA. The NOAH site is showing that he is not a freelancer, and although no announcement was officially made, it appears he has signed with the promotion and is now a full time member of the roster.

Kinya Okada made his first singles match since breaking from The Sugiura Army (Takashi Sugiura was seen watching backstage, as was Kenoh), by taking on Kaito Kiyomiya. The match was in no way a squash and went 9 minutes 49 seconds, with Kaito Kiyomiya getting the win after Okada kicked out of The Tiger Suplex (twice). Backstage Kiyomiya said that he could sense the change in Okada, but warned that kicks against him were no good, he was used to it and was kicked by someone he “did not get along with” (Kenoh).

The pre-match between Takashi Sugiura and Minoru Tanaka that we were not originally meant to get, took place for the first and last time. Sugiura dominated Tanaka, knocking him across the ring at one point, but Tanaka found Sugiura’s weakness, and came very close to making him tap out with the Heat clutch, but Sugiura was saved by Hajime Ohara who broke the hold. In the event of things, neither got the pin on the other, and they had a standoff after the match with Tanaka in the ring, and Sugiura holding the belt outside of it. Frustrated when he left, Tanaka kicked an iron barrier and addressing Takashi Sugiura’s comments about his going to All Japan as Champion and not even addressing the title match, said that it was poor reporting to just dismiss the challenge outright.

Despite the months NOAH downtime HAYATA was taped and naturally STINGER exploited it and exploited it so much that the match went to a referee stop. YO-HEY & Harada were powerless to help him as STINGER made sure they were kept out of the ring. Backstage YO-HEY (“husband”) vowed revenge, double revenge for damaging his “important and precious” wife.

With Kazuyuki Fujita being absent from NOAH, the main event focused a lot on the up and coming Yoshiki Inamura, who had picked up his first big singles win in Big Japan’s “Strong Climb” over Ryuichi Kawakami. There was a growing sense in the match, especially between Shiozaki and Inamura, that Inamura was fast outgrowing the “rookie” title, and was becoming a threat. This impression dawned on Shiozaki throughout the match, and although Inamura lost to him in the end, Shiozaki would not celebrate with Nakajima (Taniguchi squared up to him and left, perhaps hinting he would be the next challenger), until they had left.

AXIZ closed out the event by doing the famous lean.

Kinya Okada’s second single match was against YO-HEY, he threw some kicks, but YO-HEY ultimately won. 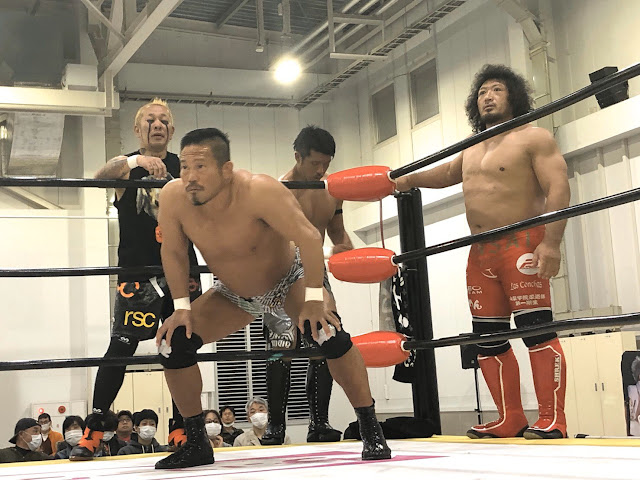 Hideki “Shrek” Sekine (a former MMA fighter, a former policeman, and a man who weighs 113kg and stands at 175cm), made his debut in NOAH teaming with The Sugiura Army against Kongoh (minus Yoshiki Inamura, who will be facing Kaito Kiyomiya later in the event). It was Nioh who ended up taking the brunt of things from Shrek, and who also fell to Takashi Sugiura via Olympic Slam.

The meter rose again as Kaito Kiyomiya and Yoshiki Inamura had their third singles match. Kiyomiya, like Shiozaki, has come to realise that their fellow NOAH born is fast progressing from his rookie era. Kiyomiya showed his mean streak by attacking Inamura’s knee, and got launched across the ring and hit by a human torpedo from the top turnbuckle. Although this is his third loss from Kiyomiya, Inamura has vowed a win over him and in response to this Kiyomiya said that he will be the wall that Inamura will never get around. 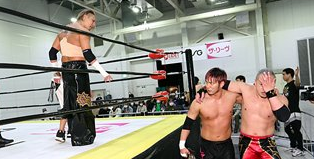 STINGER (Yoshinari Ogawa, Kotaro Suzuki and Atsushi Kotoge) faced off against RATELS (Daisuke Harada, Tadasuke and HAYATA). HAYATA was once again attacked, but there was to be no ref stoppage today, instead following a Tadasuke lariat, HAYATA got the pin on Kotaro Suzuki. While RATELS celebrated, Yoshinari Ogawa protested and said that this was in no way a 3 count, he was pretty sure it was a 2 count. Then a fight broke out which ended with Harada and Ogawa yelling at each other, Kotoge knocked outside the ring and Kotaro kicked in the face by YO-HEY & HAYATA.

AXIZ (Go Shiozaki and Katsuhiko Nakajima) had a very rare tag match, and by that I mean, it was just them. They didn’t wear their sinister feathered crow jackets, instead they came out in their new black AXIZ branded t-shirts. Naturally any match involving Shiozaki vs Marufuji develops into a chop match, and this went on for most of the match with the two of them having red chests after a few minutes. Shiozaki vs Marufuji meant that Tanaka had to face off against Nakajima. During the match Tanaka got Nakajima’s rope choke “Shutter Chance”, which Tanaka managed to back to him, and with the “Click click” motion as well. Tanaka’s woes were not over as Shiozaki finished the match by taking his head off with a massive Gowan lariat.

Afterwards, Shiozaki addressed the crowd asking them to take care of themselves as he would be back. AXIZ closed out the show by doing the famous lean.

DDT’S PETER PAN: CIMA VS MARUFUJI FOR THE FIRST TIME IN 13 YEARS

On the 20th March, Naomichi Marufuji made his first appearance with Disaster Box vs Akito, Yuki Iino & Royce Chambers (who someone really should book against YO-HEY), with HARASHIMA getting the win. After the match CIMA and Sōma Takao came to the ring, with CIMA asking for a match. Marufuji said no as he wasn’t interested in wrestling Sōma Takao, but CIMA remained obdurate saying that if Marufuji didn’t say yes now then ten years would pass again, and by that time they would both be in their 50s. Marufuji relented after hearing how Sōma Takao said this would be his student era dream come true, and match has been set for June 7th.

The issue over the rescheduling of the GHC Heavyweight Tag has been resolved as over in Dragon Gate on the 22nd March, Takashi Yoshida and Diamante called out MochiMaru (Naomichi Marufuji and Masaaki Mochizuki) over it and the date of April 8th has been settled. 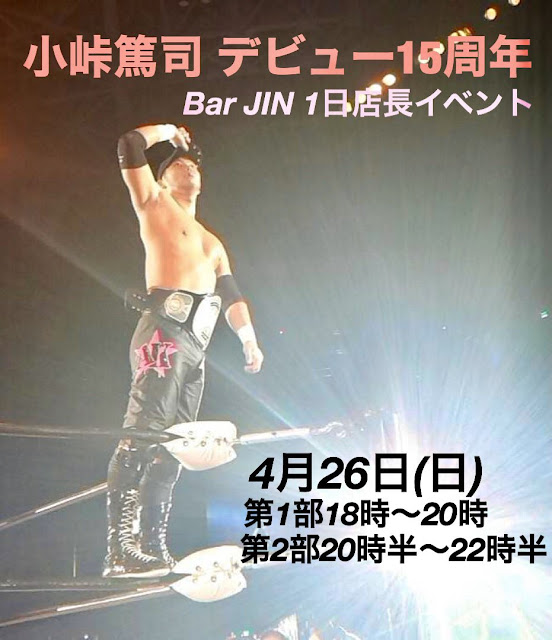 ATSUSHI KOTOGE ANNIVERSARY
Atsushi Kotoge will celebrate 15 years in wrestling this year (he debuted on the 29th April 2005, ironically Tadasuke would debut on the same date two years later and for the same promotion, Osaka Pro) and he has announced he will hold a fan party at Kotaro Suzuki’s Bar Jin on April 26th. Further details to be announced.

ELSEWHERE IN NOAH
~ Naomichi Marufuji filmed a short video of himself, Atsushi Kotoge and Mohammed Yone (who didn’t seem to be wearing pants), throwing a shuttlecock into a cup.
~ Rene Dupree will make his Noah debut on the 27th March at Yokohama Radiant Halls. He will team with Takashi Sugiura and El Hijo de Dr Wagner Jr against Go Shiozaki, Naomichi Marufuji and Mohammed Yone.
~ RATELS seemed to have spent the month not wrestling playing Mario Party and Uno.
~ Hideki “Shrek” Sekine wore his white Sugiura Army “Company Dog” t-shirt on the bullet train, and said people were staring at him.
~ Knowing that fans would like pictures, but two shots are prohibited currently, Naomichi Marufuji posed for pictures in an enclosed area, wearing a hygiene mask and behind a barrier.
~ Kaz Hayashi won the W-1 belt back from Katsuhiko Nakajima on the 16th March. Losing the belt meant nothing to Nakajima, although he did admit he had fun in W-1 (he also walked out to the match being booed, and wearing a hygiene mask which he refused to remove until Kaz tore it off).
~ Naomichi Marufuji superimposed Kotaro Suzuki into his “Animal Crossing” game, when a fan asked what Misawa’s boys were doing, Marufuji said that Misawa would have found it very funny.
~ Kenoh says he has a big announcement to make in his next column

This happened in DDT. It’s legitimate and left a small cut on Marufuji’s head….

CURRENT CHAMPIONS
NOAH have announced that they will hold a small show on March 29th at Korakuen Hall for the title matches only – these being the GHC Heavyweight, the GHC National, the GHC Junior and the GHC Junior Tag.

As NOAH shows are being uploaded to DDT Universe, please consider subscribing. Please do this on the 1st of the month as you will be charged twice otherwise.