As NOAH’s executive officer said in a past interview, as they had no choice but to capitalize on the digital market during the Coronavirus pandemic, Pro Wrestling NOAH decided not to cancel Global Tag League, although they have had to cancel all their live shows. They are still hoping to show the finale with a live audience, but naturally this has a big question mark hanging over it at the moment.

For the first time in NOAH’s twenty year history, Global Tag League has been held behind closed doors, and broadcast live to fans via DDT Network, and because of this we are now going to see more of it than we ever have done before. The first night took place on the 5th April 2020. There will be five “episodes” in total. 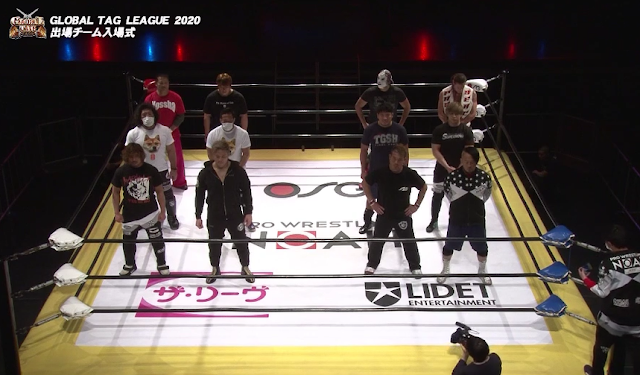 The event started as it would have done in Osaka had things been as normal, with the teams filing out to the ring. The Sugiura Army (Takashi Sugiura and Hideki “Shrek” Sekine) where the only people to wear hygiene masks, and Sugiura turned to Masao Inoue who was standing behind him, to ask where his was.

MochiMaru (Naomichi Marufuji and Masaaki Mochizuki), the current GHC Heavyweight tag champions, came to the ring where Marufuji immediately squared up to Shuhei Taniguchi, and then briefly with Go Shiozaki when they left.

Kaito Kiyomiya came excitedly to the ring, Unchained being the only people who stopped to pose.

Although they are not really taken very seriously by the roster, The Anti Wrestlers Alliance can be a force to be reckoned with when they are serious. Both veterans with experience stretching back into the early 1990s, which they put it to good use today against the younger team of AXIZ. Despite Masao Inoue’s bumbling old man act (i.e. slipping off of the turnbuckles, getting his feet stamped on as he has gout), he managed to keep Katsuhiko Nakajima out of the ring while Akitoshi Saito aimed two hard kicks to the head of Go Shiozaki, and then pinned him with the Death Brand after 17 minutes and 20 seconds.

The veteran team of Naomichi Marufuji and Masaaki Mochizuki, faced the half veteran half bouncy excited young boy team of Shuhei Taniguchi and Kaito Kiyomiya. There might have been no audience, but Kiyomiya entered as if there was, so happy to be back in the ring. As the GHC Heavyweight tag team champions, fresh of their first defence, Marufuji and Mochizuki set out to prove that they would be dominant in the league. While this was not an easy fight, especially since Taniguchi showed how much of a monster he was in the match, it was Masaaki Mochizuki who picked up the win over him with the La Magistral after 16 minutes and 2 seconds. 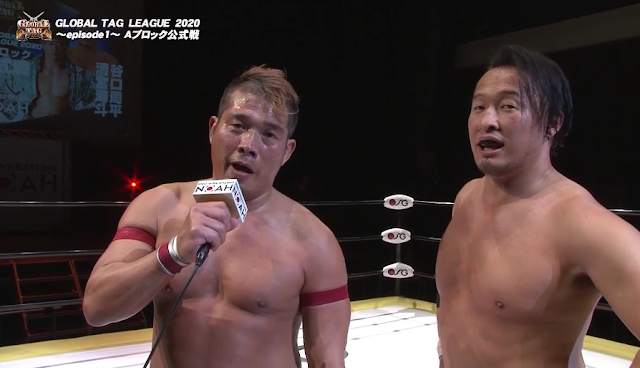 Kiyomiya threw a small tantrum over losing as his team slunk away from the ring (he has since vowed revenge) as MochiMaru spoke to the camera. Mochizuki said if you have a belt, then they are going to come for it, this apparently includes Junior titles too, and not just in NOAH, the Twin Gate is also on their list. As for their belt? You want it, try and take it.

The next episode of Global Tag League (episode 2) will take place on the 7th April.

Tadasuke, however, made up for this by announcing that he would be holding an Instagram live video on the 4th April at 7pm, and he would chat to fans while drinking. Tadasuke indeed drank, he drank a large can of beer, and then two bottles of very strong Shochu, which he watered down with water. There were three videos in total, which ended with him singing drunkenly, swaying, pulling odd poses, and then putting the video on pause and never coming back.

All Japan have announced that they will be cancelling Champions Carnival 2020. This is particularly sad due to Takashi Sugiura’s participation for his 20th anniversary in wrestling.

At the time of writing Atsushi Kotoge’s fan party looks still to be going ahead.

ELSEWHERE IN NOAH
~ Kinya Okada has stepped up his exercise regime as he says that he has put on weight as he is not currently wrestling
~ The Leave released the two new NOAH adverts. Surprisingly Kenoh (looking smiley) turned up in one, and ended it by kicking Atsushi Kotoge in the ass.
~ Masaaki Mochizuki and Naomichi Marufuji successfully defended the GHC Heavyweight titles against Takashi Yoshida and Diamanté of R.E.D. This was done as an empty arena match, with some of the roster (including Marufuji and NOSAWA) as audience.
~ Daisuke Harada turned up at Tadasuke’s drunken video when Tadasuke had got up and gone to get more drink, and asked where he was (YO-HEY did not tune in, and HAYATA does not have social media)
~ NOAH look to be going back to Yokohama in late April, no word on whether All Japan vs NOAH will be going ahead.

As NOAH shows are being uploaded to DDT Universe, with Global Tag League being broadcast live, please consider subscribing. Please do this on the 1st of the month as you will be charged twice otherwise.