With the establishment of CyberFight; Hisame clarifies the new changes and goes over the lead up for the next few week’s title matches!

“There will be no loss of promotion, or changes in individuality”

On the 27th July 2020, DDT\NOAH President Sanshiro Takagi announced that DDT, NOAH and DDT Foods would be merging on September 1st as a subsidiary of CyberAgent called “CyberFight”.

Now, there has been some misconception as to what this means, with people believing that NOAH and DDT will merge into one company. This is not the truth, with the truth being a lot simpler. NOAH and DDT will continue to run as separate promotions, and the character of neither promotion will change. Due to the Coronavirus both have suffered, and CyberFight will therefore be a closer management structure which will oversee NOAH, DDT and DDT’S division which oversees the running of their bars and restaurants. In short, they want to hire the right people for the right positions and usher in a new period in the management of wrestling. They are also aiming to hold a Tokyo Dome show, but whether the show itself will be joint promotion or single, is yet to be finalized. 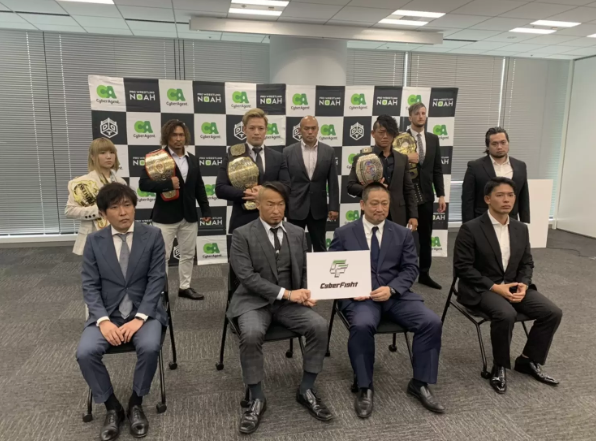 “WHO IS THE LEADER” ~ Atsushi Kotoge wins, but Hajime Ohara still in control

In an effort to end the endless squabbling between Seiki Yoshioka and Atsushi Kotoge, Hajime Ohara suggested that on 1st August they hold a tournament, between just the three of them, to determine once and for all who was the leader of the group. The winner would be the one who got the most wins. However, it didn’t quite turn out that way as they all chalked up one win each. Hajime Ohara then suggested that they hold a three man elimination, which was won by Atsushi Kotoge, which was grudgingly accepted by Seiki Yoshioka. Backstage, Kotoge cut a manic promo, with the one pocket of sanity was his saying they were going to aim for the belts, which Hajime Ohara put in a more sane manner. Kotoge then said that everyone should follow him, including the media. Ohara and Yoshioka left in the deafening silence.

Kotoge naturally made his first appearance on the 2nd August, telling everyone who would listen that he was the leader; this got him bundled out of the ring by Hajime Ohara, imitated by YO-HEY and lariated violently by Go Shiozaki. 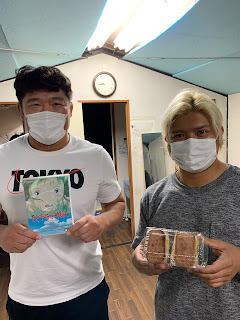 ~ Should Naomichi Marufuji win the GHC Heavyweight championship from Go Shiozaki, he wants to make a defense against Keiji Mutoh.

~ Konosuke Takeshita has expressed a desire to face Kaito Kiyomiya, while in Zero-1, Shoki Kitamura wants a singles match with Naomichi Marufuji at Sumo Hall in March 2021.

~ Kaito Kiyomiya is practicing moonsaults in the NOAH dojo. He has said that he won’t use it in the match against Keiji Mutoh, but chances are that he probably will.

~ Shuhei Taniguchi bought homemade spam rice balls backstage for the roster. They were an instant success.

~ Tadasuke got drunk on Instagram and passed out. Shuhei Taniguchi (who Tadasuke has not had much to do with in the past) was a guest, and he and Tadasuke ended up talking about Studio Ghibli. Tadasuke says he doesn’t remember much else aside from Hitoshi Kumano turning up.

~Neither Naomichi Marufuji or Kenoh got a direct win over the champions they are challenging in their pre-matches on the 2nd August; Kenoh knocked out Kinya Okada and Naomichi Marufuji’s team lost when Go Shiozaki did a massive lariat on Atsushi Kotoge.

NOAH’s anniversary shows on the 4th and 5th August from Korakuen Hall will be broadcast live on G+ at 18:30 JST. Depending on your budget, you should consider subscribing to either iSakura or ForJoyTV. With ForJoyTv you can subscribe for a month (or longer), while iSakura will give you the option of a trial subscription for three days, if you just want it for these shows. I don’t know if these shows will be put on WrestleUniverse (although I think it will be likely). Kenta Kobashi will be the special guest commentator for both nights.

“Aiming to be No.1 in the industry, Tokyo Dome event” Integration of DDT and Noah with the new company CyberFight

“With this right arm, I am going to beat you” Go Shiozaki to Naomichi Marufuji at the pre match

With thanks to Robert


Let us know what you think on social media @ChairshotMedia and always remember to use the hashtag #UseYourHead!
Related Topics:Atsuhi KotogeCyberFightFeaturedFeatured BigGo ShiozakiKatsuhiko NakajimaNaomichi MarufujiPro Wrestling NOAH
Up Next