Hisame brings us updates on the N-1 Victory tournament and post match promos and fallout! Pro Wrestling NOAH keeping the action hot while the autumn chill sets in!

*Takashi Sugiura is both the block and the league leader

The N-1 started on the 17th September with the traditional press conference. Only Masaaki Mochizuki was absent, and his comments were read out by ring announcer, Ally. By far the highlights of the evening were Kaito Kiyomiya’s pursuit of Go Shiozaki and completely ignoring Kenoh, Kenoh obsessing over Kaito Kiyomiya, Takashi Sugiura giving a weary look to Naomichi Marufuji, who spent the event trying to annoy Shuhei Taniguchi, and at one point sticking a label with his name on to him. Most people would have removed it. Taniguchi kept it on.

Night one was held in Nagoya on the 18th September and featured Takashi Sugiura vs Yoshiki Inamura, Kaito Kiyomiya vs Masaaki Mochizuki, Go Shiozaki vs Manabu Soya and Kenoh vs Katsuhiko Nakajima. Due to equipment trouble, NOAH made the event free to all to watch (it can be watched here).

~ Yoshiki Inamura tapped out to Takashi Sugiura after an excellent match

~ Kaito Kiyomiya came across both experienced and mind games in Masaaki Mochizuki. It came to a draw. Kiyomiya says he wants to do this again.

~ Katsuhiko Nakajima knocked out Kenoh, and then to make sure that there was no chance of his coming back to consciousness, punched him repeatedly before pinning him.

After the match Nakajima bent over Kenoh. Kenoh slowly offered his hand, which Nakajima took and pulled him to his feet. Something seemed to be building as Nakajima pulled Kenoh up and they stared at each other, but Nakajima let him go and Kenoh rolled out of the ring. Nakajima then went on to talk about the league, calling it “rubbish” and that he would make it interesting.

Go Shiozaki in Gunma on the 20th, was not going to take kindly to that.

~ Yoshiki Inamura came very close to defeating Naomichi Marufuji, who worked out that Inamura’s greatest weapons were his hands.

~ Masa Kitamiya tapped out to Manabu Soya after a brutal match

~ Masaaki Mochizuki and Kazushi Sakuraba was a short kick fest with MMA meeting Karate. Mochizuki’s plan backfired and Sakuraba got the win.

~ Takashi Sugiura defeated Shuhei Taniguchi, who he was trying to provoke to get some reaction out of him. 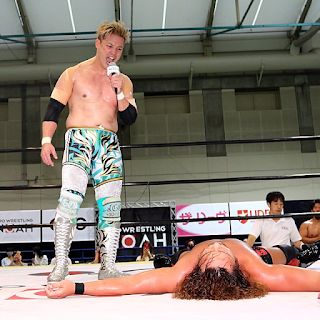 However, the big explosion of the evening didn’t come from an N-1 match, it came when Go Shiozaki teamed with Kaito Kiyomiya, Daisuke Harada & YO-HEY against Kenoh, Tadasuke, Haoh and Katsuhiko Nakajima. For the juniors there was a worsening in the relationship between Daisuke Harada, YO-HEY and The three Kongoh juniors, and for Go Shiozaki it was Katsuhiko Nakajima kicking his damaged arms, shoulder and elbows. The match ended with a wild eyed Shiozaki almost ripping Nakajima’s smirking head off with a massive Gowan Lariat and telling him that if he thought that the league was crap, then he (Shiozaki) would be the one to make it interesting, as “I am NOAH”. Kenoh told him that they would do what they couldn’t do in Yokohama on the N-1 stage. Kiyomiya joined in with all of this, saying that his enemies were not just the people who stood before him and that Kenoh had better make sure he meets Kiyomiya in the finals.

Kongoh will be adding to their ranks, as will Daisuke Harada & YO-HEY.

Kenoh has been hinting in interviews that Kongoh will be growing with the addition of another member. Whoever this person is may well be a NOAH wrestler, as Kenoh said he would be searching for him during the N-1. He may also be the person who Kenoh said was as dissatisfied as he was with the creation of CyberFight.

Daisuke Harada will be bringing a mystery man to the at the Niigata event on the 26th September. Harada says that this wrestler feels the same way he does about what is going on in NOAH between himself and the former RATELS, Tadasuke and HAYATA. However, it won’t be Tadasuke in the match on the 23rd, it will be HAYATA (along with Yoshinari Ogawa and Kotaro Suzuki). 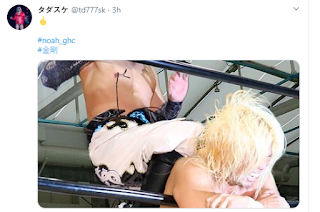 ~ FITE TV  live broadcast (FITE TV will have English commentary, and will be available to purchase for $14.99). You will not be able to watch the FITE broadcast through WRESTLE UNIVERSE.

~ The evening show starts at 18:30 JST and will be broadcast live on ABEMA

“Is there no pride?” A fierce rebuttal against Kenoh & a request for the finals; interview with Kaito

Kiyomiya before the N-1

“I only have the victory and the recapture of the belt in my mind”, Kaito Kiyomiya aims at the N-1 finals on 4th October

“I’ve been thinking, training and getting stronger for as many as I have lost”, interview with Yoshiki Inamura for his first N-1 appearance

The Green Guide to the N-1 VICTORY


Let us know what you think on social media @ChairshotMedia and always remember to use the hashtag #UseYourHead!
Related Topics:FeaturedFeatured BigGo ShiozakiKatsuhiko NakajimaKenohN-1 VictoryPro Wrestling NOAHTakashi Sugiura
Up Next