Andrew opens the JAR with his all new Judgmental Album Reviews, kicking it off with Evile’s Hell Unleashed!

Well, we’ve got movies and anime covered pretty thoroughly; as well as different hot TV series with Bandwagon Nerds and Talk the Kēki. It seems like Chairshot Musical Chairs started up on Mondays as well, so check that out every Monday! Let’s take a review angle with some music now, shall we?

For context, I play three instruments and sing. Last musical endeavor may have been like a decade ago with a local Thrash band called Damage Case, but there’s a level of credibility. Now we get to take a look at Evile’s newest record, first in 8 years and first with new vocalist Ol Drake. 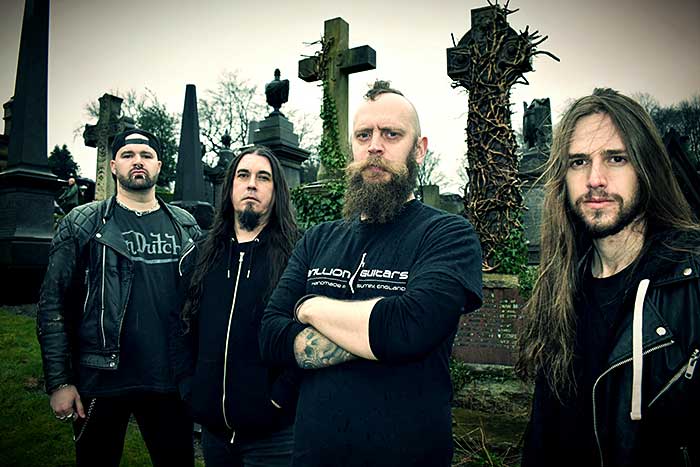 To set the stage a bit, I’ve been a fan of Evile literally since the beginning. My friend over in England (shout out to Cavalier from the EvaMade message boards) used to send me music back in college. So 2004 rolls around and he throws me the All Hallows Eve EP, and this was great. The band sounded like Metallica if they never lost their backbone.

This moved nicely into their first full length album Enter the Grave, which was produced by Flemming Rassmusen, so the classic thrash pedigree was there. Then we move toward Infected Nations, Five Serpent’s Teeth, and Skull. The last of which I don’t remember as vividly as the others, but it was still very much Evile.

Skull came out in 2013, so it’s been 8 years, a few lineup changes for many reasons, a pandemic, and we come to find in 2020 that the original singer Matt Drake left the band a bit before the statement was made; for personal reasons and they’d go through a lineup shift. Matt’s brother and lead guitarist would pick up the vocal duties. So we went from an And Justice for All era Hetfield type voice, to…Max Cavalera?

This entire album is just, not what I expected. It has the fast and attacking thrash riffs we’ve grown to love and expect from Evile, but the vocal delivery leaves a lot to be desired. Death, Sepultura, older Slayer, just the growled spoken yelling style of vocals annoys me. Lyrics are meant to be understood, singing is meant to compliment the instruments since the voice itself is an instrument. Cookie Monster swallowing a microphone is not sonically or harmonically satisfying. If Matt was still the vocalist, I would anticipate this album being one of their best. But Ol is no Matt, and calling him a singer is stretching the definition of the word.

Shit happens, bands change lineups, but there are assumptions made based on track record. This is the same reason why Load, ReLoad and Risk get a lot of flak from the metal community. If any other band released those albums, they’d be solid hard rock; but because they’re associated with Metallica and Megadeth respectively, they are sell out garbage (as is the general consensus). We can also site Queensryche parting ways with Geoff Tate, when Tarja Turunen left Nightwish, Halford leaving Priest, even if things are close, replacements or sound changes are always met with criticism. So even if the music is still thrashy and the aggression is present, the vocal delivery takes this closer to death metal than thrash metal.

Like I previously stated, they still have great thrash riffs, instrumentally harmonic parts and this is really a solid Death Metal offering. Gore has a slow building, South of Heaven style riffing that gets thrashy and attacking before the first verse kicks in, but damn those vocals are rough. The titular track Hell Unleashed has a similar effect where it starts slow with a sound effect and then just brutalizes you with manic riffing. Incarcerated slows things down quite a bit before picking it back up, but the general takeaway with this album is; if vocals don’t affect your judgement that much and you just want aggressive balls to the wall metal, well you’ll enjoy this far more than I did.

The problem comes from the fact that when you go to KFC and are given fried calamari, even if the calamari is solid, it’s definitely not what I expected from Evile. Not my cup of tea gents. And like I said, I’ve been a fan of the band since inception; this was a major disappointment to me.


Let us know what you think on social media @ChairshotMedia and always remember to use the hashtag #UseYourHead!
Related Topics:Album ReviewDeath MetalEvileFeaturedFeatured BigHeavy MetalHell UnleashedMusicThrash Metal
Up Next

Talk the Kēki #6: Josee, The Tiger, and The Fish Review & Summer Season in Full Swing! Musical Chairs returns and, as is often the case, Patrick & Dave are at opposite ends of the musical spectrum with their choices for this week’s edition. Patrick begins the Episode by telling you the many reasons why he loves Florence + The Machine and what makes lead singer Florence Welch such a pleasant surprise when you see her perform live. On the back half of the Episode, Dave continues down the harder path of the musical road by discussing a band that whose latest album was recently reviewed here on The Chairshot, one of the best heavy metal bands to ever come out of the UK, Iron Maiden. Throughout their many roster changes, Iron Maiden has been putting out great music since the 80’s and they get the Musical Chairs treatment here this week.

The Bandwagon continues its unstoppable march to Episode 100, but makes a pit stop at Exit 97 this week. On the show, the guys put a cherry on the top of  This Is Pop as they review the final Episode of Season 1 and offer up their thoughts on the series as a whole. They then recap Episode 6 of Marvel’s What If…?  What If Killmonger not only rescued Tony Stark, but brought the world to the brink of a global conflict? The Nerds also make a quick, but hugely important, stop at the Trailer Park as trailers dropped for (finally) Season 2 of Locke & Key, along with the first trailer for Marvel’s next big series, Hawkeye (Rey Cash could barely contain his excitement). On the second half of the show, Andrew Davis of Popanime Comics (@popanimecomics) jumps on the Bandwagon to talk to the guys about all he has going on at Popanime Comics and his other ventures. Andrew then sticks around to touch on some News from the Nerdosphere with the fellas. Lastly, the guys celebrated Batman Day by talking about The Dark Knight Trilogy. What makes it quite possibly the most beloved trilogy of all-time and how does it stack up with other fan favorites such as the Star Wars Trilogy or Infinity War/Endgame? The Road to 100 gets a little shorter with this extra awesome Episode of BWN!