When Paige made her triumphant return to WWE Raw in late 2017, she was shockingly joined by Mandy Rose and Sonya Deville, in a group named Absolution. The next night, Ruby Riott showed up on Smackdown with Liv Morgan and Sarah Logan in tow as The Riott Squad. Many dismissed the debuts, other than Paige, as fodder for a then-yet-to-be-announced Women’s Royal Rumble, with the assumption that the ladies would be back to NXT (or the independent scene) after the historic Rumble. However, the results have exceeded nearly every expectation.

And the one woman standing out above the rest? Sonya Deville. Is Sonya Deville getting pushed right under our noses?

Like most of the recent call-ups, Sonya Deville has an uninspiring run through NXT. She spent some time associated with Iconic, but that program fizzled out, victims of the company’s over-pushing of Asuka at the expense of the rest of the division. It wasn’t until after her Raw debut that things picked up for Deville, defeating Ruby Riot(t) en route to a shot at Ember Moon’s NXT women’s Champoinship. Although unsuccessful, Deville was showing early signs of a promising WWE career ahead.

Much like Alexa Bliss before her, Deville has had more success on the main roster than in NXT. The early association with Paige definitely helped, but of the five new call-ups, Deville has been protected the most. 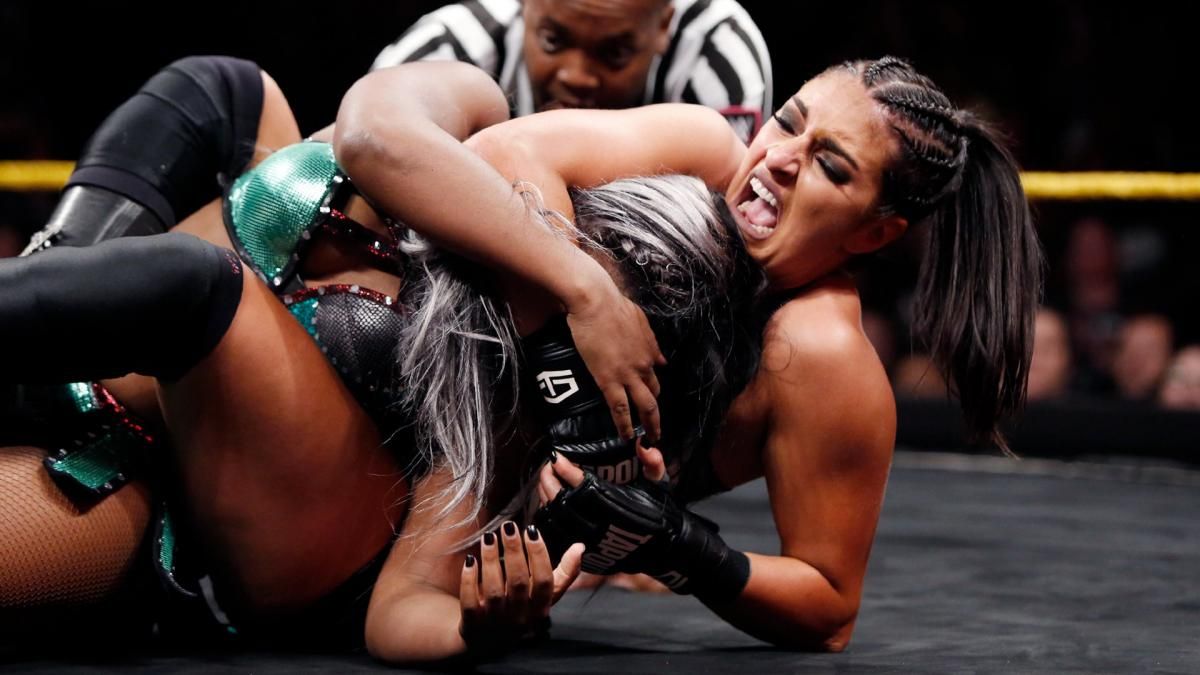 Sonya Deville imposes her will on Ember Moon on WWE NXT.

Need proof? She has yet to eat a fall on television since her debut! Her only losses have come via disqualification, followed by a tag team loss where Mandy Rose tapped out to Sasha Banks’ Bank Statement. That last part is quite important to this hypothesis.

#Absolution‘s @WWE_MandyRose just got her BANK STATEMENT courtesy of @SashaBanksWWE, and it results in a WIN for #TheBoss and @itsBayleyWWE! #RAW pic.twitter.com/rwgWuhykJ0

Since their December debut, Absolution has seen tremendous success over the more established members of the women’s roster, but their biggest win came during Monday’s Raw. Who achieved this singles win?

You guessed it: Sonya Deville!

Sonya didn’t just get Absolution’s first (non-Paige) singles win, she won clean. And who did she beat? The woman who made Mandy Rose tap out last week on Raw–Sasha Banks.

“Sasha throws hands, then forearms, runs and into a tilt-o-whirl headscissors. She dropkicks Sonya down, Sonya ends up in a corner. Sasha runs in with double knees and then again, she climbs up but Sonya is ready to roundhouse her out of the sky! Cover, Sonya WINS! The Gladiator shocks The Boss, can she and Absolution shock the world at the Rumble?”

Sasha Banks boasts five WWE title runs to her credit: four Raw Women’s Champonship reigns with another Women’s Championship in NXT. For Sonya Deville, still relatively unknown to the casual WWE Universe, to get this big win on Raw, speaks to the credibility the WWE is giving her quite early into her run. While this she may be doing this as a replacement for Paige, she’s proving to be ready.

Deville is also positioned very well for the WWE in many areas. First off, she can serve as an opponent for Ronda Rousey down the line. While not nearly as decorated as Rousey, Sonya Deville does hold a 2-1 MMA record, with her lone loss coming via decision and her two victories coming via stoppage and submission.

Deville is also the first openly lesbian member of WWE’s main roster, which can garner mainstream media attention from many corners, something WWE covets.

It’s easy to say that Sonya Deville is lucky, being that she likely got called up to populate the roster for the 30-woman Royal Rumble, and then got more chances due to the injury to Paige. But the old saying claims that luck happens when opportunity meets preparation.

It seems obvious to me that Sonya Deville is getting that opportunity, and she is more than prepared.

You want a BOLD Prediction? Sonya Deville will hold a main roster women’s championship before the end of 2018.