The Mixed Match Challenge’s opening round is now in the second half! 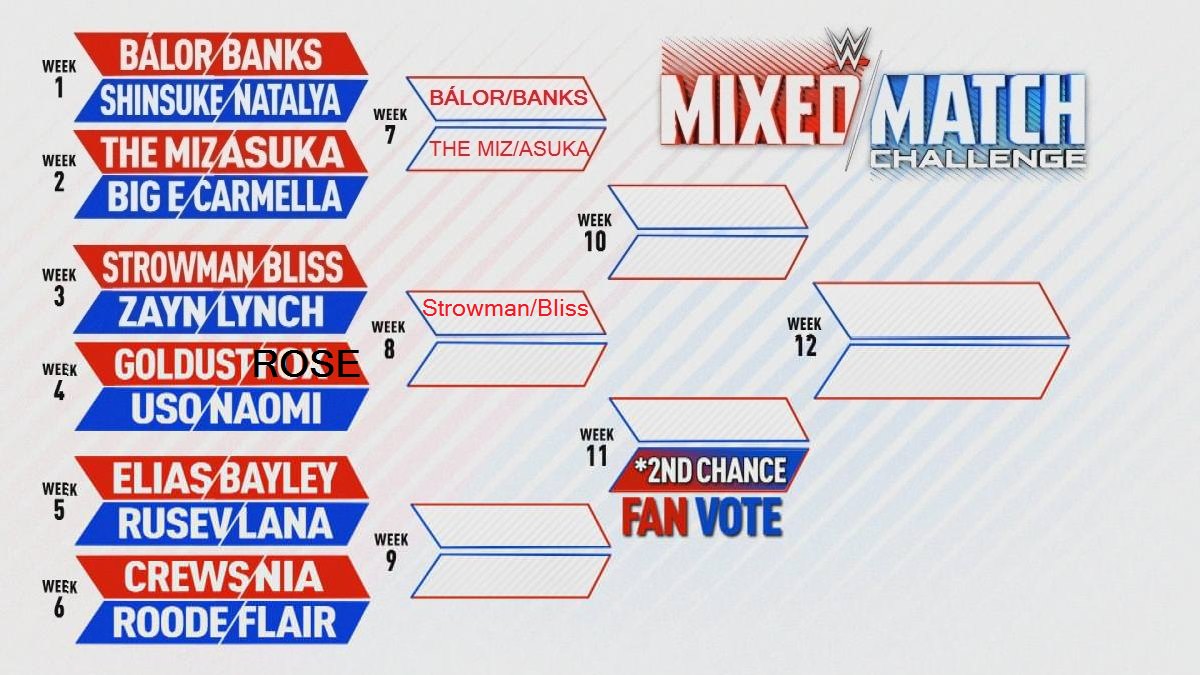 Ms. Crazy Like a Fox went down with injury, but Absolution’s glamorous-in-gold Mandy Rose was more than ready to step up! Can this new #RoseGold duo give us a box office smash? Or will everyone feel the #UceGLOW!?

It’s Hire Heroes USA VS Boys & Girls Club of America in this fourth match of the Mixed Match Challenge!

The votes are in, and Daniel Bryan has been chosen as the special guest referee! The SmackDown GM says hello to each participant and then checks with the teams on who starts. The bell rings and the men start, Jimmy Uso and Goldust circling. Both teams establish they don’t like they other, but Jimmy has some fun rope-a-doping with Goldust.

Goldust copies him, then they tie up. Jimmy pushes Goldust but Goldust runs Jimmy over then stops short. He catches his breath, using his age as his excuse. The fans believe “You Still Got It!” but Goldust claims he “never lost it!” Goldust wants Jimmy to slow his roll, then wants to stand face to face with him. To take a deep breath! Jimmy swings but misses, Goldust arm-drags but then Jimmy pushes him away. The two stare down, Mandy wants Goldust to come over. Goldust crawls, then takes her hand, and gives it a gentlemanly kiss. Jimmy gives his wife a kiss on her hand, too. Goldust and Mandy hug, so Jimmy and Naomi hug. Jimmy then does Goldust one better, he and Naomi kiss on the lips.

The fans want Goldust and Mandy to “Kiss! Kiss!” and Goldust is all for it. Jimmy checks his breath for him, he’s good. Bryan and the fans say “YES! YES!” so Mandy puckers up. Jimmy rolls, but Bryan won’t count that, “No! No!” because that wasn’t fair. Goldust uppercuts Jimmy, and he’s mad that he didn’t get his kiss. Naomi tags in, Mandy comes in, and now the ladies trash talk. Mandy disrespects the highlights, then flips her hair in Naomi’s face.

Naomi gets mad and dropkicks Mandy down! Naomi tells Mandy “Don’t you EVER touch my hair!” Mandy throws forearms to back Naomi down, then whips Naomi to a corner. Naomi goes up and catches Mandy in the twerk attack! Goldust protests but Naomi sliding slaps Mandy down! Cover, TWO, but Naomi keeps on Mandy with an armlock. Goldust cheers on his Golden Goddess and she gets to her feet, we check in with Mr. & Mrs. Rusev Day as they live comment. Back in the ring, Naomi’s headscissors are countered into a facebuster!

Cover, TWO! Jimmy cheers Naomi on but Mandy stomps away on Naomi. Mandy brings Naomi up and over to bump her off a buckle. She hammers away with clubbing forearms, then backs off at Bryan’s count. Mandy puts Naomi against the rope and chokes, then backs off. She snapmares and kicks Naomi, then covers again, TWO. Team Rose Gold grows frustrated, but Mandy toys with Naomi. They end up in a corner and Mandy stomps a golden mudhole into Naomi while the fans rally for Naomi. Naomi kicks Mandy back, then heads for her corner, but Mandy reels her back to throw her down. Jimmy protests, Mandy SLAPS him! Naomi gets mad at that and double clotheslines with Mandy! Both women are down, the fans are rallying. Naomi tags Jimmy, and Jimmy rallies on Goldust! Mule kick to uppercut, then Samoan Drop! Jimmy checks the hair and fires up the fans, running hip attack on Goldust! Cover, Mandy breaks it! Naomi runs Mandy down with a forearm, then brings her up. Together, husband and wife double enziguri #RoseGold!

TWO, and now the fans rally for Goldust and Jimmy. The men stand up, Goldust kicks low and uppercuts. He runs but dodges the drop, to hit Cross Rhodes on Jimmy! Naomi breaks the pin! Mandy slaps Naomi, then runs away. Naomi gives chase, all around the ring, but Mandy sues Goldust as a shield. That doesn’t matter, Naomi slingshots over Goldy onto Mandy!

Jimmy runs, but into an uppercut, to then give back a SUPERKICK! Rear View from Naomi, then the Uso Splash from Jimmy! Uce-GLOW wins!

The other husband and wife team in the Mixed Match Challenge wish to let “Jim” and Naomi know they’re NOT the best married couple around. That title belongs to Rusev & Lana. They’re not going to sing songs unless it’s “Lana is the best~! Lana Number One!” *clap clap* But most importantly, Rusev & Lana vow to CRUSH Elias & Bayley! Then, they’ll celebrate everyone’s favorite day: Ravishing Rusev Dayyy~! They still have to prove themselves, can Rusev & Lana MACHKA The Drifter & The Hugger?