We all got a shot to watch NOAH this week thanks to their YouTube channel! Hisame gives us the deeper dive on the tournament and stories!

NOAH returned to Korakuen Hall on the 29th August to hold another night of N-1 VICTORY after a long and grueling few days in the south of Japan.

Prior to the event NOSAWA Rongai had announced that he would be bringing another “friend” to the show (one of them, either Takashi Sugiura or himself said it would be the last one). This “friend” NOSAWA termed as “The Last Successor”, and gave a clue that it would be someone connected with MMA, as he did want to originally ask Kashin, but he had gone to WWE.
NOAH also streamed the event live via their official YouTube channel.

Sonico (who had returned to the ring from an ankle injury), picked up his first match in the NOAH ring against Junta Miyawaki. It looks like a  rivalry is developing, and this is something that the fans would like to see more of.

Another rivalry continued as Yoshiki Inamura (NAOH’s ever growing tank) and Kinya Okada faced off in a singles match. The match was dominated by the more experienced Inamura (but that did not stop fans from saying that one day these two would probably fight over the title), and at the end of it, Inamura stood with his hands on his hips as Okada was rolled out of the ring.
NOSAWA Rongai (not waiting for the interval this time, as he had something specific in mind for this one), got into the ring. He had bought with him MMA fighter, Kazuyuki Fujita, and naturally a fight broke out between Fujita and Inamura after NOSAWA challenged for a match (Inamura screamed his assent into the microphone), and which had to be broken up by NOSAWA. 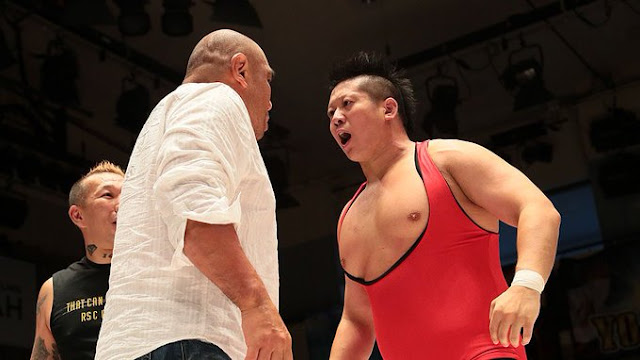 The match has been set for the 16th September at the Osaka Edion 1st Arena, in what is all ready turning out to be stacked card (and with tickets selling well).

Yoshiki Inamura has vowed that he will be bigger and stronger.

MMA fighters entering The Sugiura Army (or at least being allied with them as Sakuraba refused to wear a “Company Dog” t-shirt), makes sense as both Takashi Sugiura and Hajime Ohara have a background in MMA. In his early NOAH days, Sugiura (and Marufuji) used to spar with Yoshihiro Takayama in MMA before matches.

RATELS and STINGER faced off again in a typically fast paced match, with Daisuke Harada getting the win over Atsushi Kotoge.
Kotoge wasn’t pleased about it, and decided to menace the referee about his decision. The referee told him it was three, and then Harada (sitting on the turnbuckle), told him to push off.

Kotoge slunk away with the rest of STINGER, and Tadasuke also left too, while HAYATA showed the solidarity of champions with Daisuke Harada (which Harada was confused about, as HAYATA is not known to be touchy-feely or engage much in hugs with other people), as YO-HEY got into the ring and paraded about with the GHC Junior Heavyweight belt over his shoulder.
HAYATA, naturally didn’t take well to this, and asked for his belt back.

YO-HEY (exuberant as ever) gave it back, and then pulled it back. When he did give it to HAYATA, he kicked it at him, which HAYATA ducked.
YO-HEY assured him that all was well, but later posted on social media that he “felt sorry for wife”, but this was how it was going to be (i.e. him winning the belt. As a side note, and in typical YO-HEY style, he retweeted a tweet about himself and HAYATA tagging for the first time saying it was when he “first started dating Wife”).

Squabble over, they were pictured all standing together at the interval signing autographs at the merchandise table, Tadasuke was also with them – but there was a strange change in their usual line up. Usually when all together, Harada and Tadasuke will stand together and YO-HEY and HAYATA. This time, HAYATA stood next to Harada and Tadasuke separated him and YO-HEY.After a match with The Sugiura Army, and getting the win over Katsuhiko Nakajima, El Hijo de Dr Wagner Jnr seemed to have become a member of The Sugiura Army, as he was seen to be wearing a “Company Dog” t-shirt.

During the interval NOAH announced (via a shouty video) that Rhyno would be coming to NOAH to compete in their September 16th Osaka Edion 1st Stadium event.

Rhyno’s opponent(s) are yet to be announced, but he has had no shortness of roster members looking forward to possibly taking him on. Hitoshi Kumano included.

Kaito Kiyomiya and Alex Hammerstone teamed up to take on Naomichi Marufuji and Shuhei Taniguchi.

Marufuji said he had been looking forward to taking on Hammerstone, but found that he was basically thrown around both inside and outside of the ring. Kiyomiya pretty much stayed out of it, as he was enjoying watching them all fight each other, even his tag partner.

Taniguchi demanded to start with Kiyomiya, and then when the tag with Marufuji came up, refused to tag him in immediately.

Kenoh & Masaaki Mochizuki (who calls himself “an old man of 49”) faced off in their first singles match in the N-1 VICTORY. The match was so brutal that the day afterwards, Kenoh photographed himself in a dojo mirror with a huge bruise on his face from Mochizuki’s Triangle Kick which won the match.
This match was stiff as hell (at one point I thought that Kenoh was genuinely knocked out), and I urge you to go to NOAH’s official YouTube and watch it.

It has also made my Match of The Year 2019 list.The main event was Go Shiozaki vs Masa Kitamiya. This was another brutal match, in which Shiozaki showed that he will do anything to win, even pulling up the crash mats outside the ring, which is something he does not normally do. In the event of things it was Kitamiya who took advantage of it, and drove Shiozaki’s knees into the floor.

This was not a technical match, rather it was a display of raw power and strength. Go Shiozaki emerged the victor with a massive Gowan Lariat.

NOAH will be back next on Friday September 6th.

TAKAYAMANIA
Yoshihiro Takayama held his second fundraiser event, “TAKAYAMANIA EMPIRE 2” to cover the costs of his medical bills on the 26th August 2019 at Korakuen Hall.

NOAH wrestlers took part with Masao Inoue being destroyed by Daisuke Sekimoto in 9 minutes, 54 seconds (Minoru Suzuki once wailed that Takayama’s “crazy ideas” were driving him mad, as he had no idea what it meant for him, the booker), the team of Daisuke Harada, Junta Miyawaki and Kaito Kiyomiya defeating Konosuke Takeshita (who would like a singles match with Kiyomiya), Mizuki Watase and Yuki Ueno, and in the main event Hideki Suzuki & Minoru Suzuki wrestling Masato Tanaka & Naomichi Marufuji to a draw.

The highlight of the evening was Kenta Kobashi chopping Minoru Suzuki, and the handshake which put the past behind them, between Naomichi Marufuji and Minoru Suzuki.

NAOMICHI MARUFUJI’S 21 YEARS
Naomichi Marufuji celebrated 21 years in wrestling on August 28th. It looked like he had a small party (complete with Moet champagne) at Yamada Maru (the former “MUSCLE GRILL”, which I believe he now owns, rather than just manages).

“COME AT ME YOU BASTARDS”
Kenoh’s weekly article was one of the funniest ones he has ever done, especially as he believes in this one that there is a collusion between LIDET & Puroresu Weekly, says that they are overprotective of Kaito Kiyomiya (and yet somehow Kenoh seems to be the person who worries the most about him and what will become of him in the future if LIDET continue to “coddle” him), and funniest of all, seems to be keeping track of Kiyomiya’s movements by saying that his sources tell him that Kiyomiya went out for a drink with the company president and another big wheel!!

Kenoh also said that he wanted to be in one of The Leave adverts.

I owe a big thank you to Purodino for stepping in and translating it. 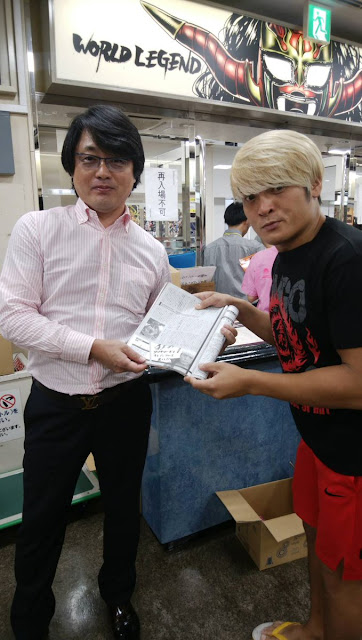 After this, “Weekly Pro” photographed Kenoh showing his article to the president of The Leave after Korakuen Hall. Kenoh told them to “shut up” and said that he was indebted to the man, and was merely being polite.