Hisame brings us some Pro Wrestling NOAH N-1 Victory updates now that we’re  only a few days away from learning who makes it to the finals!

N-1 VICTORY RECAP
NOAH are wrapping up N-1 VICTORY with four consecutive dates, which will finish with the semi finals at Korakuen Hall which will take place on the 9th September, and therefore will be reported on next week. The four dates in this latter stage of the tournament have (and will) take place in the metropolitan Kanto\Kansai areas (Yokohama, Tokyo, Osaka).

The card was changed on the first night as Chris Ridgeway fell ill and was therefore withdrawn from the event (he was back in Yokohama though, and says he is feeling better and starting to put weight back on by eating a little more).

The card change meant that Tadasuke was drafted in to taking on Kinya Okada (which he called “refreshing” after so long fighting STINGER), leaving the other three to fight their enemies. HAYATA got the win over Atsushi Kotoge, and then YO-HEY got into the ring holding both the IPW and the GHC Junior heavyweight belts. YO-HEY had more sense to hand Harada’s belt to him than to mess around with it (Harada gave him his famous glare), but HAYATA was a different matter, and once again he was parading round with it, and then pretending to give it back before withdrawing it. He did much the same in Yokohama a few nights later, even going to far as to have it over his shoulder while raising HAYATA’S arm for the win.

It is only a matter of time before HAYATA gets irritated with this behavior.

Shuhei Taniguchi when outside the ring and fighting Naomichi Marufuji, stretched out his arms into a “T” shape. Marufuji (kind of like the fans) looked baffled as to why this was (is it a “T” for “Taniguchi” or else his Wyvern pose?), and even referee Shu Nishinaga seeing that something was going on outside the ring asked, “is everything all right?”

Go Shiozaki and Takashi Sugiura clashed in a tag match, with Shiozaki said to be laying into his opponents with chops that were louder and harsher than before. I would expect their epic battle at Korakuen Hall on the 9th to be beyond their usual, and surpass “The Golden Era” they evoke when they wrestle.

NOAH live streamed the 7th September show from Yokohama Radiant Halls on the 7th September. There were a few teething problems (a spell of buffering, and a screen freeze), but these problems happened early on and did not recur again in the show. Demand is growing both among fans (and some Japanese media outlets) for there either to be more live shows, or a streaming service to start.

It was at Yokohama Radiant Halls that another element was added to the RATELS vs STINGER feud.

The junior “company dogs” from The Sugiura Army entered the fray when after their match, Yoshinari Ogawa offered the dreaded handshake to NOSAWA Rongai. NOSAWA looked at his outstretched hand, and then after shoving a protesting Hajime Ohara out of the way, shook it. However, NOSAWA can be just as devious as Ogawa (albeit more in a thug like way) and then low dropkicked him, before hitting him with the Shining Wizard.

NOSAWA then got on the microphone and told the fallen Ogawa that he and Ohara were challenging for the titles.

Indignant at this, Tadasuke and Daisuke Harada stormed into the ring. Tadasuke took the microphone and told NOSAWA that if anyone was going to challenge “asshole”, it was going to be them. NOSAWA after telling Tadasuke he was a pest, “a blonde asshole pig” and Daisuke Harada a “mini gorilla”, he said that he would be happy to grant them a number one contenders match.

Tadasuke pointed out that such a stipulation could only be granted by the company or by the champions, and he was neither, “asshole”. After this a fight broke out, which was broken up by YO-HEY & HAYATA.

In Fukushima, NOSAWA & Ohara sat at the back of the venue at a table watching RATELS vs Stinger. Yoshinari Ogawa was not amused when NOSAWA decided to get in the ring, and although I don’t know what was said or exactly what happened (this is why a streaming service is so badly needed), things looked to have gotten rough with only RATELS being left in the ring afterwards.

As for Daisuke Harada and Atsushi Kotoge; Harada has maintained that he doesn’t want this title match with Kotoge as Kotoge has “no presence”. He posted a picture to his Twitter after the match on the 8th, which looked like it was something out of the male equivalent of “Mean Girls” with a post that basically said that Kotoge came back to the Juniors as he couldn’t take being a heavyweight, but he couldn’t take being a junior either. 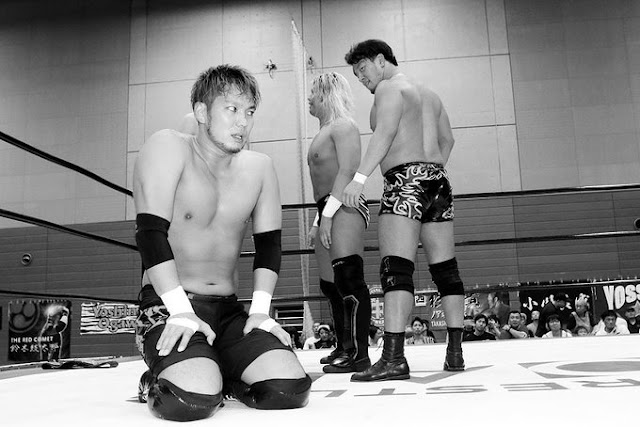 Kenoh’s jealousy of Kaito Kiyomiya continued in a Kongoh vs Kiyomiya, Shuhei Taniguchi and Alex Hammerstone match, where he shoved Kiyomiya after he held the belt up to him. Kiyomiya rebounded and got in his face, with the referee separating them. Kenoh made a point of making a beeline at Kiyomiya when he could, which is something Kiyomiya reciprocated – one time knocking him off the apron, and Kenoh threw a tantrum.

Kitamiya has now had all four league matches with two wins and two losses.

Probably the best way to describe the N-1 VICTORY match of Naomichi Marufuji vs Takashi Sugiura was to say they beat the blue hell out of each other. Afterwards, Sugiura wondered how many knees he had taken, but he emerged the victor after making Marufuji tap out of the dreaded front neck choke hold. Distressingly, Marufuji’s shoulder is once again taped, and he is starting to look swollen again, so perhaps it is for the best that he has been booked to (so far) not win any of his league matches.

Takashi Sugiura’s next N-1 VICTORY match is against Go Shiozaki in the epic showdown on the 9th September at Korakuen Hall. I would expect this match to go beyond anything we have seen before. As for Naomichi Marufuji, his last match is against Alex Hammerstone on the same night. Despite the fact that he cannot win the league, Marufuji says he will try his best. Hammerstone posted on Twitter that he would send him home “with ZERO POINTS” . 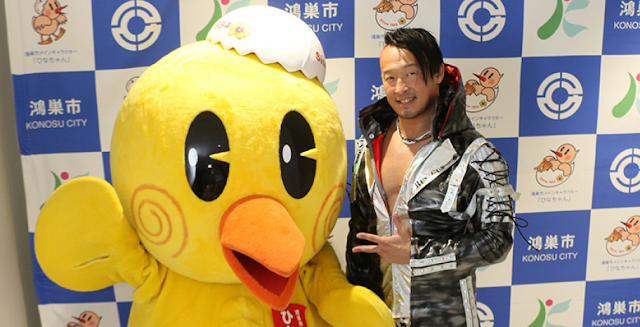 MUSCLE FEAST
In his capacity as tourist ambassador to his hometown, Naomichi Marufuji (in association with a committee called the “Muscle Feast Executive Committee”) have created a crowd funded event for the area, which will feature a four match card from NOAH, and various other activities during the day. The event has received enough contributions to meet its quota.

SUPERNOVA, THE REVOLUTIONARY TRAVELER AND THE LAST WYVERN
Pro Wrestling NOAH have announced that the nicknames of Kaito Kiyomiya, Atsushi Kotoge and Shuhei Taniguchi have now been changed. Whereas Kiyomiya was formerly “The Green Hope”, Taniguchi “Break Out” (although this was more of a Maybach Taniguchi thing) and Atsushi Kotoge the manic “Revolutionary Cloak Hero”, they are now “Supernova” (Kiyomiya), “The Last Wyvern” (Taniguchi) and “The Revolutionary Traveler”.

Atsushi Kotoge has not really explained his name (although it does seem to fit his jump back to the juniors and to a new group), and Taniguchi has said nothing on his either. Interestingly, the Wyvern is said to be a bipedal dragon (it stands on two feet), and it cannot be trusted.

Kaito Kiyomiya is the only one of the three who has explained his name change. He says that a Supernova is an event that explodes and scatters stars, which is what he wants to be in the ring.

YO-HEY and HAYATA will have the match signing for the GHC Junior Heavyweight match in the spiritual home of RATELS (only Daisuke Harada is native to the city) on the 15th September.
Nothing has been arranged for any other titles with the GHC Junior Tag still undecided, the GHC Heavyweight yet to be announced, and the heavyweights concentrating on the N-1 to be challenging for the GHC Heavyweight Tag (although it would not surprise me if The Tough challenged for it).
Daisuke Harada’s IPW Junior Heavyweight is of course being challenged for by Atsushi Kotoge, but this is IPW’S sphere (and Ben Basden is still after both the title and Harada).
NAOMICHI MARUFUJI’S BIRTHDAY
Naomichi Marufuji (much to his shock, although Ricky Fuji has told him its not the end of the world), will turn 40 on the 26th September.
NOAH have announced they will be holding a small fan birthday party for him on the evening of the 28th. The venue has not yet been announced, but my guess it will either be Yoneya (Mohammed Yone’s restaurant), or more likely “Yamada Maru”(his own restaurant which was formerly known as “Muscle Grill”).

LINKS
Yokohama Radiant Halls, Yokohama (7th September 2019) ~ YouTube*
“G-1 CLIMAX” and “CHAMPION CARNIVAL”, I want to bring it to the same level as these two”: N-1 VICTORY Kenoh interview
A Block Leader Go Shiozaki “The championship match will be with Nakajima”
B Block Leader Mochizuki “Marufuji is in my sights”

*I am unsure as to how long the show will remain in its entirety on the official NOAH YouTube channel. If it is not there when you click the link, you will be able to find the separate matches there.

King: WWE Don’t Miss This Huge Opportunity With The Undertaker