Hisame gives us all the final details leading toward the N-1 Victory and Mohammed Yone’s 25th Anniversary show!

After being told that jumping the champion after a match and having two other guys with you to beat him down was not the way to challenge for a title, and that he would need to prove himself in the ring if he wanted one by Kotaro Suzuki, Haoh has finally won his right to challenge. Haoh pinned Kotaro Suzuki at NOAH’s Kanazawa show on the 13th September. STINGER were not impressed (they very rarely are), and protested the win but as Haoh pointed out to Kotaro on the microphone, the challenge was now settled. Kotaro had no choice but to agree, and the title challenge has been set for the final night of N-1 Victory on the 11th October in Osaka. With Haoh challenging for the singles title, fans want to see Tadasuke & Nioh challenge for the GHC Junior Tag titles.

Katsuhiko Nakajima announced his typically cocky plan for the N-1 Victory, which doesn’t include winning, but rather losing every single match and winding his opponents up in the process by threatening to do things like knock them out and then get himself counted out. He has also hinted that you will “understand my true intentions soon”.

He has still not spoken of his reasons for betraying Go Shiozaki.

Struggling in the NOAH juniors where everyone has branched off into groups of three (Kongoh, STINGER and FULL THROTTLE), Daisuke Harada and YO-HEY have been at a disadvantage. After their time limit draw against FULL THROTTLE on the 13th September 2020, Daisuke Harada announced that they would be bringing in someone on the 26th September 2020 in Niigata. The identity is secret, but Harada has hinted its someone he knows well, and who shares the same “aspiration” as him. Fans are hoping this mystery person will be Junta Miyawaki (other fan theories are Hitoshi Kumano or someone from Dove).

NOAH’s senior referee, Shu Nishinaga, celebrated 30 years in wrestling on the 20th August. Nishinaga started his career when he worked part time in All Japan as a student, but everything changed one day when Giant Baba asked him to be a referee. After that he became a full time member of the promotion, and debuted in August 1990. Nishinaga would stay with All Japan until 2000 when he walked out with Mitsuharu Misawa and has been with NOAH for the last twenty years. He was handed a bouquet of flowers on the 13th September in his home prefecture of Kanazawa, by fellow referee, Nakayama. Go Shiozaki (not only the GHC Heavyweight Champion, but also the head of the NOAH Wrestlers Association), made a speech after his match to thank Nishinaga for his care of them on behalf of the roster. Touchingly, Nishinaga’s care for them goes beyond the ring as he visits shrines when on tour to pray for their health and their safety.

The full card has been announced for Mohammed Yone’s 25th Anniversary in wrestling. Himself will be wrestling twice on the card, and some old friends from both NOAH and BattlArts will be joining him in the main event. In addition, THE LEAVE (NOAH’s long term sponsors), will be sponsoring a match which contains three mysterious masked wrestlers. Nothing has been announced regarding if the event will be broadcast yet. 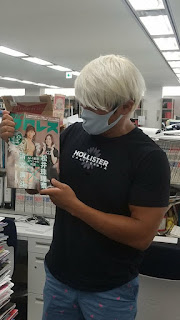 ~ Kenoh was so angry to see Kaito Kiyomiya on the front cover of “Weekly Pro” this week, that he actually went to the office of the magazine to complain about it. Fortunately the Editor was out at the time (he probably heard Kenoh was on his way or saw him coming and sensibly left the building).

~ Takashi Sugiura and Kazushi Sakuraba appeared on Battlemen this past week, and hinted at new members joining The Sugiura Army

~ Takuma Sano will have his farewell to wrestling in Osaka on 11th October. This is not exactly a retirement (veterans of his generation do not like that word and refuse to use it unless they absolutely have to), more of a goodbye to wrestling as he will now concentrate on his restaurant.

A sense of crisis due to a decline in presence and “Special Feelings” for “That Man”, special N-1 interview with Masa Kitamiya

Splashing water on reporters! Katsuhiko enters Kongoh and is “Reiwa’s King of Outrage”

The Green Guide to the N-1 Victory

How to watch Pro Wrestling NOAH


Let us know what you think on social media @ChairshotMedia and always remember to use the hashtag #UseYourHead!
Related Topics:FeaturedFeatured BigGo ShiozakiKenohMohammed YoneN-1 VictoryNaomichi MarufujiPro Wrestling NOAH
Up Next