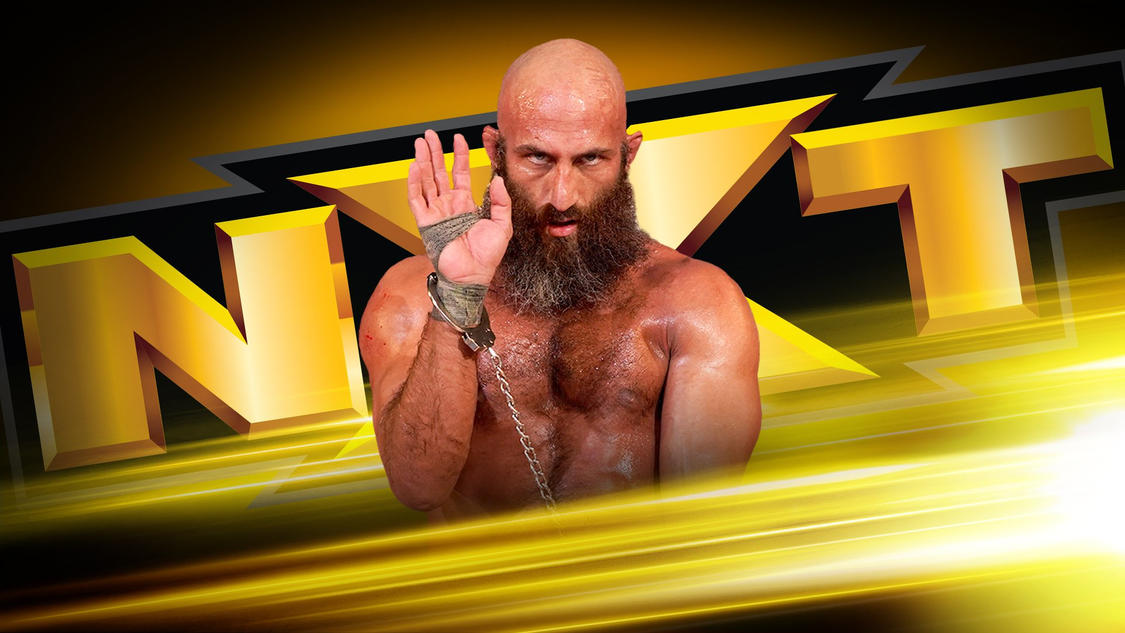 NXT takes over Chicago for a bonus night of action! What is the aftermath of all the amazing matches from TakeOver: Chicago II? Where do both the winners and losers go from here? Plus, in-ring action between the War Raiders and The Mighty! Who will kneel? Who will rise?

WWE and NXT honors the memory of Leon White, aka Vader.

In memory of the late, great, Vader. #WWENXT pic.twitter.com/fZvl1jnH0v

Big, strong and even revolutionary, he will be missed and always remembered fondly.

A true highlight reel of all the fast and furious action that went down on Saturday, June 16, 2018. From Undisputed tag team champions to a loony lass that let herself go limp, to a #OneandOnlyDream Match all about the spotlight, to a Dutch Destroyer making a Leviathan #FadeToBlack, to two men who were once friends trying to destroy each other. TakeOver brought just about everything but the kitchen sink. The only question now: what’s next?

The Captain of Team Kick overcame her fears in regards to the Queen of Spades, but can she overcome a woman who is the strongest, toughest, baddest and so much more? Or will The EST add Dakota to her fastest growing win list?

The bell rings, and Bianca pie-faces Dakota around. Bianca whips Dakota, but Dakota gets around and keeps moving to dropkick Bianca down. Dakota goes to whip but Bianca reverses. Dakota goes up and over, then rolls Bianca, ONE. Bianca waistlocks Dakota but Dakota resists. Dakota trips Bianca then runs to Penalty Kick her down. Cover, TWO, but Dakota keeps focus. Dakota goes over but Bianca pushes her back to then flapjack her onto the buckles. Bianca rams her shoulder into Dakota, then backs off to smirk. Bianca brings Dakota up, suplexes, and fans chant “EST!” as she rebound suplexes Dakota to the mat. Dakota crawls but Bianca is on her with a splash! Bianca kips up, then tells Dakota to “kiss this”.

Dakota gets to a corner while fans cheer Bianca on. Bianca twirls her hair as Dakota stands up. Bianca clubs Dakota, covers, TWO. She grows annoyed with Dakota, but brings her up for a modified abdominal stretch. Bianca adds a clawing hand, then grabs hair to thrash Dakota around. The referee counts Bianca, and she lets up. She still elbows Dakota, then pulls on hair again. Bianca bends and stretches Dakota but fans rally and Dakota endures. Bianca pumphandles and backbreakers Dakota! Dakota writhes while Bianca dares her to get up. Dakota hits back, but it doesn’t hurt Bianca. Bianca clubs Dakota down, then drags her up.

Bianca suplexes Dakota again, rebounds again, then again to show off her strength! She gets a hat trick but Dakota rolls her, TWO. Dakota trips then rolls around, TWO. Bianca runs and kicks Dakota down, then throws her by her hair. Bianca runs, but her splash hits knees! She flops to a corner, then Dakota crawls over. Fans rally for both women as they stagger up. Bianca misses in the corner, enziguri from Dakota! Both women are down, but stir. Dakota is up and kicks Bianca down. Scorpion kick then bicycle kick! Bianca gets to a corner, Dakota goes Around the World! Then, boot wash! Cover, TWO!

Dakota can’t believe it, but she knows she’s close, too. She climbs up top, but Bianca is up. Dakota jumps over, avoids the hair whip, but Bianca avoids the roundhouse to forearm Dakota back! Bianca grabs Dakota, torture rack driver! Cover, Bianca wins!

The EST impresses Chicago with her performance tonight. Racking up the wins like this, will Bianca become the  strongest, toughest, and baddest #1 contender to the NXT Women’s Championship?

The King of Flight went toe to toe and move for move with the Patrick Clark Experience, and won. What’s next? “Well like I said before,” Ricochet has shown us just the tip of the iceberg. He showed he’s not just some gif online or a bunch of flips. Ricochet showed us all that the spotlight is now on him, the One and Only.

And Velveteen Dream’s own interview.

After losing to Ricochet, where does he go next? It was #DreamOver in New Orleans, so what do you think? That’s all he has to say, but what will he do?

The Queen of Spades is joined by her fellow Four Horsewomen of MMA, Jessamyn Duke and Marina Shafir, as she speaks on her successful defense against Crazy Nikki Cross. Was there any doubt that she’d lsoe to Nikki’s madness? “You know how you defeat chaos? You suck the air out of it and put it to sleep.” #AndStill. If not even Nikki Cross can defeat Bully Baszler, then who can?

The Leviathan shocked the world when he blocked the Black Mass with one hand on NXT TV. Then he shocked us again when he slammed Aleister Black three times, just because he could. Then in the match itself, Lars Sullivan still threw the Embodiment of the End off with his superhuman sturdiness. But Aleister proved he had both toughness and intellect to match, as he focused on the giant’s jaw. It took no less than two Black Mass kicks, but finally, Lars went down and Aleister retained.

The Dutch Destroyer, sore in body as he was, had no time or energy to talk. He would hobble on into the night, victorious.

The one-two combination did not win the NXT Tag Team Championships off Kyle O’Reilly & Roderick Strong, partially thanks to Adam Cole. Chicago still showed their respect and appreciation for their efforts, but how do they themselves feel? “This is a combined 25 years of experience in the making”, of blood, sweat and tears just to get to WWE and NXT. Their first TakeOver, they came up short and they’re heartbroken, but they left it all in the ring, and you can’t ask for anything more. It was the biggest match of their careers, but the biggest loss, too. They’re disappointed, but they’re still standing. Will the Boston & British Brawlers fight their way back up towards something big?

NXT looks back to the brutality of the Chicago Street Fight.

Chicago was the location where DIY broke apart, all because of Tommaso Ciampa’s paranoia. Ciampa accused Johnny Gargano of being selfish, but Gargano wasn’t the one making life a living Hell for his former friend. In the end, even Candice LeRae wanted Gargano to “kick his ass”, and Gargano went out to do just that! So much symbolism was in every sinister and sadistic move from both men, and Gargano would bring out a darker side of himself than perhaps even he knew he had. But in the end, he would lose focus, and that would cause him to lose the match. Ciampa exposed hard wood and drove Gargano headfirst into it. The Psycho Killer would stand tall, and wave “bye-bye”. Now that Ciampa got his “moment”, is it finally over between him and Johnny Wrestling?

Like it or not… it was his moment.@ProjectCiampa #WWENXT pic.twitter.com/GWfh7Mc53S

NXT Media catches up with EC3.

What did The Top One Percent think of TakeOver: Chicago II? “Is there anything like it?” That show proved why NXT is THE top brand in sports entertainment. It had thrills, chills, action and excitement, but it didn’t have EC3. He isn’t promising, he is proclaiming: The Top One Percent will be at 100% of TakeOvers going forward. EC3 has been building this brand into #NX3 with #VictoryAfterVictoryAfterVictory. He claims to be the best here, the best there, the best anywhere, but he’s going to prove it. EC3 is going to kick the doors wide open to demand the top tier of competition available. In other words, EC3 is calling his shot. And when he calls his shot, he doesn’t miss. Who is he aiming for? “Everybody!!”

The War Raiders VS The Mighty!

War comes to Chicago as Ray Rowe and “Warbeard” Hanson look to show Shane Thorne & Nick Miller what it’s really like to be mighty. Forget kneeling, will Thorne & Miller still be standing after this match?

#TheMighty vs. #WarRaiders. Who's leaving with the W tonight?! #WWENXT pic.twitter.com/qFskgY87QF

But as The Mighty have done, they use some sneakier tactics, as they throw their fancy new dusters at Rowe & Hanson! The Mighty put Hanson on the outside, then stomp away on Rowe. The referee backs Thorne & Miller off to check on Rowe. Rowe simply demands this match begin! The bell rings, and Rowe hits Thorne with shotgun knees! Miller comes in, but gets thrown overhead! Miller slumps out, Rowe tags in Hanson. Fans chant “War! War!” as Hanson is whipped into squash Thorne, then Rowe picks Hanson up for the human weapon hip attack! Fans fire up as Hanson tags back to Rowe. Rowe stalks Thorne, and brings him up for the lift. Hanson climbs but Miller pushes him down!

Rowe goes after Miller, but then Thorne clobbers Rowe. Thorne rolls Rowe and even puts feet on the ropes! TWO, because Miller wasn’t there to help anchor him. Thorne hurries up to knee Rowe down, then tags Miller. Miller drags Rowe up and drops ax handles and crossface punches. Fans boo, but Miller keeps going. Rowe shoves Miller away but Miller knocks Rowe out of the ring. Miller distracts and Thorne gets a cheap shot in! Thorne puts Rowe in, then tags in. The Mighty pick Rowe up, back drop neckbreaker! Cover, TWO! The Mighty are shocked and furious but fans rally up for the War Raiders.

Thorne goes after Rowe in a corner with European Uppercuts. Rowe shoves him away, then they brawl. Rowe fights out of the Mighty’s corner, but Thorne dropkicks him back down. Thorne goes to hit Hanson, but Hanson intimidates him with a roar. Thorne goes back to Rowe, but his senton misses! Hot tag to Hanson! Hanson throws Thorne with a back drop, then side slams Miller, before squashing him with a splash! Hanson picks up and swings Thorne for a slam. Miller dodges but ends up in a seated senton! Hanson cartwheels past Thorne to clothesline him down!

Fans are all fired up, and so is Hanson. Hanson tags Rowe, “War! War!” echoes out, as Hanson feeds Thorne to Rowe to pop Thorne up for Thor’s Hammer! Cover, but Miller breaks it! Rowe throws Miller out, and Hanson DIVES! Hanson wipes Miller out, but that’s not all. War Raiders regroup, Rowe gives Thorne the Ace Ten Mao! Tag to Hanson, and Hanson climbs. Rowe drags Thorne up, FALLOUT! Cover, War Raiders win!

The warpath continues, and no one is safe. Will the NXT Tag Team Champions have to worry about a truly threatening team coming for their gold?

For those who don’t know, post-TakeOver episodes of NXT are never that big of a deal, as they’re actually filmed before TakeOver. It’s just through the magic of editing that it all feels like a post-show. All the interviews featured were great, and fitting of each character’s story after the event. The matches were actually alright tonight. Bianca VS Dakota was great for an opener, and honestly could’ve been the main given how great Chicago reacted to Bianca. War Raiders VS The Mighty was so quick, but also as exciting and well-received. As I’ve been saying, we must be getting War Raiders VS Undisputed Era in this next arc, and hopefully Bobby Fish will be healed by then for a proper match-up of ROH teams in NXT.