Coming off very successful events against Wrestle Kingdom, NOAH has an interesting course to navigate for the future. Hisame gives us all the updates!

“A NEW SUNRISE, DAY1”
Pro Wrestling NOAH started 2020 with a bang, by going head to head on the 4th January 2020 with New Japan at the neighboring Tokyo Dome, while they held their show at Korakuen Hall on the same night.

NOAH may have been running the show head to head with New Japan, but they started later, and as a result by the time the main event and Jyushin Liger’s retirement match were over, NOAH were still running, so it meant that once people had seen these matches they could come to Korakuen (and still did), but by the time NOAH had their own main event, Wrestle Kingdom was over, and if people left (some did), they could only go home.

Despite the concerns that many fans (quite validly) had on social media, NOAH sold the house out with 1,579 people.

Alongside the return of Doug Williams (who will touchingly do anything for NOAH), NOAH put all the titles (except the GHC Heavyweight tag) on the line that evening. 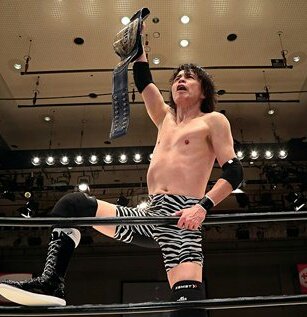 There are only three people left from the All Japan dojo now in NOAH, and those three are Naomichi Marufuji, Takashi Sugiura and Yoshinari Ogawa. Out of twenty years of NOAH (and despite the fact that he has held the GHC Heavyweight once), Yoshinari Ogawa has never ever challenged before for the GHC Junior preferring to concentrate more on teaching the roster, and chasing the GHC Junior Tag titles. After weeks of torturing HAYATA, and flanked by RATELS and STINGER, Ogawa and HAYATA finally faced each other for the GHC Junior Heavyweight title. Tonight there was no throwing in of the towel or tapping out, and HAYATA had to endure everything; a relentless attack on his legs, his feet, and even his neck. Despite HAYATA’S torment, Ogawa taking two moonsaults, and a HAYATA dive over the top rope, the man in his 50s prevailed, and held the championship for the very first time to the delight of the fans.

However, this being Ogawa (and he never goes about anything without having another purpose), he made a cryptic comment before the match that if he won he would “destroy everything”, and while he didn’t turn on STINGER or announce he was leaving them that evening (or the next), he did shake hands with HAYATA, and HAYATA seemed to give it without hesitation…Ogawa made another cryptic comment to the affect that he had something special planned for RATELS.

It is indeed, The Year of The Rat.

Takashi Sugiura and Masa Kitamiya put on a brutal fight for the GHC National Championship, deploying brutal elbows which almost knocked each other out, rugby tackles and dangerous suplexes off the apron in their fight. They also resorted to using each others moves to try and get the win, with Sugiura using The Saito Suplex, and Masa Kitamiya using the Olympic Slam. Takashi Sugiura prevailed after 20 minutes and 32 seconds, and so retained the championship.

Afterwards he said that never mind it was his 20th anniversary in wrestling this year (it is also NOAH’s big 20th anniversary year), he said that his real celebration would be in not losing the belt to anyone, and not losing to anyone in general, especially not to Go Shiozaki and Kaito Kiyomiya in the main event, and especially not to anyone at The Tokyo Dome. 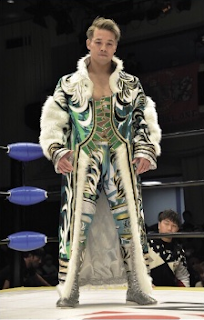 The main event of the evening was Go Shiozaki (the challenger) versus Kaito Kiyomiya (the GHC Heavyweight champion).

Much to everyone’s surprise, Go Shiozaki came to the ring wearing an almost identical version of Kaito Kiyomiya’s ringwear (except he wore long pants). As Kenta Kobashi (who is on hand in title matches to hand the title to the winner, and to do commentary) looked on, they fought over the title with Kiyomiya showing a sadistic side as he worked on Shiozaki’s notoriously bad elbows. The match was so brutal that Kiyomiya walked out of it with a semi black eye, a body so sore that he couldn’t sleep, and without the GHC Heavyweight title.

Go Shiozaki defeated Kiyomiya in 27 minutes and 42 seconds via moonsault, and ended the reign of the youngest champion in GHC Heavyweight history.“KORAKUEN HALL DAY2 REBOOT”

The atmosphere on night 2 was a lot more relaxed. NOAH did not have to worry that night about competing directly with New Japan, as they were holding their show in the evening, and NOAH held theirs hours before in the afternoon.The card itself was a mystery, and was announced only by entry themes. There were going to be a few surprises on the night, especially as NOSAWA Rongai was introducing the newest member of The Sugiura Army, who would also join Global Junior League, and The Sugiura Army.There was going to be one more shock surprise too…

Quiet Storm in a rare singles match faced off against Mohammed Yone. Yone beat him with the Kinniku Meat Buster.

Kongoh’s Hao and Nao took on The Sugiura Army’s Hajime Ohara and Kinya Okada, but they had too little chance to celebrate their win (it only took 3 minutes) as two masked men entered the ring, bundled up to the neck in what looked like black jumpsuits. Fans wondered who they were – could they be a lucha team entering from IWRG? These masked men offered Kongoh a handshake, before beating them up and throwing them out of the ring. They then unzipped their jackets to reveal they were members of The Sugiura Army (and wearing NOSAWA’S dog t-shirts), removing the masks fans discovered that one was NOSAWA, and the other was Dick Togo, who announced he would enter both Global Junior League, and The Sugiura Army.

Michael Elgin wiped out Masao Inoue in 8 seconds. Inoue said he was not going to seek revenge by following him to America, it was too expensive.

Kaito Kiyomiya made his first appearance without the belt, he came out looking tired and nervous, and worried that fans would either not care about him, or be angry at him for losing. However, he didn’t have to worry, he was given a warm reception.

RATELS teamed up with Keiji Mutoh against STINGER and Doug Williams. Mutoh said he was encouraged by the vitality of his young partners. To HAYATA (although naturally he has said nothing), this match meant a lot as Keiji Mutoh is his hero, and is the reason he uses both the moonsault and paints his face for title matches.

YO-HEY, however, is not as shy as HAYATA and had no problems in asking Mutoh if he could do the Shining Wizard on Yoshinari Ogawa (and as YO-HEY took so long messing around, when he did it, Ogawa had moved). Tadasuke went made, and Atsushi Kotoge got the “YOU” finger for interrupting his mad rampage around the ring. Mutoh looked on, and Harada looked like he wanted to tell him that he would wear himself out.

The match was won by Keiji Mutoh using the Shining Wizard on Kotaro Suzuki, and as he celebrated with his young teammates, Ogawa could be seen in the background, on the apron, staring at HAYATA… 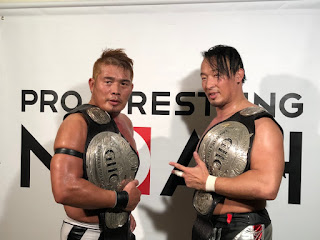 The main event was a surprise GHC Heavyweight championship tag match when Naomichi Marufuji and Masaaki Mochizuki teamed together to take the GHC Heavyweight tag titles from AXIZ (Go Shiozaki and Katsuhiko Nakajima).

By the time this match ended, everyone was wearing a bright red sunburn on their chests from various kicks and chops, and the beginning of what could well turn out to be slight friction between AXIZ (which may build up to a title match), when Go Shiozaki was had his back turned to Nakajima and Mochizuki trying to keep Marufuji out of the ring, the crowd screamed for him to look as Mochizuki reversed the pin on Nakajima, and AXIZ lost the GHC Heavyweight tag titles.

Nakajima protested to Shiozaki, and Shiozaki protested to the referee, who told him sorry no, but it was three. The titles were gone.

Backstage Nakajima tried to apologise, but Shiozaki philosophically said that it didn’t matter, a loss was a loss, and that AXIZ would survive.

I have the feeling that Nakajima will see this as all being very well and good for Shiozaki, he has the GHC Heavyweight still, and no doubt will challenge him for it.

When it came to their own interview, Mochizuki suggested the name as “MM” for their new tag team, while Marufuji unveiled plans for building his own stable using outside people from NOAH, taking the belts to Dragon Gate, and aiming to win the “Best Team award” at the end of year Tokyo Sports Awards.

ELSEWHERE IN NOAH
~ Daisuke Harada autographed Tadasuke
~ Naomichi Marufuji has made a return to DDT, joining the Disaster Box stable. He will make a further appearance for the promotion January 26th to have a singles match with Kazuki Hirata.
~ Akitoshi Saito compared Masao Inoue getting the win over Mohammed Yone at the first night of Korakuen Hall as being like a “weevil kept in a fridge”.
~ Kenoh (firing on all cylinders) attacked Hideki Suzuki after their match at Korakuen Hall screaming obscenities, it took Yoshiki Inamura to keep Kenoh away from him. Suzuki told him to “go home”.
~ Naomichi Marufuji and Shuhei Taniguchi visit the upcoming boat race event part 2 is coming up (on this one they have to compete for tickets. It might be best for Taniguchi to just let Marufuji win).

Quiet Storm to leave NOAH
Quiet Storm will wrestle his last match on January 30th before his contract expires on January 31st, after which it is assumed that he will be a freelancer. Quiet Storm has not announced his plans for the future, but has said how much he has enjoyed being in NOAH. Understandably, Mohammed Yone is sad to lose his tag partner, and said the time they spent as a team was fun.

Katsuhiko Nakajima in W-1
Predictably, the more biddable Kaito Kiyomiya caused no trouble when he and Katsuhiko Nakajima visited W-1 over New Year, but Nakajima and his partner, Daiki Inaba did not get along. Backstage, Nakajima told Inaba that although they both had belts, his was dull, and he wasn’t interested in challenging for it. Inaba said that he wasn’t going to take this from Nakajima, and he was nominating him as partner. Too bad if he didn’t like it.
Nakajima said he really wasn’t interested, and walked off.

Inaba went to WRESTLE-1’S manager, Kaz Hayashi about this, and Hayashi told him to participate. Nakajima asked if Hayashi had heard that he said that he wasn’t interested, but saying that he was a gentleman, and that he didn’t want to let the fans down who were “demanding him”, he relented to the match which has been set for the 12th January. Nakajima has warned that he will do the match, but he will crush Inaba.

Global Tag League 2020
The heavyweights have their first tournament of 2020 when they compete in the annual tag league. The event will run from Friday 27th March until Saturday 18th April. Teams to be announced.

BROADCASTS
“A NEW SUNRISE, DAY1” will be broadcast on 14th January 2020.
NOAH have not announced any further broadcast dates or upcoming live streams.