WWE TLC was another disappointing outing for Seth Rollins. Steve Cook digs in to see what might be ailing “The Architect” on WWE PPV.

It’s the time of year where every wrestling writer affiliated with a website or blog or Facebook page is completing their Year-End Awards ballot. A tradition unlike any other. Readers love award columns because they like to discuss how the writers got them completely wrong, and who the winners of awards should be. It’s great debate fodder. I, admittedly, am terrible at them because I forget a lot of things that happened over the course of a year. Sometimes I forget what I did last week, so I can’t be trusted to remember who the top wrestlers of January were.

The Wrestler of the Year Award is always an interesting one to discuss. Every year presents many viable candidates, but a consensus typically forms around four to five main contenders. I suspect that one of the main contenders of the 2018 Wrestler of the Year Award will be Seth Rollins. He’s got the reputation of being one of WWE’s best in-ring workers & his matches typically get rave reviews from all the experts. A list of Best Raw Matches of 2018 would include plenty of Seth’s Intercontinental Championship defenses & challenges, along with some tag team matches & other assorted things the Architect took part in.

From where I sit, there’s one major argument against naming Seth Rollins Wrestler of the Year. That would be the fact that he’s had two high-profile PPV matches end up as complete flops. It’s not like Rollins was saddled with the dregs of WWE, or stuck in storylines that nobody had interest in. Dolph Ziggler’s issue with Rollins over the IC strap went back months & produced a number of Raw matches that people loved. Dean Ambrose & Seth have been on-again off-again Shield brothers, and their recent feud that kicked off just after Roman Reigns went out of action should have had the interest of any crowd of WWE fans. Neither match connected with the crowd in the arena, nor with most of the people watching at home that were on blogs, websites or social media talking about it.

Now, there are plenty of Rollins supporters out there that will go to bat for both matches. They’ll claim that the IWC critics don’t know what they’re talking about & it’s the live crowd’s fault for not enjoying the show. If they were writing this column, they could make that argument. They’re not. I’m one of those darn critics that doesn’t blindly enjoy everything & notices when something’s not working.

Why aren’t Seth Rollins’ major matches working? I have some ideas as to why…

Placement of the match I think most people would agree that neither match was properly placed on its card. Rollins & Ziggler had no business main eventing Extreme Rules. For one thing, Ziggler’s never been taken seriously as a main event talent. He hasn’t been pushed at that level, and while he’s been popular at times, the majority of the WWE Universe hasn’t been begging for a Dolph Ziggler main event push for any lengthy period of time. Rollins has been main event level, with the right opponent, but he can’t elevate somebody like Dolph to that level. Furthermore, it was Extreme Rules, and the match wasn’t extreme at all. If you’re going to name a show Extreme Rules, the featured match needs to utilize various types of plunder, go all over the building and generally result in anarchy. Rollins vs. Ziggler wasn’t that.

When the reaction to your main event is “wait a minute, these guys are going on last?”, it’s not a good sign for things to come.

Rollins vs. Ambrose was placed in the semi-main event position at TLC, between the WWE Championship match pitting The New Daniel Bryan against AJ Styles, and the SmackDown Women’s Championship TLC match with Becky Lynch defending against Charlotte Flair & Asuka. I don’t think Bryan & Styles are capable of having a bad match with each other as opponents, so anything following them is going to have its work cut out for it.

WWE used to place matches of little interest in the next to last spot on their PPV cards in order to give crowds time to relax & get ready for the main event. They haven’t been doing that lately, and matches like Rollins vs. Ambrose have ended up in a tough spot. People might be interested, but they’re worn out from the last kickass match & could use a little breather before the match they have the most interest in. TLC definitely had the right match going on last, as The Man’s issue with Flair, Asuka & anybody else in her path has been the most compelling part of WWE television lately. Also, there was the TLC stipulation, so it kinda made sense.

If Rollins & Ambrose didn’t go out there and, pardon the expression, burn it down, they were going to get eaten alive by the crowd. That’s exactly what happened. They couldn’t follow Bryan & Styles, and they weren’t good enough to make the crowd want to wait for Becky. So they chanted “WE WANT BECKY”, among other things.


Listening to the crowd 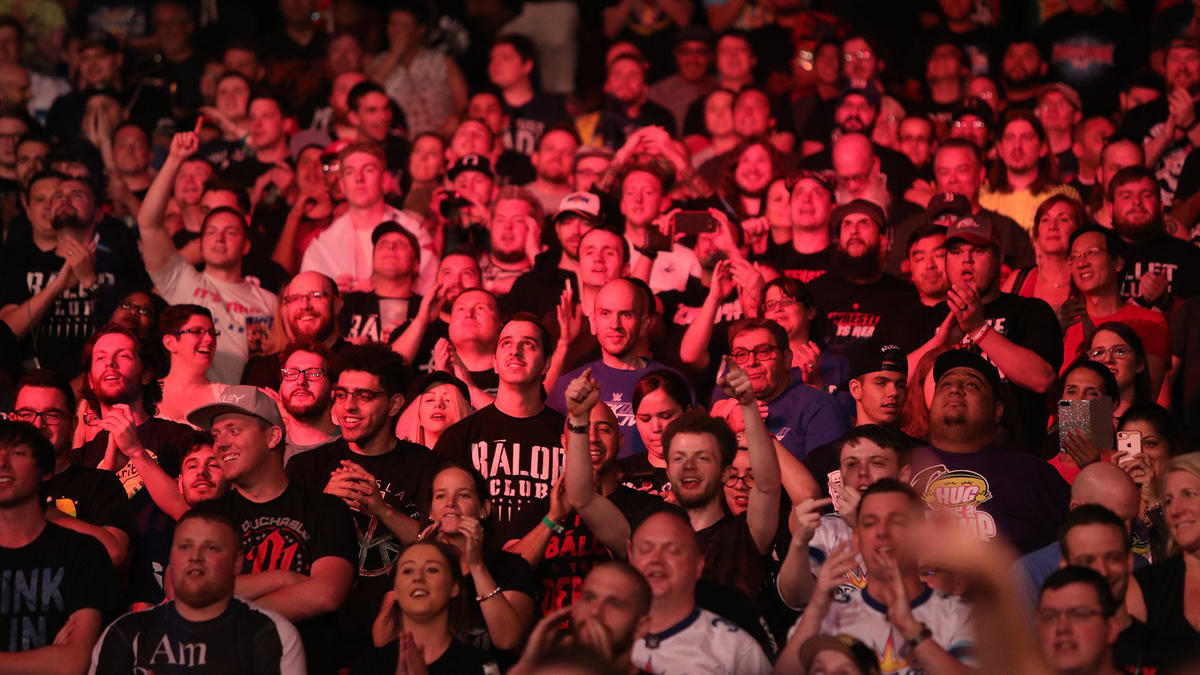 As much as some critics want to dismiss what a live crowd thinks sometimes, the fact of the matter is that live crowds are the truest barometer of what’s working & what isn’t. Crowds vary based on location & demographics, but generally speaking, a pro wrestling crowd is made up of people that are passionate about the artform. Whether it’s a football stadium filled to the rafters for a WrestleMania, or a half-empty arena for a TV taping, the people in attendance go to the show because they love the product. They probably don’t love everything on every show, but enough things strike their fancy that they keep coming back.

The best wrestlers have learned how to read crowds after years of performing in front of them. They know when the audience is reacting the right way. If the fans don’t react the way that’s expected, the wrestlers know that something’s wrong. The best wrestlers (referees are valuable with this too) are able to adjust on the fly. They don’t keep doing things that aren’t working, assuming they’re going to jump on board eventually. Obviously they end up arriving at the same conclusion, they just take a different route than originally planned.

Both matches were prime examples of wrestlers not listening to crowds. They kept running through their stuff and doing things that weren’t getting the proper reaction, because they knew better than the fans. Rollins’ response to the Ziggler match failing was to blame the fans.

He hasn’t reacted on social media as of the time I’m writing this, which at least indicates he’s learned that complaining about the crowd in public isn’t a good look for a top babyface. As far as the San Jose crowd itself goes, they were popping for most stuff all night, so you can’t make the argument that they just didn’t like anything. They seemed like the kind of crowd WWE should want at all their events. We can’t fault them for getting restless during the eleventh match out of twelve. People loved those Rollins vs. Ziggler matches on Raw. One argument I’ve seen from multiple people about their matches is that it doesn’t matter if they always wrestle each other, It’s great every time. This was how people defended Ziggler accepting Rollins’ open challenge a few weeks back. Fans hoping for something different were let down, but Rollins vs. Ziggler fans were pleased as punch.

Me, I’m one of those guys that likes to see something different. One of my gripes with modern WWE is that we often see the same matches over & over & over again. WWE has done this throughout its history, but that was more excusable when they mostly ran house shows and not everything was on television. Those of us that were spoiled by the Monday Night War & television that wasn’t repetitive don’t get excited for the fifth time Rollins vs. Ziggler is booked in two months.

Some guys make do anyway. It’s not like Sunday was the first AJ Styles vs. Daniel Bryan match we’ve seen in awhile. It was the first one we’ve seen with The New Daniel Bryan, though. That made everything different. Even when there aren’t radical character changes involved, Styles & Bryan tend to switch up their matches on a regular basis & have endless amounts of things they can go to.

Rollins & Ziggler, to me, didn’t feel that way. Rollins matches in general don’t feel that way to me. There are certain spots he has to hit in every single match. Regardless of what’s happened in the match, he has to be able to do his running powerbomb, his superplex into a Falcon Arrow, repeated suicide dives & other ones I’m forgetting. Even if he’s spent the match getting his knee worked over & the announcers put over his previous knee issues, he’s still gotta get his stuff in, man.

Some say it’s an indy mindset, brought on by guys needing to get all their stuff into every match so they can get noticed. But it goes at least as far back as Ric Flair. Naitch did all of his trademark spots in every match because he felt he was short-changing the fans if he didn’t. Bret Hart mocked Ric for this, though he too had his routine.

Rollins’ fans love his spots and don’t see this as a problem. The thing is that once the people find out all you’ve got, they want something more. John Cena & Roman Reigns both ran into that issue & often got called out for doing the same ol’ stuff. Cena has enough self-awareness to do things like unveiling a sixth move of doom.

How can this change? This is definitely a fixable issue. All I think Seth Rollins needs to do is listen to the crowd & maybe do something a little different every once in awhile. Maybe work in some psychology here & there. He’s got the tools that Internet fans love, and he’s got fans in high places.

WWE can also help him out by shortening the shows up a bit. Or maybe he could tone it down a bit. His Raw matches never have the problem some of his PPV stuff has. I understand why, having been to Raw tapings before. There isn’t as much actual wrestling on Raw. By the time there is some you’re ready to pop for anything that’s decent in-ring action. Shows with twelve matches on them? That’s going to be a harder to impress crowd.

As the saying goes: Once is a fluke. Twice is a coincidence. Three times is a trend. Seth Rollins is approaching trending levels, and not in the good way that WWE typically trends on social media during their shows. I think he’ll turn it around.


Let us know what you think on social media @theCHAIRSHOTcom and always remember to use the hashtag #UseYourHead!
Related Topics:FeaturedFeatured BigSeth RollinsWWE PPVWWE TLC
Up Next

When Will Triple H Take Control Of WWE?